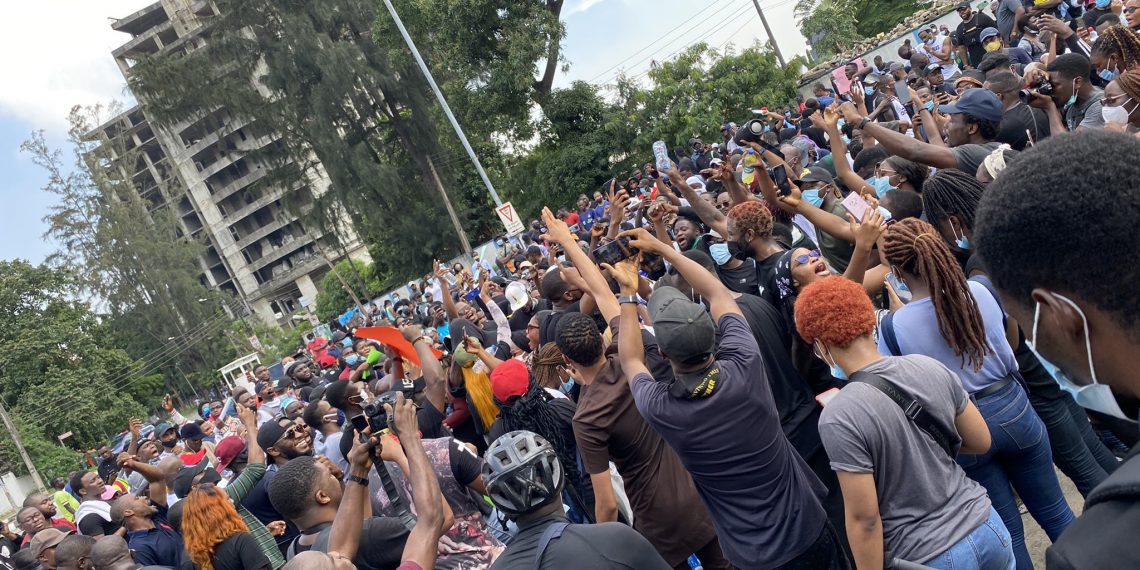 #ENDSARS: Protests continue in Lagos despite dissolution of the police unit

The protesters insist that the terms of the IGP are not acceptable to them.

Nigerian youth clamouring for the disbandment of Special Anti Robbery Squad (SARS or FSARS) in Nigerian have remained on the streets of Lagos, hours after the government bowed to their requests.

The Inspector-General of Police (IGP), Mohammed Adamu, has announced the dissolution of the dreaded police formation, following the nationwide #EndSARS protest.

The IGP made the announcement on Sunday afternoon during a press conference at the force headquarters in Abuja.

However, the protesters insisted that the terms of the IGP are not acceptable to them, particularly the points two and three on the list.

Signed by the Police PRO, Frank Mba, the two terms stated that all officers in the disbanded unit will be redeployed to other formations and units; and that a new policing arrangement for tackling violent offences will be unveiled to the public.

Maintaining that the struggle is not over, the youth took the protest from the usual take-off point at the Lagos State House of Assembly at Alausa to Opebi through Allen Avenue and back to Alausa through Opebi Link Road.

They were heard chanting protest lines like “end SARS immediately”, “No dey disguise”, “send SARS to Sambisa”, “Nigerians are not criminals”, and so on.

One of the protesters, Israel Ogunsheye, told PREMIUM TIMES that the announcement of the IGP only means that they will be putting old wine into a new bottle.

“We are still not safe. Those criminals will still be carrying weapons and will still be out there. We need the government to take action and get those guys off the force. Until uniform and arms are completely taken off them, we cannot feel safe,” he said.

“How are we sure that we will not continue to live in fear?” asked Tola Akinola, another protester.

“It is still the same guys we are saying we don’t want that they want to put in charge of our safety. Who does that? Are they trying to fool us to stop the protest? We have heard this before and until proper action is taking, we are not sitting this one out,” she said.

PREMIUM TIMES had reported that the protests started on Thursday led by some Nigerian entertainers, Falz and Runtown, and youth have been coming out everyday to continue the protest.

Plans have also been made for the protest to continue across the nation in the coming week.

‘This is just the beginning of new Nigeria’, Wizkid, others react to SARS disbandment