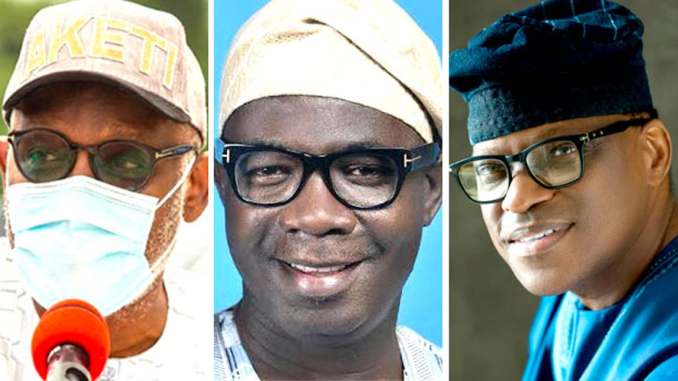 The credibility of the 2016 Ondo gubernatorial election was widely contested, with evidence of vote-buying, and other electoral fraud documented.

With the Ondo State gubernatorial election only two days away, preparations for the election by the Independent National Electoral Commission (INEC), political parties, gubernatorial candidates, security agencies, and voters are in top gear.

The election, which will hold on October 10, has gubernatorial candidates from 17 political parties in the state with three top contenders from the All Progressives Congress (APC), People’s Democratic Party (PDP) and Zenith Labour Party.

Rotimi Akeredolu (APC), Eyitayo Jegede (PDP) and Agboola Ajayi (ZLP) are the frontrunners of the elections. Mr Akeredolu is the incumbent governor of the state, while Mr Ajayi is the deputy governor, both were elected under the aegis of the APC.

With the Ondo election drawing nearer, several predictions have emerged on the possible winner among the three frontrunners.

The November 26, 2016 election in Ondo State was fiercely contested by four major candidates from the APC, PDP, and Alliance for Democracy (AD), SDP and 24 others.

Rotimi Akeredolu of the APC emerged the winner of the election after polling a total number of 224,842 votes, defeating 27 other candidates.

Mr Jegede of PDP came second in the election with 150,380 votes while Olusola Oke of the AD polled 126,889 votes, placing him in third place.

Ondo, a state with a population of over 3 million people, had 1,647,973 registered voters in the 2016 election. Out of this number, 584,997 voters were accredited on election day. This is less than half of the registered voters.

The credibility of the 2016 Ondo gubernatorial election was widely contested, with evidence of vote-buying, and other electoral fraud documented.

In a report by Punch Newspaper, members of APC and PDP were seen giving money to voters at various polling units.

PREMIUM TIMES also reported how many police officers deployed for the 2016 Ondo election accepted money from party agents and chieftains at polling units. This is in addition to other unprofessional conducts observed during the election.

Recently, PREMIUM TIMES reported how a former secretary to the Ondo state government, Sunday Abegunde, who resigned in July, said the incumbent governor, Mr Akeredolu did not win the 2016 election.

Mr Abegunde said himself and others helped the governor manipulate the 2016 election.

After the just concluded election in Edo State in September, where the electoral body was credited for a largely free and fair election, expectations for a credible election in Ondo State are high.

Despite reports of vote-buying, intimidation of journalists and observers during the election, observer groups such as Yiaga Africa and Centre for Democratic Development said the election was relatively credible.

Pre-election violence has however trailed Ondo state as the supporters of the two major political parties in the state, APC and PDP clashed on Sunday leaving many injured.

There have seen several reports of pre-election violence in the state which left many organised bodies predicting that the Ondo 2020 election might be marred with violence.

Trump refuses to take part in virtual debate with Biden