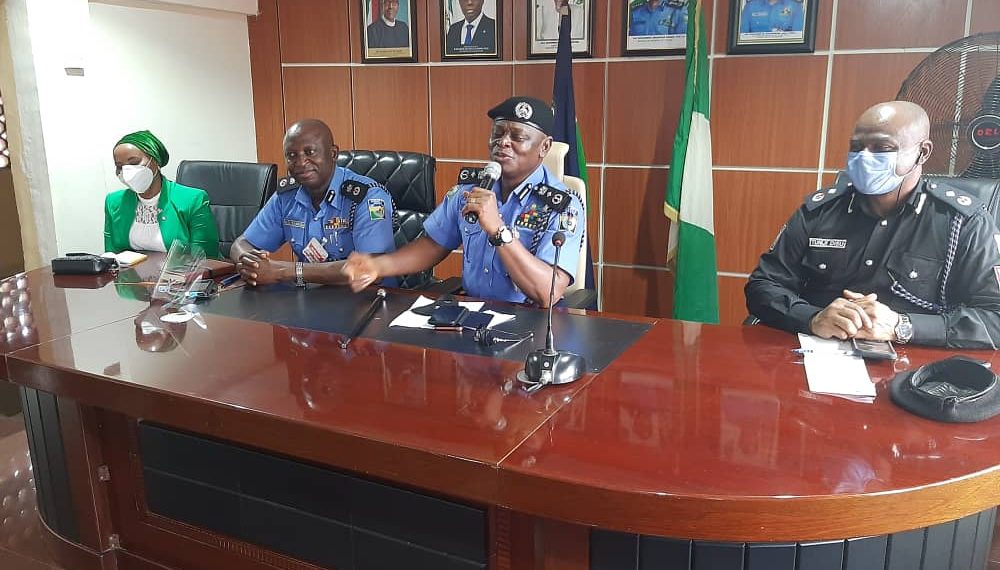 Police warn against protests as #RevolutionNow insists on rallies

Following the cancellation of the Independence Day parade and a ban on gathering of more than 50 persons by the Lagos State Government, the police have warned against people gathering in the state for protests and rallies.

However, the Coalition for Revolution (CORE), the organisers of the #RevolutionNow protest, says its mass action will hold as planned, despite the police announcement.

The position of the police was contained in a press release by the police spokesperson in Lagos, Olumuyiwa Adejobi, on Wednesday.

He said the Commissioner of Police in the state, Hakeem Odumosu, has instructed officers to prevent any unlawful societies, under whatever disguise, from staging rallies or protests within the state on Thursday.

“The police boss read the Riot Act today during a security meeting with the area commanders, divisional police officers and heads of department at the conference room, state headquarters, GRA, Ikeja on Wednesday.

“While the Commissioner of Police announced the cancellation by the Lagos State Government of the ceremonial parade to commemorate the Nigeria’s 60th Independence Anniversary, he warned that the command will not allow any gatherings, rallies or protests against the sovereignty of Nigeria in the state,” he said in the statement.

He said the commissioner further urged parents and guardians to warn their children and wards not to attend any rallies, protests or be mobilised to “wage war against the government of the Federal Republic of Nigeria,” or else they (parents or guardians) of any youth arrested for such act would be prosecuted, the spokesperson added.

The police appealed to the general public to be law-abiding, desist from violence and any act that is capable of disrupting the sovereignty of Nigeria.

He added that the police had been charged to maintain law and order in the state and repel any force seeking Nigeria’s disintegration.

The Coalition for Revolution (CORE), the organisers of the #RevolutionNow protest, says its mass action will hold as planned, despite the police statement.

The group formed by a former presidential candidate and SaharaReporters publisher, Omoyele Sowore, is demanding improved healthcare and security, good governance, transparency and accountability of public officers in Nigeria.

CORE had earlier called on Nigerians to participate in the October 1 protest in state capitals across the country by 8 a.m.

The demonstration, according to the group, is to demand the reversal of “anti-people policies implemented by the President Muhammadu Buhari-led administration.”

Amongst its demands, CORE clamoured for the reversal of the hike in the price of Premium Motor Spirit (PMS) from N148 to N151, the resignation of President Muhammadu Buhari and the sack of all service chiefs in the country due to their failure to end the Boko Haram insurgency.

Others include respect for the rule of law and an end to the victimisation of critics and extra-judicial killings by law enforcement officers.

Meanwhile, in a statement signed by the Conveners, Baba Aye and Gbenga Komolafe, on Wednesday night, the group said the police in some states had issued threats against the planned demonstration.

Security forces had disrupted previous protests by the group and arrested some protesters.

“We want to make it clear that we remain undeterred and the protest cannot be stopped. When in our national anthem it is said “the Labour of our heroes past shall never be in vain” we remember clearly that the labour of real heroes of independence was struggle: protests that were not deterred by the colonialists repressive tactics.

“These and the thousands of working-class class people and youths who took to the streets and downed tools in the workplaces are the heroes of what was won 60 years ago but which was bastardized by the thieving elites who took over power.”

They also urged Nigerians to come out en masse to reclaim their dignity and win a better life.

“We call on all Nigerians not to succumb to intimidation. Our peaceful protests against the elites’ corruption, our state of poverty and underdevelopment of the country shall proceed as planned,” the statement read.