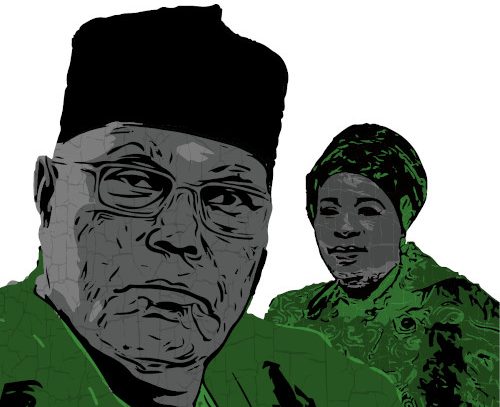 Atiku blames his political enemies for a report showing his financial dealings are being scrutinized by the U.S.

Nigeria’s former number two, Atiku Abubakar, went off the tangent on Tuesday as he reacted to a PREMIUM TIMES report on how he was placed under international banking surveillance by authorities in the United States.

A statement by his media office suggested the report, which is part of a global financial investigation involving 110 media organisations, had local political motivations as it was published two days after the politician’s party, the PDP, won Edo governorship election in Nigeria’s Niger Delta region.

But the investigation leading to the report had been in the works for 16 months and the publication date was set globally by the partners early this year, long before a date was fixed for the Edo election.

Based on leaked confidential financial reports filed to the US government’s Financial Crimes Enforcement Network, FinCEN, the report revealed that transactions linked to Atiku was flagged as suspicious due to past money laundering and corruption investigations in Nigeria and the United States.

FinCEN Files, a collaborative investigation by the International Consortium of Investigative Journalists, BuzzFeed and 108 media partners across the world, including PREMIUM TIMES, involve a large volume of confidential financial reports relating to the transaction activities of world leaders, terrorists, drug dealers and money launderers.

The findings relating to Atiku, as reported by PREMIUM TIMES, had never been published or disclosed and it is unlikely the politician is aware his financial dealings were being scrutinized by U.S. authorities

Although they relate to some subjects in Nigeria, like Mr Abubakar, the suspicious activity reports, SARs, filed to FinCEN flagged subjects in 170 countries.

“Based on the negative information associated with parties identified, HBLNY has added Atiku Abubakar (the former vice president of Nigeria), Rukaiyatu Atiku Abubakar, Amina Atiku Abubakar, Massimo Del Celo, Uyiekpen Gboyega Giwa-Osagie, Tanjay, and GTCN to its internal automated real-time suspicious transaction monitoring for further surveillance of potential suspicious activity and this SAR is being filed against all parties listed,” one SAR said.

Years after Atiku was added to HBLNY’s suspicious activity monitoring system, another SAR filed in 2017 and showing 27 transactions totalling $11,140,357 involving Intels (a company in which he has an interest) and channelled through Deutsche Bank Trust Company Americas, DBTCA, were reported as suspicious.

“Negative information was found regarding the partial owner and co-founder of Intels Nigeria Limited, Atiku Abubakar, having been the subject of investigations for allegations of fraud, corruption, and money laundering between 2000 and 2008,” DBTCA reported on the transactions originating from Intels. “This negative media was reported in prior SARs, and no new negative media was discovered.”

In 2010, the US Senate Permanent Subcommittee on Investigations indicted GTCN, Atiku’s trust corporation, alongside other companies linked to him and his business partner, Gabrielle Volpi.

The committee had investigated how “foreign senior political figures, their relatives, and associates may be circumventing or undermining anti-money laundering (AML) and PEP controls to bring funds that may be the product of foreign corruption into the United States.”

Atiku’s spokesperson, who signed Tuesday’s statement, had declined repeated requests for comments from PREMIUM TIMES and the ICIJ ahead of the publication. The requests were made by phone calls, emails and text message.

In all instances, Mr Ibe was told the investigation was a global collaboration.

Atiku’s response to the report is utterly hilarious and pathetic, the Assistant Head of PREMIUM TIMES’ Business Desk, Oladeinde Olawoyin, said. “The response speaks to the deeply ‘rural’ mindset of those who make far-reaching decisions on our behalf as a collective.

“Reacting to the report that he is under (financial) surveillance in the U.S, Paul Ibe, Atiku’s spokesperson, said due to the recently held Edo governorship election in which Atiku’s party emerged victorious, the timing of the report “should give some thought to thinking people”.

“So, a global investigation would be delayed and deliberately published yesterday to water down Atiku’s party’s victory in an obscure local election? An election that over 90 per cent of journalists working on the project do not even know about?

“To be sure, #FinCEN Files is a new investigation by the International Consortium of Investigative Journalists (ICIJ), BuzzFeed and 108 media partners across the world, including PREMIUM TIMES.
.
“The files are a large volume of confidential financial reports relating to the transaction activities of world leaders, terrorists, drug dealers and money launderers.

“The files include a large number of Suspicious Activity Reports (SARs) filed by banks and other financial institutions to the U.S. Government as required by the Bank Secrecy Act, with the total amount in suspicious transactions reported being $2 trillion ($2,099584,477,415.49).

“The reports were launched yesterday and published simultaneously across global news platforms.”

Atiku, Family Not Under Surveillance, Have Not Breached Any Laws
*These Are Recycled False Allegations

My attention has been drawn to recycled and regurgitated lies about the person of Atiku Abubakar.

For the avoidance of doubt, Atiku Abubakar is not under any US watch list, neither has he been charged, or will ever be charged by the United States Justice Department or any other in a foreign jurisdiction.

It will be recalled that these recycled lies were re-unearthed just before the February 23, 2019 Presidential election, and to put paid to them, His Excellency, Atiku Abubakar, applied for and received a US visa, whereupon he embarked on a visit to the United States on January 17, 2019. He stayed at a hotel just miles to the United States Department of Justice.

Atiku Abubakar in the course of that trip was also received in audience, by officials of the United States Government.

These ‘new’ reports are a desperate gambit to recast these discredited accusations. They are meant to divert the attention of Nigerians from the recent statement by the Secretary of State of the United States, Mr Mike Pompeo, announcing visa and travel bans for certain unnamed but notorious individuals.

Moreover, the timing of this report, less than 24 hours after the Edo state gubernatorial elections, should give some thought to thinking people.

And considering the season that we are in, more of such jaundiced stories seeking to discredit Atiku Abubakar would come. However, it needs to be reiterated that the former Vice President and every member of his family keeps a clean business portfolio that has nothing to do with government resources and in conformity with local and foreign laws of respective countries.