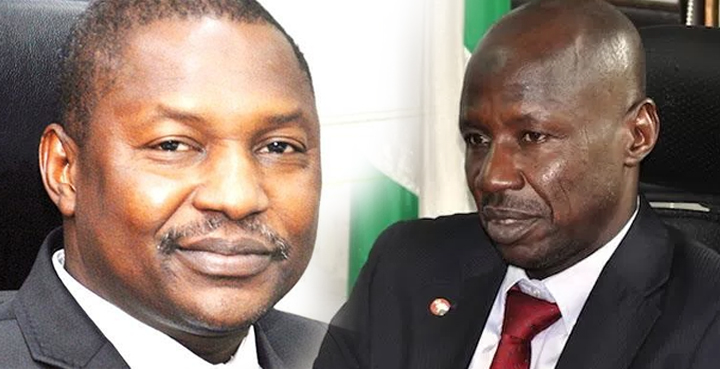 Contrary to the claim of the attorney general of the federation, Abubakar Malami, that the Economic and Financial Crimes Commission (EFCC) is partly to blame for Nigeria’s failure to originally secure a stay of execution of the award of $8.9 billion (about N3.2 trillion) in favour of P&ID, details of Friday’s judgement by a British Commercial Court revealed that the EFCC’s investigation was instrumental to the favourable judgement obtained by the country.

The Commercial Court granted Nigeria’s appeal for a stay of execution of the award of $8.9 billion (about N3.2 trillion) in favour of P&ID, a controversial British firm that secured a gas contract in Nigeria.

On Friday, the Royal Courts of Justice Strand, London, WC2A 2LL presided over by Justice Ross Cranston said following a review of written submissions by the Nigerian government after the arbitral award, which contained “new evidence” concerning the matter in dispute, the court decided to grant “Nigeria’s applications for an extension of time and relief from sanctions.”

The latest ruling is, however, a temporary reprieve for Nigeria, as it merely provides an opportunity for the court to review the new evidence of a miscarriage of justice claimed by the Nigerian government and does not amount to a repeal of the award to Process & Industrial Development Limited (P&ID).

The UK Business & Property Courts (the Commercial Court), presided by Justice Butcher, had approved that P&ID should enforce a March 20, 2013 award against Nigeria by a District Circuit Court in Washington DC.

In a letter to President Muhammadu Buhari, Mr Malami, whose complaint led to the removal of Ibrahim Magu as acting EFCC chairman, accused the suspended anti-graft chief of failing to act timeously on a presidential directive by the Ministry of Justice to commence investigation into the matter.

Mr Malami told President Buhari that in two letters dated June 26 and June 28, 2018 detailing “facts and documents for the investigation” the EFCC was directed to commence investigation into the matter but that the anti-graft commission “did not accord this presidential directive any serious attention until a year after around July/August 2019 when the scale had already tilted dangerously against Nigeria.”

“In view of this delay, the Police were requested to also conduct an independent investigation into the P&ID matter. In the same vein, in December 2019, there was request to the Ag. Chairman of the EFCC to forward copies of all charges, proof of evidence, and judgments in relation to all cases filed by the EFCC against P&ID and their associates, copies of warrants of arrest, copies of other documents in relation to the ongoing investigations. The above documents were required by the Police to enable it to interface with Interpol on this matter.

“The Acting Chairman of EFCC did not respond to my request. The above is just one out of several correspondences which institution has had cause to send to the EFCC and which were neither acknowledged nor replied. Examples of cases where the Acting Chairman either refused to respond to requests from the Office of the Attorney General of the Federation and the Solicitor General of the Federation are attached as (“Annex 3’’).

“In total, it is estimated that the Federal Government of Nigeria lose or would have lost Forty-Seven Billion, thirty-six million, five hundred and twenty eighty thousand, two hundred and nine Naira (N47, 036,528,209.00). In dollars, the estimated amount would be approximately, ($85,008,917.43) Eighty-five million, eight thousand, and nine hundred and seventeen pence and in pounds, it would be Seventy-four thousand Pounds (#74,000.00).

However, contrary to Mr Malami’s claim, the judgement of the court obtained on Friday has revealed that the EFCC under Mr Magu in fact commenced investigation into the matter prior to the presidential directives and also acted swiftly upon receiving the directive.

The judgement revealed that EFCC investigations were instrumental in unearthing the pieces of evidence that convinced the court to make Friday’s judgement that was favourable to Nigeria.

Having received the presidential directive from the Ministry of Justice, the judgement revealed that the EFCC almost immediately swung into action, invited the legal directors of the Ministry of Justice and the Nigerian National Petroleum Corporation (NNPC) for interrogation into what it described as “a conspiracy, abuse of office and misuse of public funds.”

“From late February 2016 until 2 March 2016 these officials were interviewed and they provided the EFCC with documents relating to the GSPA and the arbitration.”

The judgement further showed that the EFCC submitted an interim report on the matter on 16 June 2016, which noted that the process of awarding the GSPA “was significantly hinged on the report of the technical committee of the [Ministry] [and] had the certification and recommendation of the legal unit of the Ministry and that the agreement was signed by the Legal Adviser, Grace Taiga, as a witness to the MOU and the [GSPA]”.

Upon the receipt of the presidential directive, the judgement showed that the EFCC spoke to several sources and profiled about 30 possible suspects.

Less than two months after the commission received the directive from the Ministry of Justice (August 2018), the EFCC sent a request for information to various government agencies and in January 2019, it contacted the Ministry of Lands at Cross River State and the Federal Inland Revenue Service.

After the August 16, 2019 judgement given by Mr Butcher, which granted P&ID the right to enforce the final award judgement, Mr Malami told the British court that the judgement was because the EFCC has “limited remit to financial and related matters.”

But the EFCC was not deterred as it soon obtained critical pieces of evidence that has now proven to be helpful to Friday’s judgement.

“On 28 August 2019 the Federal Inland Revenue Service informed the EFCC that P&ID had not opened a tax file. Early the following month, on 3 September 2019, the Special Control Unit against Money Laundering reported that P&ID Nigeria had failed to register its activities with it.

“In a letter of 4 September, 2019 to the EFCC, the Director of Lands of Cross River State wrote that a letter of allocation was only issued to applicants on payment of all the land charges and fees within the 120 days specified. P&ID could not claim that the land had been allocated to it in 2010, since there was no proof of payment and no-issuance of a Certificate of Occupancy,” the judgement revealed.

“The convictions were on evidence given by an officer of the EFCC,” the judgement stated.

According to the judgement, the EFCC did not stop there. It continued its investigations of persons of interest in the matter and on November 15, 2019 accessed some bank records showing that some former official of the Ministry of Justice, Taofiq Tijani, “received bribes from P&ID in return for overlooking shortcomings in its bid.”

The judgement further stated several revelations about the case that was uncovered by EFCC investigations.

“As explained earlier in the judgment, in a letter to the EFCC on 20 September 2019 General Danjuma’s company, Tita-Kuru, stated, in effect, that P&ID had stolen its plans for a gas stripping plant which it then used to obtain the GSPA.

“Mr Shasore, who conducted the arbitration for Nigeria at the jurisdiction and liability stages, was interviewed on 24 December 2019. He told the EFCC that he made personal gifts of US$100,000 each to Ms Adelore (the senior lawyer at the Ministry) and Mr Oguine (legal director at the NNPC).

“In an interview on 6 and 7, May 2020 Ms Adelore accepted that she received an unsolicited payment of US$100,000 in cash from Mr Shasore, which she had a colleague collect from Mr Shasore’s office. She has told the EFCC that she felt Mr Shasore was working against Nigeria’s interests in the arbitration.”

“During its inquiries, EFCC obtained bank statements and Swift records of interbank payments in relation to various accounts. Among the information obtained from September 2019, and the date EFCC obtained it, is the following (described in greater detail later in the judgment under “Payments/bribes”).

“Dr Ibrahim, a member of the technical committee reviewing the GSPA, opened a US dollar account on 28 April 2008 under the name of his company, Equatorial Petroleum Coastal & Process Limited, with an initial cash deposit of US$10,000. There were further periodic cash deposits totalling US$69,300 until 2015. On 28 October and 1 December 2008 there were also two cash deposits totalling NGN 4,000,000 (approximately £8,500) into his personal account at Firstbank.

“In March this year Nigeria applied to the US District Court for the Southern District of New York under 28 USC [United States Code] § 1782(a) to obtain discovery of bank accounts at ten different banks. P&ID intervened in the course of the application. It stated that it did not object to the order although its submission to Judge Schofield was that the use of the information obtained should be limited to criminal prosecutions in Nigeria.

“The US court made disclosure orders on 7 May 2020. As a result of the application, Nigeria obtained information, including payments to Ms Taiga’s daughter in 2009 and 2012,” the judge said.