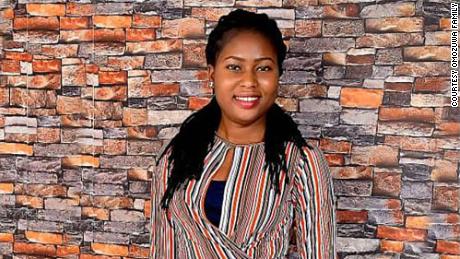 Three months after the brutal rape and murder of Vera Omozuwa, a 100-level student of the University of Benin, the Edo State Police Command on Wednesday paraded six suspects in connection with the crime.

PREMIUM TIMES reported how the victim, Vera Omozuwa, a 100-level Microbiology student of UNIBEN, was beaten inside a hall in the Redeemed Christian Church of God, Ikpoba Hill, Benin City on May 13, where she went to study.

She died on May 31, 18 days after, at the University of Benin Teaching Hospital.

Mr Kokumo said the police decided to intensify efforts in unravelling those behind the death of the student following public outcry and “the interest by the Inspector-General of Police in the matter”.

He said, “the matter was a great concern to the Inspector General of Police, IGP, Muhammed Adamu who sent to us here in Benin, homicide experts to work with our policemen at the state criminal investigation department.

“What we are seeing today, is a result of the uniting efforts of the police to get at the root of the crime, and today, I announce to you and making public through this medium that the perpetrators have been arrested.”

“The post-mortem results had confirmed that she was raped,” he said.

He said he had earlier told the people of the state and Nigeria at large that the police would do all in their powers to unmask those behind her death.

“I assured the good people of Edo State that we will leave no stone unturned to unravel the mystery behind this,” he said.

He said they (suspects) had made ‘confessional statements’.