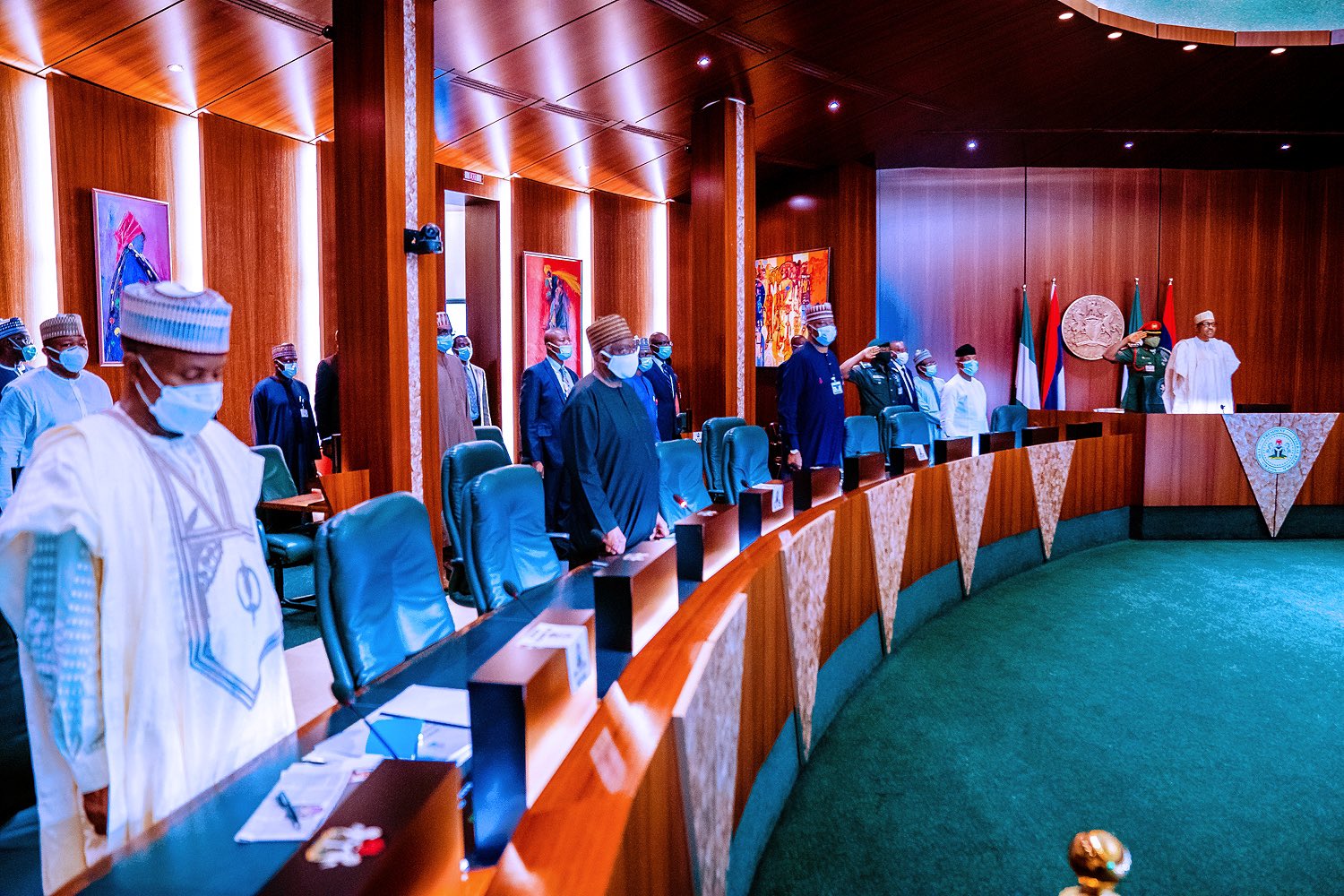 President Muhammadu Buhari this afternoon, met with governors of the Northeastern states on security and development at the State House. VP, SGF, CoS, NSA, HMoD, Service Chiefs and other heads of security agencies were in attendance. [PHOTO CREDIT: @BashirAhmaad]

President Muhammadu Buhari met on Monday with North-East governors and security chiefs over the growing insecurity in the region.

The meeting at the State House, Abuja, was also attended by Vice President Yemi Osinbajo, Secretary to the Government of the Federation, Boss Mustapha, National Security Adviser, Babagana Monguno, and the president’s Chief of Staff, Ibrahim Gambari.

All governors of the region: Babagana Zulum of Borno; Ahmadu Fintiri of Adamawa; Bala Mohammed of Bauchi; Inuwa Yahaya of Gombe, Darius Ishaku of Taraba and Mala Buni of Yobe were in attendance.

Mr Zulum spoke to journalists after the meeting, and gave a highlight of what they discussed. He was accompanied by Mr Fintiri.

Mr Zulum: Arising from the North-East governors’ forum meeting held in Maiduguri on Saturday, we met the president with a view to highlighting the key challenges in the region, especially issues of security, decaying infrastructure especially rock projects. Cases of oil exploration in the region, issues of enhancing river basin development in the region among others. That is the main reason why we met Mr President.

One of the root causes is that of access to farmlands, people need to go back to their farmlands, people need to be resettled in their original homes so that they can restart their means of livelihood. This is one of the reasons the insurgents are recruiting more into the sect and therefore creating an enabling environment will enable the people to go about their normal duties will no doubt reduce the cases of insurgency.

We also recommended that police should be empowered, to be provided with certain state of the art equipment, armoured personnel carrier and so on with a view to bridging the manpower gap that we are having in the Nigerian military.

Your reaction to the recent attack on you has been described as an act of ingratitude, how do you react? Also, there are suggestions that the military was not committed to solving the Boko Haram problem in Borno and the North-East, that they are in fact engaging in a thriving business and as such do not want the insurgency to end. Can you clarify this?

We have had a series of consultations after the attack and I think security is not only about the federal government; there is a need for the federal, states, and the local government to come together with a view to proferring solutions that will end this crisis in the region.

But most importantly, there is war in the region and I think that is why we are here. So I think the government is taking a bold step with a view to ensuring speedy resolution of some of the gray areas that we have in the region.