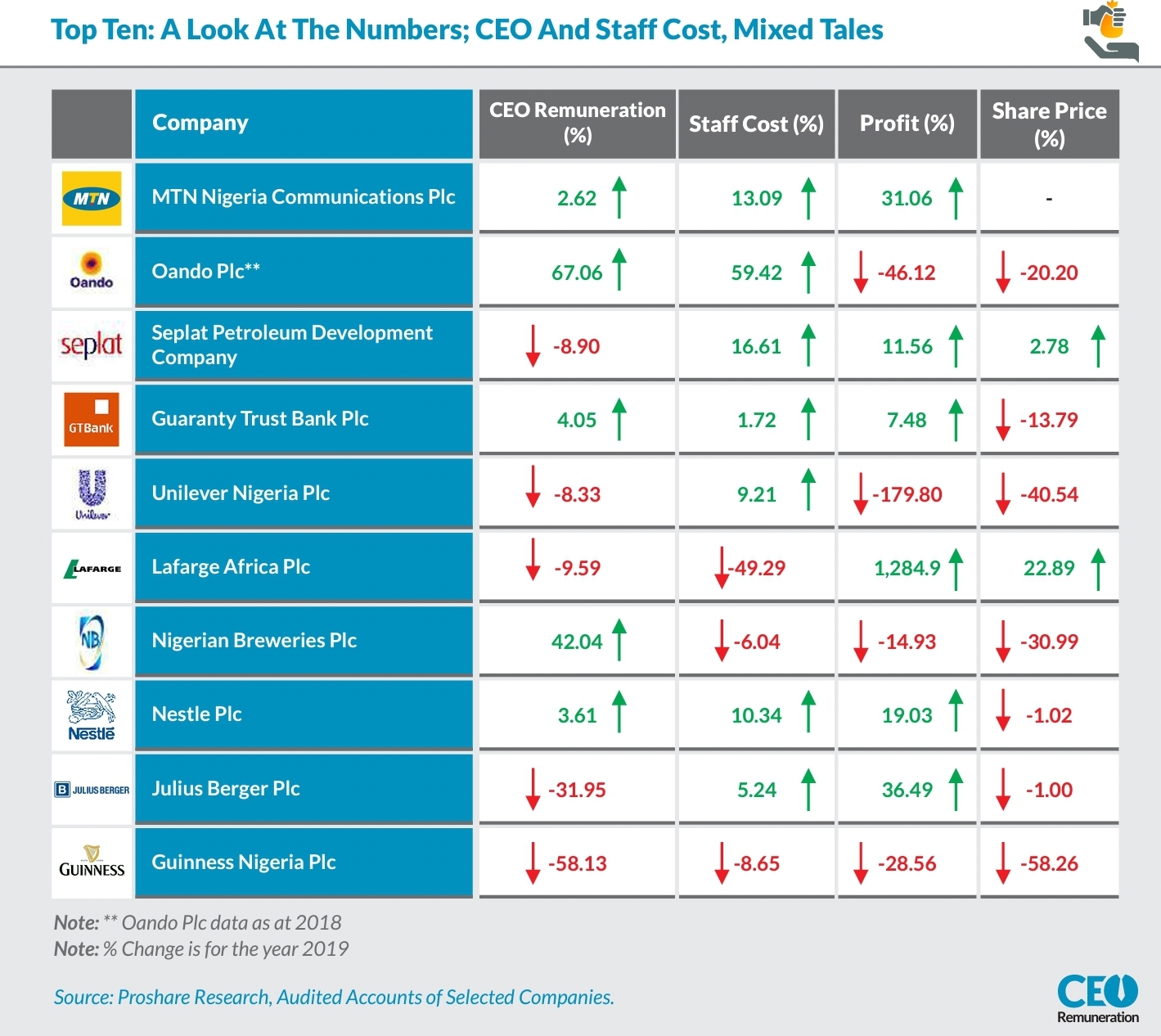 About half of the highest-paid CEO's made less financial returns

In only about half of Nigerian top firms did the earnings of chief executive officers (CEOs) reflect the companies’ financial performances in 2019, a report published last month found.

The report, titled “CEO Remuneration: Paying the CEO in a Pandemic, The Unanswered Questions,” was published in July by Proshare, an online research hub founded in 2006.

Some corporate analysts have often questioned the growing size of the pay of chief executive officers (CEO) of organisations whose revenue performance is slow.

The concerns are expected to grow after the Proshare report showed that, in the 2019 financial year, only a few companies’ heads were able to reflect their increased pay in their companies’ corporate and annual earnings.

As the report put it, the executives’ earnings and the companies’ revenues were “mildly correlated.”

“The outcome of the analysis of executive pay and performance in the report hinted at only a mild statistical correlation of 0.49,” the report wrote.

This means only about half of top CEO pay in Nigeria could be explained by their company’s financial performance, the rest was subject to more unclear factors, the report wrote.

For instance, as noted by the report, in Lafarge Africa, the CEO’s pay grew despite the company writing consecutive losses for three years. Michel Puchercos had a pay rise of +30 per cent between 2016 and 2018 and between 2017 and 2018 his pay went up by +21.2 per cent.

In another instance, this time, the growth in the CEO’s take home far outstripped the growth of the company’s staff cost. This is the case of Guinness Guinness and its CEO, Baker Magunda.

But Mr Magunda assumed office in 2019. Therefore, most of the previous pay rise was earned by Peter Ndegwa who for three-years headed the Nigerian operations of the company.

The earnings of some of top earners reflected in the performance of their company’s financial standing, but it is the other way round for others.

CEO’s of companies like MTN, GTBank, Nestlé fall into the former category while those of Lafrage, Gunines, Union Bank among others recorded undulating successes in terms of their companies’ profitability.

In 2019, MTN’s staff cost rose from ₦27.15 billion in 2018 to ₦30.71 billion. “The increase suggests either a rise in the number of staff employed or existing staff salaries have been raised,” the report wrote, adding, “Either way, this implies that MTN is investing in its human capital.”

In terms of sectors, the report explained that the pay of corporate chief executives in the banking sector for one “appeared tied to the size of gross earnings, and, to a lesser extent, the underlying profitability of their operations.”

In the sector, the trio of Segun Agbaje of GTBank with ₦399.7 million, Emeka Emuwa of Union Bank with ₦172 million, and Yinka Sanni of Stanbic IBTC with ₦155 million were paid the highest remuneration in 2019.

In comparison with previous years though, the executives paycheck for the year did not closely match the profit generated in 2019, save GTBank which recorded the second-highest profit before tax of ₦243 billion and paid its director the highest remuneration in the sector.

On the flipside, the report wrote, Stanbic IBTC and Union Banks which reported relatively lower profit before tax of ₦90.93 billion and ₦24.84 billion respectively in 2019 climbed up the ladder of the highest-paid executives in the sector.

Moving on, described as “a better rewarding sector,” the oil and gas sector has Oando’s Adewale Tinubu with ₦568 million (2018 earning because the company’s 2019 financial audit has not been published when this report was written), Seplat Petroleum’s Ojunekwu Avuru with ₦440 million, and Total’s Imrane Barry with ₦163.42 million lined as its top earners.

The chart of ICT sector top earners was led MTN’s Ferdinand Moolman with ₦585.94 million. He was trailed in far second place by James Agada of Computer Warehouse Group (CWG) Plc who earned ₦47.2 million in 2019.

As for conglomerates, with ₦127.6m, the UACN CEO, Abdul Bello, earned the highest among the listed conglomerates on Nigeria Stock Exchange. He was followed by Transnational Corporation of Nigeria’s Adim Jibunoh who lost his top spot because his 2018 eaning of ₦100.21m remained unchanged in 2019.

Guinness’ Baker Magunda led the pack in the consumer goods sector with his ₦461 million remuneration in 2018. But Yaw Nsarkoh of Unilever leapfrogged him in 2019 by earning ₦302.52 million. Mr Magunda’s earning nosedived in 2019 to ₦193 million, placing fourth in the sector.

Jordi Bel of the Nigerian Breweries placed second on the log. His earnings rose significantly from ₦190 million in 2018 to ₦271 million in 2019. Maurico Alarcon of Nestle ranked third with ₦218.08 million, a slight increase from the ₦210 million he earned2in 2018.

With an annual pay of ₦217.07 million in 2019, Julius Berger’s Lars Richter was the highest-paid CEO in the construction and real estate sector. Representing a massive Aiyesimoju earned +1,006.37 per cent difference, in second place is Folasope Aiyesimoju of UAC Property Development who received an annual remuneration of ₦19.62 million.

This, the report said, “reflects the large disparity in earnings in the construction/real estate business.”

“A few equally larger construction firms are not listed on the NSE, and do not make a representation of their executive remuneration,” the report added. “It would be reasonable to assume that the gap between the executive pay of firms in the sector would be narrower if the executive compensation data for (the) none-quoted companies were made available.”

Tagged as the sector whose CEO’s received the lowest annual remuneration in 2019, the highest-paid CEO in the agricultural sector was Graham Hefer of Okomu Oil Palm who earned 11.55 million in 2019. He toppled Livestock Feeds’ Solomon Aigbavboa who resigned in July 2019.