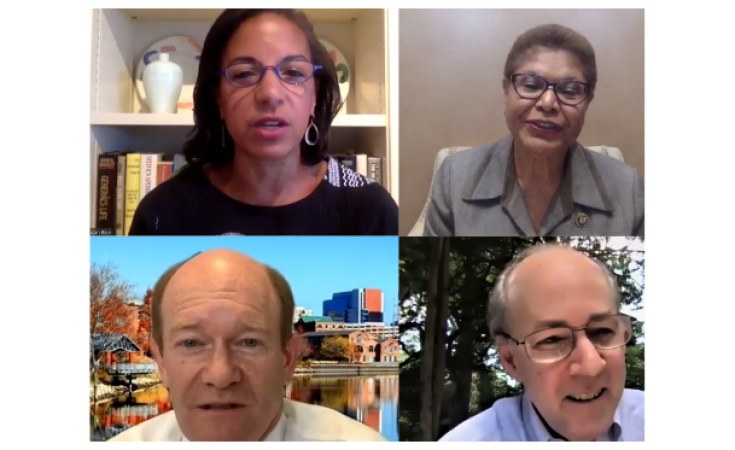 Africa: What Would a President Biden Do About Africa?

Washington, DC — Repairing U.S. relations with key African countries must be a priority for the next administration, if Joseph Biden wins the November election, senior Democrats said during an online fundraiser last week.

Speakers representing the campaign included two women under consideration by Biden as his vice-presidential nominee – national security and international diplomacy expert Susan Rice and House of Representatives member Karen Bass, who has focused on Africa policy in the U.S. Congress.

The fundraiser – one of a series organized as part of pandemic-time electioneering – is believed to be the first Africa-focused event held by any presidential campaign.

“This administration has done so much damage in so little time,” Rice told participants, speaking not only of American ties with Africa but also about broader global relationships. “We need to recognize that we have a stake in Africa’s success”, she said.

Bass, current chair of the Congressional Black Caucus, who has represented the Los Angeles area since 2011, characterized current U.S. Africa policy as “incoherent.” She was in Khartoum with a Congressional delegation in January, working to support Sudan’s transition to democracy, when the administration’s travel ban on Sudan was announced. “It was the wrong message,” she said.

Mentioning the widely reported Trump reference in 2018 to African “shithole countries,” Bass said restoration of Africa’s trust is essential. “We have a lot of clean-up to do.” She said building relations and repairing America’s reputation starts with demonstrating commitment to the rule of law and to fighting corruption.

The hour-long session on July 28 was moderated by Brian McKeon, a longtime Biden adviser who, during the Obama administration, held posts at the Pentagon and the National Security Council and served as the Vice President’s deputy national security adviser. In his first question to Rice, McKeon asked how to restore Africa ties that have been “significantly and substantially damaged by what President Trump has done.”

Rice, who served as UN ambassador and national security advisor under President Obama, called for “engaging with Africa in a respectful way” – on issues ranging from innovation to immigration, education, investment and infrastructure. “We have to be in Africa because we understand that it matters to us,” she said.

The fundraiser was spearheaded by volunteers active in the campaign’s Africa policy group, part of what Foreign Policy dubs “a sprawling structure that includes some 2,000 people and 20 working groups.”

Ambassador Michael Battle – one of the co-leads for the Africa group – said the event raised more the four times the fundraising target. “Our goal was $50,000,” he said in a Tweet, [but] we exceeded the goal raising $202,600.” Instead of the 300 persons expected at the fundraiser, 598 took part. The call drew participants from 39 states and 14 countries, organizers said, and included a number of retired U.S. diplomats and a broad-range of other Africa-interested individuals.

The fundraiser idea was hatched during a telephone conversation several months ago that included Rice, Johnnie Carson, senior advisor at the U.S. Institute of Peace, and Witney Schneidman, senior advisor for Africa at the law firm Covington & Burling LLP. Carson, who was Assistant Secretary of State for Africa during the first Obama term after serving as ambassador to three African countries, was Rice’s principal deputy when she was assistant secretary for Africa under President Clinton. Schneidman served as a deputy assistant secretary in the Africa Bureau at the same time.

As Obama’s national security advisor, Rice was instrumental in organizing the 2014 U.S.-Africa Leaders Summit that brought 50 African presidents and senior officials to Washington for three days of meetings. A similar top-level initiative will be part of the outreach to Africa that Biden will undertake, according to Senator Chris Coons, who represents Delaware and was the third speaker on the Africa fundraiser call.

“There will be regular travel by the President and senior administration officials to the continent,” he said, as well as a push to send “appropriately skilled” ambassadors to embassies across Africa. Coons, who serves on the Foreign Relations Committee and formerly chaired the Africa Subcommittee, said the new administration will need to demonstrate respect for Africa – and for “our own African diaspora and its strengths and talents.”

One way to do this, he said, is to support “high-quality, high-standard development projects” working through the recently established Development Finance Corporation (DFC), a consolidated agency launched with bipartisan support in 2018 to partner with private investors on development projects in Africa and other regions.

All the fundraiser speakers stressed the importance of youth-focused initiatives. On a continent of 1.3 billion people, where the median age is 19, Rice said demographics represent both a huge opportunity and a major test.

Coons said the Young African Leaders Initiative (Yali), launched by Obama in 2010, should be expanded. The 10 classes of Yali fellows from across the continent are a “remarkable force for good,” and promoting networking among these alums can benefit both Africa and the United States, he said.

Africa is rarely mentioned in U.S. presidential campaigning, and that has been true in 2020. Biden’s online foreign policy statement makes passing reference to Africa. His most substantive on-the-record statement was a response to a questionnaire submitted to all Democratic Party contenders a year ago by the Council on Foreign Relations. The only Africa question posed by the Council asked how the United States should “adjust our policies” in response to Africa’s projected population growth.

“The United States cannot afford to miss this moment to engage with African youth and to offer them a window into the American model of democracy,” Biden said in his response. Working with African partners, he said, the United States should prioritize economic growth by strengthening trading relationships; empower African women because we know that educated and empowered women are key to development; start an urbanization initiative, including partnerships with U.S. cities, to help African cities plan for their growth; and demonstrate the American model of democracy and economic development.

Along with Battle, Biden’s Africa policy working group is led by Nicole Wilett and Allison Lombardo, with Coon’s senior policy aide Thomas Mancinelli playing a key role. Wilett, chief of staff at the Open Society Foundations, worked previously at the Bill and Melinda Gates Foundation and the Albright Stonebridge Group and served on the Senate Foreign Relations Committee staff and at the White House, twice as NSC director for African affairs during the Obama Administration. Lombardo’s experience includes a stint as NSC Africa director, working on the Yali initiative and on South Sudan, and senior posts at the State Department and USAID.

Biden’s choice of advisers has drawn criticism from some quarters. Huffington Post this week reported a letter from more than 275 Democratic Convention delegates — most of whom had pledged to support Sen. Bernie Sanders – criticizing Biden’s foreign policy aides, including Rice and chief adviser Antony Blinken, who served as both deputy secretary of State and deputy national security advisor during the Obama presidency. Also named in the complaint is Avril Haines, a former CIA deputy director, who is heading foreign policy on the transition team and has been criticized for her role overseeing redactions in the Senate Intelligence Committee report on CIA torture.

Howard W. French a veteran foreign correspondent who reported for more than a decade from Central America, Africa and Asia for the New York Times, fears that Biden will “return to the traditions of American foreign policy,” which include placing Africa “lowest on the totem pole.” In his latest World Politics Review column, French asks whether Biden’s team is “up to reinventing relations with regions that Washington is used to ignoring, or will they still treat them as second-tier interests?”

During the fundraising call, Coons spoke of the need to restore the bipartisan cooperation that has often coalesced around support for such issues as public health, childhood development and good governance. Democrats and Republicans have backed major Africa initiatives by presidents from both parties – including the African Growth and Opportunity Act, the President’s Emergency Plan For AIDS Relief, the President’s Malaria Initiative, Power Africa and Yali. But a playbook from the past seems unlikely to guide policy in a time of polarization and pandemic.

The fundraiser lends credence to the view – expressed by Riva Levinson in her column last month for The Hill – that Africa is on the political agenda in 2020. On the Trump side, she points to the Development Finance Corporation announcement last month of expanded engagement on the continent, including deployment of investment advisors in Africa. If the trend towards greater Africa interest persists, she says, there is hope for more vigorous and comprehensive U.S. support for Africa’s response to the coronavirus crisis.

Trump Africa policy to date has been largely driven by U.S.-China rivalry. Perhaps as a counter to China’s aggressive outreach across the continent, DFC CEO Adam Boehler floated plans for an investment summit in Washington next month attended by African heads of state, “if it can be done safely” – which seems unlikely. Boehler also chairs Prosper Africa, the cornerstone of the administration’s Africa policy aimed at boosting American two-way trade and investment with the continent.

On the fundraising call, Rice warned against “putting everything in a U.S.-China competition frame,” saying what is needed is competition where required and cooperation “where possible.”

“A new U.S. policy must see Africa’s progress and setbacks in a global context, tearing down Washington’s siloed approach to the region, writes Judd Devermont, director of the Africa Program at the Center for Strategic and International Studies and former U.S. government intelligence analyst, in a policy brief published today. “It is time to marshal new arguments about Africa’s significance, refresh tired U.S. programmatic and diplomatic gambits, and focus on the global implications of U.S. engagement in Africa.”

If Biden wins in November, the Africa-interested community in the United States and internationally will be watching to see how much attention Africa will receive amid many competing issues. Among the most critical questions is whether a more cooperative relationship will be forged with the countries of the world’s second largest continent, where Covid-19 poses major challenges and could benefit from a robust U.S.-Africa partnership, particularly in coordination with the World Health Organization, which is coordinating the global response.

For the first time is 25 years, Africa is headed into recession, the World Bank reports. The poverty rate for Sub Sahara Africa is projected to rise by over two percent in 2020, increasing the number of people living below the poverty line by 13 million – with many more millions to follow as the Covid-19 crisis expands. Knock-on effects from the pandemic include a doubling of malaria rates, as the SarsCoV2 interrupts malaria prevention and treatment efforts.

Nobel Prize-winning former Liberian President Ellen Johnson Sirleaf is co-chairing with former New Zealand Prime Minister Helen Clark an independent panel to evaluate the world’s response to the Covid-19 pandemic. When asked what the United States can most effectively do to help Africa survive the economic crisis the World Bank and other international financial institutions predict, Johnson Sirleaf, a former investment banker, has a consistent answer – “invest, invest, invest”.

Although the pandemic in Africa did not feature prominently in the Biden fundraiser, that appeal to invest in Africa may resonate with the candidate and his Africa team.