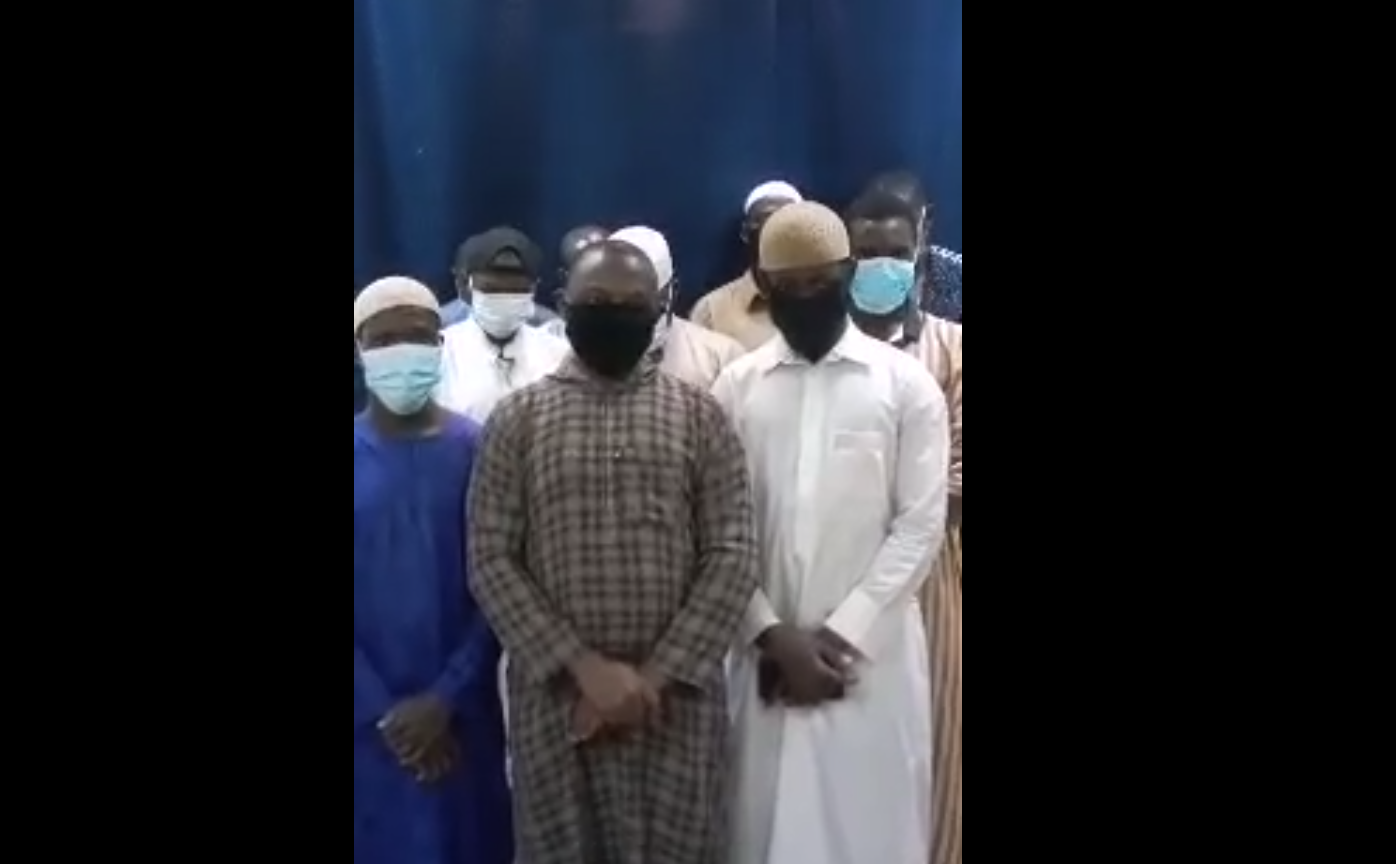 Some Nigerian students, who are stranded in Saudi Arabia due to the restriction of movements caused by coronavirus, have accused officials of Nigeria’s embassy and consulate office in the country of thwarting their evacuation plans.

But the embassy has described the allegation as false, and challenged the students to produce evidence to back their claims.

In a four-minute video, which has since gone viral on social media, the yet-to-be-identified students said rather than facilitating their trips back home as scheduled by a Saudi airline known as Saudia, the officials had allegedly demanded “huge amount of money or 80 free seats from the airline as bribe before they can allow the airline to airlift us to Nigeria.”

According to their narration, they represent more than 300 Nigerian students on Saudi scholarships to study different programmes in various universities in the country. Apart from free tuition, they added that the universities also offered them free accommodation, feeding allowance, free return tickets on Saudia, among others.

The spokesperson for the group, who failed to identify himself before delivering his address in the video, specifically mentioned Nigeria’s ambassador to Saudi Arabia, Isa Dodo, a retired justice, and his deputy, Sa’heedu Tiggi. PREMIUM TIMES is aware Mr Tigi now acts as the ambassador since the return of Mr Dodo to Nigeria about a month ago.

The group’s spokesperson said out of about 150 countries whose citizens are studying in Saudi Arabia on the Kingdom’s scholarship, only Nigerian students are yet to be evacuated from the country.

He said; “Out of more than 150 countries that have their citizens studying in Saudi Arabia, students from about 148 countries have travelled home for their holiday between May 15 and July 30, with the assistance of their embassy and the good leaders of their countries.

“But after a series of meetings with the ambassador, consular general and Saudia officials, we discovered that Saudi airline has prepared more than six trips for us to travel home for holiday which were blocked by our embassy and consulate here in Saudi Arabia. Saudi airline has sent about eight letters to our embassy and consulate requesting for landing permits to airlift us to our country but none of the letters was responded (replied) due to their self-interest.”

Some other affected students, who also spoke to PREMIUM TIMES on condition of anonymity, alleged that the officials focused on securing commercial flights for evacuation and encouraged them to pay “rather than providing the necessary documents to the Saudia that will airlift us free of charges.”

“Our schools insisted that Saudi Arabia’s policy forbids them to book tickets with any other airline aside from Saudia since it is the government that is funding our trips. But since our embassy failed to act, a few of us who could afford the almost N300,000 charged by the Azman airline introduced by the embassy, left with the airline in July,” another student, who arrived in the country via Benin Republic on Sunday, told our reporter.

In a lengthy telephone interview, the ambassador said those who spoke in the video are ignorant of his efforts to ensure the safe evacuation of all Nigerians stranded in the Kingdom since the outbreak of the coronavirus disease.

According to Mr Dodo, the embassy received no communication from any Saudi authority on the case of the students. He said many letters written by the embassy to Saudia were not replied.

The ambassador, who made available copies of letters addressed to the airline by the embassy, said at no point did the airline reply to the letters.

It was, however, not clear if the airline received the letters as there are no signs indicating acknowledgements in the copies provided by the ambassador.

But Mr Dodo said the embassy is committed to the welfare of Nigerians in Saudi Arabia and that the case of the students could not be different.

“Our students are our children and their pain is our pain. I want to believe those in the video were not properly briefed by their leaders who have been involved in the evacuation processes all along. But we are not bothered because we fear God Almighty, and we have been serving our fatherland with the fear of God,” the ambassador told our reporter on the phone.

Some of the letters written by the embassy to the Kingdom’s foreign affairs ministry, copies of which were made available to PREMIUM TIMES, and dated June 7 and 14, and July 12, informed the ministry of its ‘no objection’ stance on the planned evacuation of students back to Nigeria by various authorities.

The Saudi ministry replied to one of these letters on June 21, noting that its education ministry had been notified of the development.

Meanwhile, on July 16, the embassy in a letter signed on behalf of the ambassador by his deputy, Sa’heedu Tiggi, demanded the airline to choose three days from which the embassy could pick one for the students’ evacuation.

This was followed up by another letter dated July 27 which contained a list of protocols to be fulfilled by the airline before the landing permit can be obtained.

In a letter of disclaimer made available to our reporter by the ambassador and addressed to the embassy by the Nigerian students’ union of the Islamic University branch, Al-Madinah, the union said it was not involved in the activities of those it described as “the kangaroo group of people that paraded themselves as the national union of Nigerian students in Saudi Arabia, and the stories that emanated from that group and other stories which were aired on BBC Hausa, PREMIUM TIMES, NTA news and other social media which some students expressed their displeasure towards the Nigerian embassy in Riyadh and Nigerian consulate in Jeddah.”

The letter, which was dated August 2, and signed by the branch president, Kabeer Adegbeye, described as callous the decision to make “those unguarded statements against our honourable embassy and consulate.”

But a student at another university described the disclaimer as sponsored, saying “how can a single branch of a union with branches across many universities condemn an action backed by many other branches?”

On July 29, Saudia management announced on its website that it cancelled its flights earlier scheduled to land on August 1 and 3 at the Nnamdi Azikiwe International Airport in Abuja. Some of the stranded students said they had hoped they would be conveyed home by the flights on the appointed dates. Their hope was hinged on the perceived improved communications among the concerned officials at both the airline and the Nigerian embassy in Riyadh and its consulate office in Jeddah.

Some of the students later said they were told by the airline that Nigerian officials frustrated the flight.

“We were shocked when we were told that there has been no response from Nigeria to Saudia’s enquiries. In fact, the official told us each time a trip is cancelled, as much as $38,000 is lost, and they have cancelled flight for more than six times,” another stranded student, who does not want to be named, told our reporter.

Our reporter could not get the reaction of the airline management. An official of the airline who was reportedly in charge of the flight schedule, and who was identified as Musad Musad, was inaudible during telephone conversations with our reporter.

Mr Musad, however, agreed that a message should be sent to him via WhatsApp. But while his line could not be found on WhatsApp, messages sent as SMS and e-mail forwarded to him were yet to be replied as of the time of filing this report.

Meanwhile, the Comptroller-General of the Nigeria Immigration Service (NIS), Muhammad Babandede, has intervened in the matter and promised that appropriate authorities would act urgently.

Mr Babandede, who engaged the permanent secretary, Ministry of Foreign Affairs, Mustapha Lawal, on the matter, said all hands were on deck to ensure that the interests of Nigerians are protected anywhere they find themselves.

“We must understand that this is an unusual time. At a time of an emergency like this we cannot expect perfection. But I am sure the embassy must have done its best in handling this case. While we should be concerned about results, let’s put into consideration the plight of officials handling various cases. This will be resolved soon, as well,” Mr Babandede told our reporter on the phone.

In a follow-up interview with the permanent secretary, he assured of the government’s commitment to addressing the challenges faced by Nigerians because of coronavirus disease.

Mr Lawal, however, explained that the protocols to be observed are cumbersome, and that concerned individuals should understand these challenges.

He said, “There are protocols for evacuation and we must understand that the approval for evacuation is done based on available facilities, so that we do not compound the crisis at home too. These are very important steps towards successful evacuation. But we are currently working hard on evacuation of these students and others elsewhere.”