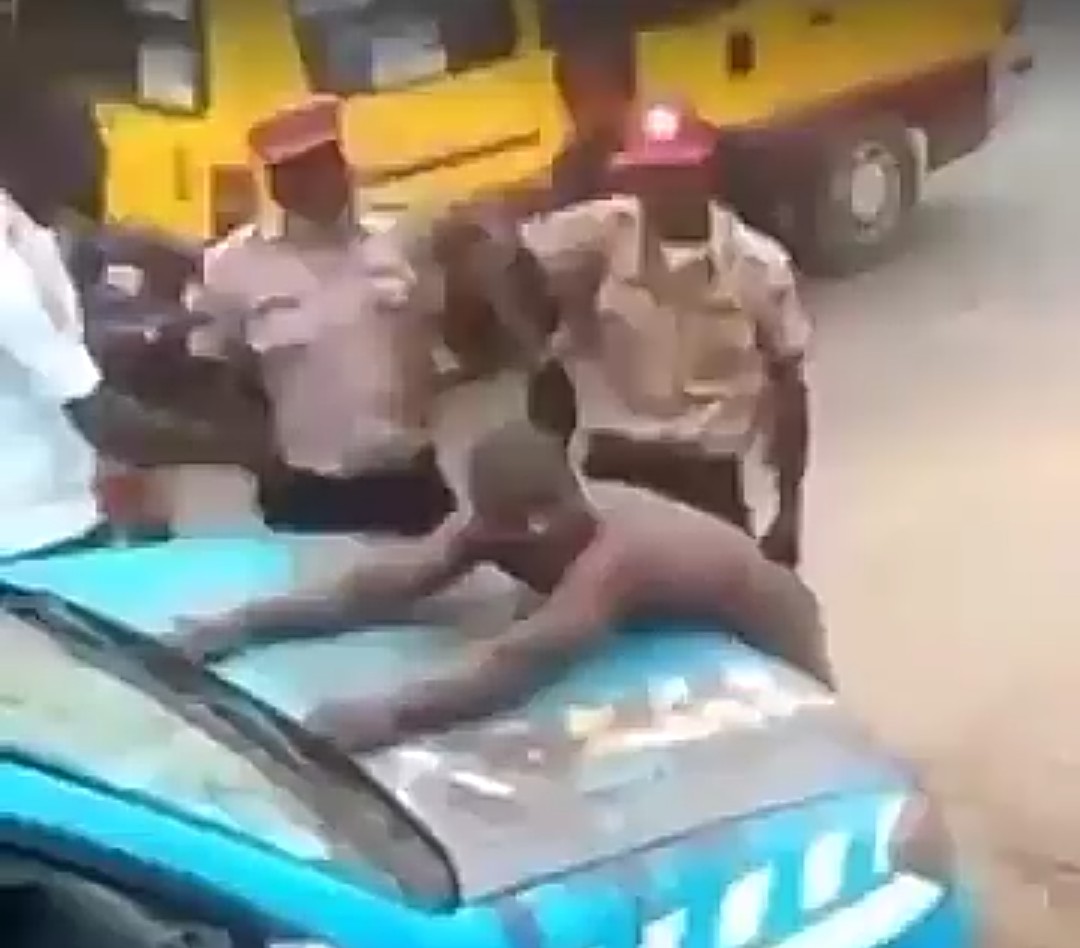 Incident scene of the angry man scantily dressed, standing on the bonnet of the FRSC’s patrol vehicle.

The Federal Road Safety Corps (FRSC) has charged the tricycle rider who fought some of its operatives to court. The agency also demoted its officials involved in the public brawl.

In a video clip seen by PREMIUM TIMES in July, the man, angered and scantily dressed, stood on the bonnet of the FRSC’s patrol vehicle, assaulting one of the officers in the process. He undressed himself and tore the officer’s uniform. The incident happened in Benin, Edo State.

In retaliation, some of the operatives ganged up against the man and rained slaps and beatings on him.

The unclad rider, who was reportedly arrested for driving against traffic, also destroyed the agency’s patrol vehicle.

In a statement on Sunday, Bisi Kazeem, the agency’s spokesperson, said while the prosecution of the tricycle rider has commenced, the officers involved have been recommended for demotion.

“While the disciplinary panel constituted at the instance of the Corps Marshal that conducted the investigation into the incident recommended that the 7-man patrol team involved in the incident be sanctioned with the award of loss of seniority and reduction in rank.

According to Mr Kazeem, the case against the erring driver was filed on July 22 before Magistrate Ojehumen at the Evbuoriaria Magistrate Court 8, Sapele road, Benin.

“During the proceedings, the defendant pleaded not guilty to a 2 count charge bordering on breach of public peace and malicious damage of FRSC Patrol Vehicle.

“The Counsel to the defendant eventually applied for bail which was granted by the Court, and the case was adjourned to 5 August, 2020 for further hearing.”

“The Corps Marshal has further directed the redeployment of the affected FRSC staff from their present Command in addition to the reduction in rank that was awarded by the Disciplinary Panel against the affected personnel having been investigated and found liable of patrol misconduct, in civility, unprofessional and unethical behaviour towards a road traffic offender; acts that contradict the patrol operational ethics of the Corps.”

Mr Kazeem, however, said it will not relent in prosecuting any member of the public who molests its officers or damages its properties.