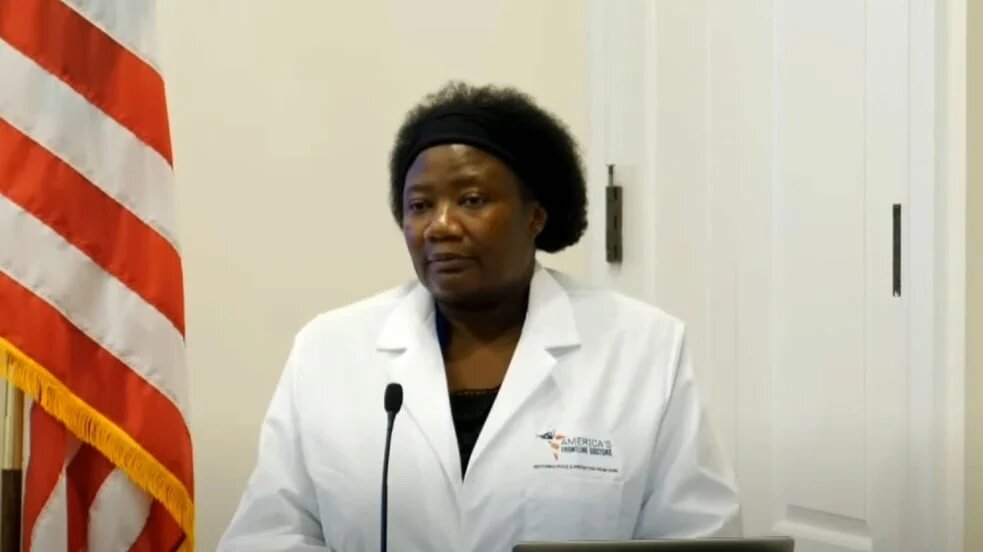 The guild of medical directors, a group of private hospital owners in Nigeria, said the claim by a Nigerian-born U.S. doctor, Stella Immanuel, that COVID-19 has a cure is unproven.

Ms Immanuel, a pediatrician in Texas, United States, in a viral video claimed the combination of hydroxychloroquine, zinc, and the antibiotic Zithromax was a “cure” for the COVID-19 and that “you don’t need to wear a mask.”

Flanked in front of the U.S. Supreme Court by seven other doctors, all wearing white lab coats crested with “America’s Frontline Doctors,” Ms Immanuel, who schooled in Nigeria, said she had treated over 350 patients with the drugs “and all survived”.

“This virus has a cure, it’s called hydroxychloroquine, zinc, and zithromax. You don’t need masks, there is a cure,” the pediatrician said.

But the guild said in a statement signed by its president on Tuesday, Olufemi Babalola, a professor of ophthalmology, that the claims are unsubstantiated and has no scientific evidence.

“There is no scientific evidence to prove the claim, adding that, her saying the said drugs are certified for treating COVID-19 “is her own personal, unsubstantiated claim.”

“The important point of course, is to note that medical research has subjected HCQ to intense research. While some studies suggest that it is effective, others have come to the opposite conclusion. It is also true that Senegal, where HCQ is routinely used, has one of the lowest COVID-19 case fatality rates in the world at 0.64% compared to 3.4% in the USA.

“As we speak, a study is underway in LUTH on its efficacy and safety. Subsequently, a meta-analysis of all these studies should be undertaken to pool all the results and come up with a summative analysis which will guide clinicians.

“Until then, all anecdotal claims such as the one from Dr Stella Immanuel must be taken with a pinch of salt. It should also be noted that HCQ may be a cause of serious complications and even death in some people,” the guild’s statement read.

Ms Immanuel’s claim is also at odds with the recommendation by Nigeria’s disease control agency, NCDC, which has said hydroxychloroquine is administered to COVID-19 patients on case-by-case basis and its potency varies from person to person.

It also does not correspond with the stance if the United States’ Food and Drug Administration (FDA) which said that hydroxychloroquine is “unlikely to produce an antiviral effect.”

Her claim is likewise at dissonance with the World Health Organisation, WHO, as it did the US Centre for Disease Control and Prevention (CDC), which recommends wearing masks to stop the spread of the virus.

Ms Immanuel’s speech has since Monday gained traction on social media, becoming one of the top-performing posts on Twitter with more than 14 million views.

The video was first published by Breitbart News, a right-wing medium co-founded by Steve Bannon, a former aide to American President, Donald Trump.

Mr Trump, too, has been an ardent promoter of hydroxychloroquine as COVID-19 cure theory, much to the consternation of medical experts.

The video’s ‘virality’ was largely aided by Mr Trump who shared it, with a caption a “must watch,” on Twitter on Tuesday with his over 80 million followers.

But Twitter said it deleted the various versions of the video shared late Monday night by Mr Trump and Breitbart News, having pulled thousands of views and shares.

Meanwhile, according to Crowdtangle, a data-analytics firm owned by Facebook, the video had been shared nearly 600,000 times. But the microblogging site said it had also pulled down the video.

“We’ve removed this video for sharing false information about cures and treatments for COVID-19,” a Facebook spokesperson told CNN, adding that the platform is “showing messages in News Feed to people who have reacted to, commented on or shared harmful COVID-19-related misinformation that we have removed, connecting them to myths debunked by the WHO.”

Also, having beeb viewed more than 40,000 times on video streaming site, YouTube, users attempting to access the video on the site are told the video had been removed for “violating YouTube’s Community Guidelines.”

According to the Daily Beast, Ms Immanuel has a history of strange medical claims.

For instance, she was reported to have said that fibroids and cysts are caused by having sex with demons in dreams and that alien DNA is being used in medical treatments.

Also, records from the Texas Medical Board also show that Ms Immanuel’s clinic has the same address as the church she founded, Firepower Ministries.

Her sermons, which are hosted on her YouTube channel, include messages of support for President Trump.

142 people killed, 44 kidnapped in Northern Nigeria in one week – Report