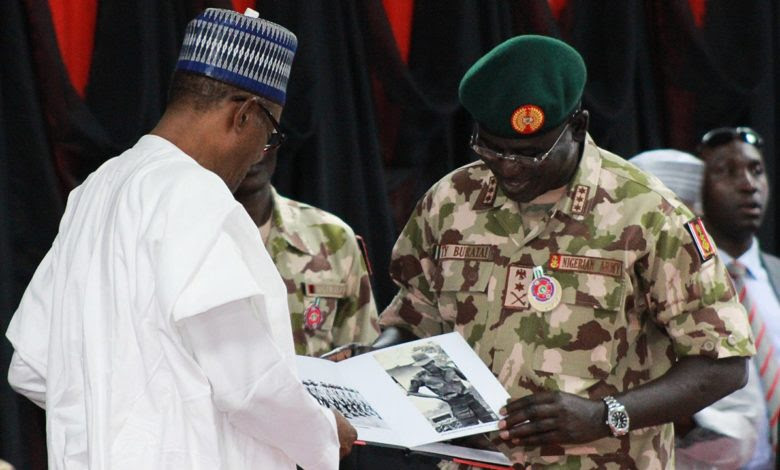 How Nigerian Army Is Weaponising ‘Fake News’ To Discredit Journalists

The Nigerian Army has occasionally made statements condemning the spread of misinformation which, it says, has the potential to undermine national security. It has more frequently debunked particular claims about its operations that are in circulation. But recent trends show that it might have extended its definition of “fake news” to include any information from journalists that it is not comfortable having in the publicㅡeven if true.

In May 2019, the army accused some individuals of “deliberately churning falsehood against the security agencies with a view to set the military against the people and the government”.

“They are also demoralising troops and security agencies through false accusations and fake news,” it said, adding that such actions had great consequences for the country.

The army itself, however, has been caught in the very act it has condemned time and again.

PREMIUM TIMES reported on July 11 that 356 soldiers, who are exiting the Nigerian Army, cited “loss of interest” as the reason. The paper noted that many of the soldiers withdrawing from service are those engaged in the war against insurgency in the Northeast and said insiders believed the trend “is an indication of low morale in the army due to poor leadership”.

“[The army has become] broken, demoralised and polarised more than ever before under Buratai,” the paper reported, quoting an army insider.

Similar reports have been published by TheCable, Punch Newspaper, and Global Sentinel which said, according to sources within the military, “many have either deserted, abandoned their positions, on AWOL or about to also disengage if nothing is done quickly to arrest the downward spiral of morale.:

Reacting swiftly, the Nigerian Army tagged the publications as “fake news” and “mischievous” in a series of posts on its social media handles.

It referred to the report as “fake and mischievous news story by supporters of Boko Haram designed to dampen the morale of gallant and patriotic soldiers”.

“The 386 soldiers who left the army disengaged in a normal routine exercise at the end of their service,” it said.

“The Nigerian Army is not in short supply of Nigerians willing to join its ranks. 4,600 patriots recently joined the Nigerian Army of which a large proportion opted to go into the Special Forces fighting terrorism.”

It did not comment on the motive behind the soldiers’ withdrawals but was able to persuade some Nigerians who rallied behind it in the comment section. “I can’t imagine the military so weak to respond to act of aggression. This is war directed at the army. What do [we] need to teach them lesson?” asked Ibrahim Tudu.

“Thanks for making this clarification. We are so delighted with this your counter-threat action to this unpatriotic psychological warfare against our front line soldiers by uninsightful media practices. We will do our part to publish this appropriately,” another user tweeted.

The army had also shared a publication on its official social media handles, titled, “We are Motivated, Willing to Fight Security Threats; Frontline Soldiers Debunk Loss of Interest.”

“The troops while expressing misgivings over social media report of alleged low morale, said they are well motivated, happy and ready to fight for their fatherland which is the professional responsibility of the Nigerian Army,” the report stated.

It added that some soldiers recently slept in the bush to wait for bandits as proof of their high morale.

A signed and sealed document sighted by HumAngle lends credence to the report that hundreds of soldiers applied to withdraw due to “loss of interest”.

The document, dated July 8, contains the list of soldiers approved for voluntary discharge for the first half of 2020, all numbering 380. It was signed by T.A. Gagariga, a brigadier-general, on behalf of the Chief of Army Staff.

The list has the full names of the soldiers, their army numbers, ranks, trade class, units, corps, and reasons for discharge.

While 24 said they were seeking disengagement to take up traditional titles, the rest cited “loss of interest” as their motive.

Their discharge is based on the revised Harmonised Terms and Conditions of Service for soldiers.

The events of last week are not the first time the Nigerian Army would be weaponising the expression “fake news” against the press. In April, it also labelled a report as “fake news” despite there being evidence that suggested the contrary.

PREMIUM TIMES had reported that the army suspended approval for voluntary retirement requests through an internal memo. The same day, the army posted a screenshot of the news page on Twitter with a “fake news” stamp and a caption warning readers to “be aware!”

This newspaper subsequently published a copy of the internal memo confirming its story.

“It is disheartening to [observe] the rate at which application for voluntary discharge soldiers [sic.] flood this headquarters and is becoming worrisome,” the document stated.

‘Army should work with, not against, journalists’

Olugbenga Adanikin, who heads the fact-checking unit at the International Centre for Investigative Reporting (ICIR), said though the military already partnered a number of news organisations, it needed to broaden its collaboration with journalists and also make sure it provided accurate and timely information.

“Unfortunately,” he continued, “agencies of government would rather wait until half-baked or reasonably true information is put out and then start thinking of damage control.

“The military, in particular, is very sensitive, so we cannot afford to allow misinformation to flourish as it will have a severe impact on the nation’s territorial integrity,” he said.

He advised the government to be proactive in giving reliable information, especially using official social media handles, in order to foster a win-win situation for both the military and the media the good of the public.

This story is republished with permission from Humangle