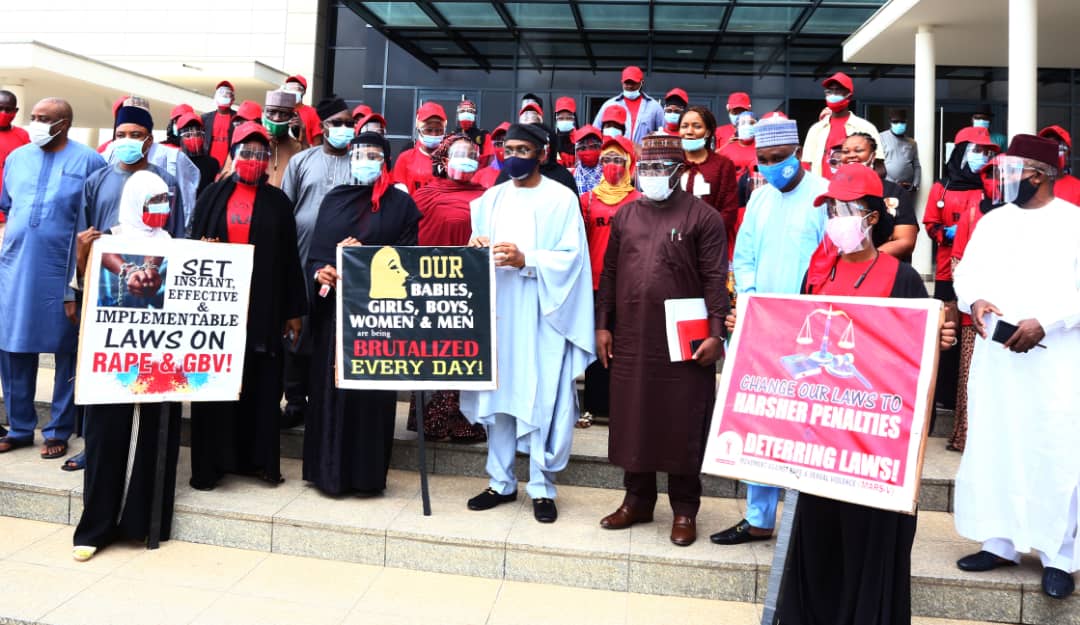 Speaker, House of Representatives, Rep. Femi Gbajabiamila, Wife of the Kaduna State Governor, Aisha Ummi El-Rufai (middle) & house members in a group photography with the Movement Against Rape & Sexual Violence ( MARS-V) shortly after a courtesy visit to the Speaker over rising rape cases in the country at the National Assembly on July 15, 2020.

Rapists should be castrated — Gbajabiamila

The Speaker of the House of Representatives, Femi Gbajabiamila, has advocated for severe punishment for rapists as a way of fighting the rising cases of rape and sexual violence in Nigeria.

Mr Gbajabiamila said the stern punishment could involve “chopping off the genitals” of convicted rapists.

Speaking on Wednesday when he received a delegation of the Movement Against Rape and Sexual Violence (MARS-V) at the National Assembly, the speaker said leaders and citizens must rise against rape.

Mr Gbajabiamila, who described the rising rape in the country as a pandemic, said the society, including the media, has a role to play in the fight against the pandemic.

He said the statistics on rape cases in Nigeria “is mind-boggling.”

He said Nigerians, especially those that hold religious views on rape, need adequate education and awareness against the rape pandemic.

“The issue of rape should be treated the way corona (virus) is treated. How do we treat a pandemic? There has to be a frontal onslaught. The media has a role to play. It should be in the front line. There’s a lot of work to be done from different angles.

“In a pandemic, you look for cure. No sane man would have sexual intercourse with a 3-month old baby. The idea alone is sickening,” Mr Gbajabiamila said.

He urged men to show solidarity with women in the fight against the scourge.

“Whilst I see so many women here with you, this is a fight not just for women. I can see some few men too, but this is a fight for all. Let a subliminal message be sent that even though over 95 per cent of the victims are women, let it be that it’s we, the men, that are championing your course.”

The speaker also said the Nigerian laws related to rape are weak, hence they would not deter people from engaging in the act.

Mr Gbajabiamila also said he believed a lot of rape cases are not reported as victims feel ashamed to speak out.

He urged the movement to make a presentation in that regard to see what can be done as financial support in the 2021 budget to be presented to the National Assembly in September.

Earlier, a wife of the Kaduna State governor, Aisha-Ummi El-Rufai, drew the speaker’s attention to the rising cases of rape in the country, saying it was becoming alarming and that urgent action needed to be taken.

She said the current trend is a situation where “our women are raped to death and butchered even in churches and mosques where God is worshipped.”

Their main reason for visiting the speaker, she said, was “to seek his help, ask questions, seek justice and challenge the status quo”.

She noted that statistics had shown that “717 reported rape cases and 7,170 unreported ones occurred in Nigeria within five months”.

She said while over 7,000 lives have been brutalised, with some destroyed and others terminated, “perpetrators of such heinous acts are not brought to justice even as the laws appear to the lenient”.

WASSCE: No going back on suspension of WAEC exam yet – Nigerian govt