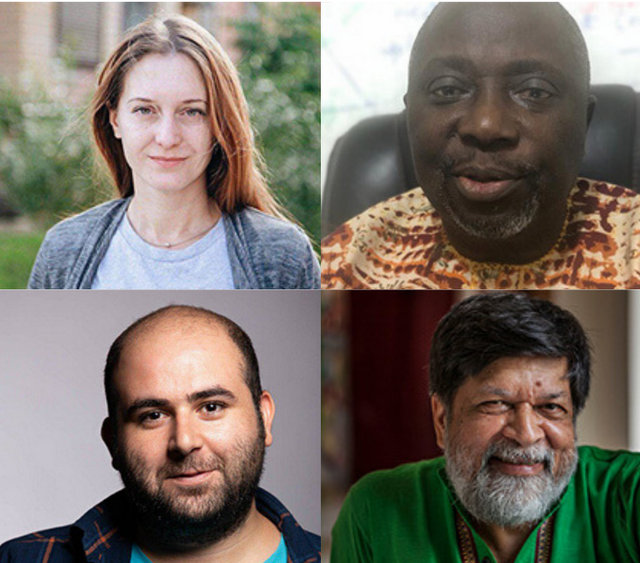 The Committee to Protect Journalists will honor four courageous journalists from Bangladesh, Iran, Nigeria, and Russia with the 2020 International Press Freedom Awards. All four have been arrested or faced criminal prosecution in reprisal for their reporting. CPJ will also honor lawyer Amal Clooney with the Gwen Ifill Press Freedom Award.

“Like brave and committed journalists everywhere, CPJ’s honorees set out to report the news without fear or favor for the benefit of their communities, their country, and the world,” said Joel Simon, CPJ executive director. “They understood that they would confront powerful forces, enemies of the truth, who would try to stop them from doing their work. What they did not foresee was COVID-19. The global pandemic has not only made their jobs more difficult and dangerous, it has fueled a ferocious press freedom crackdown as autocratic leaders around the world suppress unwelcome news under the guise of protecting public health.”

Shahidul Alam (Bangladesh): Alam is a renowned photojournalist and commenter, and the founder of the Bangladeshi multimedia training organization the Pathshala Media Institute and the Drik photo library. In August 2018, Alam was detained after posting a video to social media about student protests in Dhaka. He spent 102 days behind bars, and said he was beaten in custody, before being freed in November 2018.

Mohammad Mosaed (Iran): Mosaed is a freelance economic reporter who investigates corruption, embezzlement, labor issues, economic sanctions, and popular protests. Forced to resign from a reformist newspaper under government pressure, he publishes news on social media platforms. Mosaed was arrested in late 2019 in relation to a tweet, and released in early 2020. He was briefly arrested again in February after criticizing the government’s handling of COVID-19.

Dapo Olorunyomi (Nigeria): Olorunyomi is the co-founder, CEO, and publisher of the Nigerian newspaper Premium Times, and during his decades-long career as a journalist has been a fierce defender of press freedom in Nigeria despite repeated government harassment. He was arrested twice before having to go into hiding in 1995, and more recently he was arrested alongside a colleague in 2017 when police raided the Premium Times’ office on allegations of defamation.

Svetlana Prokopyeva (Russia): Prokopyeva is a regional correspondent for Radio Free Europe/Radio Liberty, known as Radio Svoboda. In early 2019, authorities raided her home, seized her equipment and personal belongings, and interrogated her. She was charged with “justifying terrorism” and her bank accounts were frozen in relation to comments she made on liberal radio station Ekho Moskvy in 2018, when she discussed a suicide bombing attack. This month she was convicted and ordered to pay a fine of 500,000 rubles (US$6,980). The prosecutor had sought a six-year prison term.

The Gwen Ifill Press Freedom Award is given annually by CPJ’s board of directors to recognize extraordinary and sustained commitment to press freedom. This year’s awardee, lawyer Amal Clooney, has represented embattled reporters around the world, including Wa Lone and Kyaw Soe Oo of Reuters, who were imprisoned in Myanmar for 17 months. She promotes freedom of speech and journalism through the Clooney Foundation for Justice’s TrialWatch initiative, which monitors the trials of journalists worldwide and provides free legal representation for those in need.

“Journalists in trouble have no better champion than Amal Clooney, which is why we are so delighted to honor her with the Gwen Ifill Press Freedom Award. A talented barrister, gifted negotiator, and powerful speaker, Clooney works tirelessly to free journalists unjustly targeted by despotic leaders using increasingly punitive laws to stifle reporting,” said Kathleen Carroll, CPJ board chair.

The winners will be honored on November 19, 2020, at CPJ’s annual benefit gala, to be chaired this year by Patrick Gaspard, President of Open Society Foundations, and hosted by veteran broadcast journalist Lester Holt.

Due to health and safety restrictions related to COVID-19, this year’s gala will be virtual, with video profiles, compelling press freedom stories, award presentations, and acceptance speeches streamed online and shared around the world.

Nigerian rights commission begs workers not to embark on strike