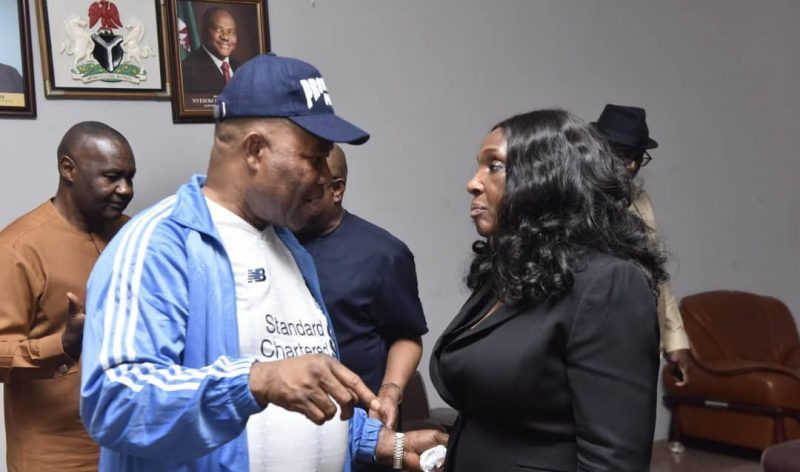 A former acting managing director of the interim management committee of the Niger Delta Development Commission (NDDC), Joy Nunieh, has accused the Minister of Niger Delta, Godswill Akpabio, of fraud.

“For instance, he told me to raise a memo to fraudulently award emergency contracts for flood victims in the Niger Delta,” she said.

Mrs Nunieh did not provide any evidence to support her claims against the minister.
The former acting MD, who made her claim in an interview with journalists shortly after appearing before the Senate ad-hoc committee investigating NDDC on Friday, said she would have been jailed if she had succumbed to Mr Akpabio’s ‘oath of secrecy’.

The video of the interview published by Channels TV has been in circulation online.

She said Mr Akpabio pressured her three times to place her “under oath” to the extent that they took the matter to the presidential villa, when she vehemently refused.

“He told me to take an oath. Though he denied that, he told me three times. We had a reconciliation at the Villa in the office of Sarki Abba, the S.A. to the President on Domestics,” she said.

Ms Nunieh said she feared that she would be jailed for five years if, under Mr Akpabio’s oath, she committed infraction on the Public Procurement Act and was not able to speak out, while he would be going about as a free man.

The former official said it was after her refusal to take the oath that Mr Akpabio started plotting her removal.

“He said he was going to remove me and then he started the campaign of calumny against me…,” she said.

Mr Akpabio’s spokesperson, Anietie Ekong, did not return calls and a text message seeking the minister’s response to the allegations on Saturday.

Speaking Saturday night on Arise TV, Mr Akpabio described Ms Nunieh as a “disgruntled former MD who does not know that offices come and go.”

“I’m not supposed to join issues with her as a minister of the federal republic,” he said.

He said the reason for the controversies was because a forensic audit was ordered and those who have questions to answer are behind the attacks.

Ms Nunieh assumed office as the acting MD of NDDC after the removal of Akwagaga Enyia in October 2019, but she was sacked four months later as the crisis rocking the commission over abuse of funds kept mounting.

President Muhammadu Buhari named Kemebradikumo Pondei, a professor of medicine, as her replacement in February. Mr Pondei on Thursday brazenly admitted that he spent N1.5 billion to “take care” of the commission’s staff as COVID-19 palliatives.

Mr Akpabio’s relationship with the sacked NDDC chief was fraught with mutual suspicion and powerplay, according to people familiar with the matter.

“The expected cooperation was not there (between the ministry and the NDDC),” a source close to Mr Akpabio told this newspaper.

During Friday’s interview, the sacked official said Mr Akpabio never signs any documents but prefers to use his subordinates as proxies in committing fraud.

“I refuse to go with him to the FEC (Federal Executive Council) meeting to deceive the president and the reason is because the law says if I contravene a section of the procurement Act, its five years imprisonment without an option of fine,” Mrs Nunieh said.

Ms Nunieh also explained her position on the controversial contracts in the NDDC, denying that she never made any payment without Mr Akpabio’s knowledge.

“One of the issues raised against me was that I awarded contracts without them knowing about it. I’m sure that is what they told you people yesterday.

“Nobody makes payments in NDDC without Godswill Akpabio’s consent. When we first came to NDDC on the day of the inauguration, we were going to the camp, he told me Madam MD, if you don’t do what I said, the same pen I used in signing your letter; that is the same pen I will use in removing you.

“He said the first thing I should do, when I get to Port Harcourt, is to change dollars in (the) NDDC account into Naira. I told him I am scared to do that. He claimed that I have a poverty mentality, that I was afraid of money. All of you knew he accused me of that, saying I am afraid to spend money.

“After two days, he came to Port Harcourt and told (me) that what I should do is to change dollars and I said I cannot just do that. He said I (should) remove Mr Kaltungo from legal and send him on compulsory retirement and he said we cannot have a northerner as head of the legal unit.”

Officials and ex-officials of the NDDC have been trading accusations and counter-accusations of fraud and abuse of office since President Buhari ordered the audit of the interventionist agency’s accounts last year.

The Senate had on May 5, set up a seven-member committee to investigate the “financial recklessness” of the Interim Management Committee (IMC) of the commission.

The lawmakers said within the last three months, the commission has spent over N40 billion of the commission’s fund without recourse to established processes of funds disbursement.

The NDDC management had said that the Senate investigation was instigated by people who want to scuttle the planned forensic audit of the commission.

The NDDC, backed by its supervising minister, Mr Akpabio, accused the Senate of corruption and undue interference in the running of the commission.

The NDDC, on June 6, released a shocking statement which appears to implicate the Chairman of the Senate Committee on the Niger Delta and the NDDC, Peter Nwaoboshi, in N3.6 billion contract fraud in the commission.

Mr Nwaoboshi denied the allegations, saying he did not have any relationship with the companies mentioned by the NDDC.

How court awards N20 million against 1004 Estate Limited over rights violation of Tayo Soetan, others