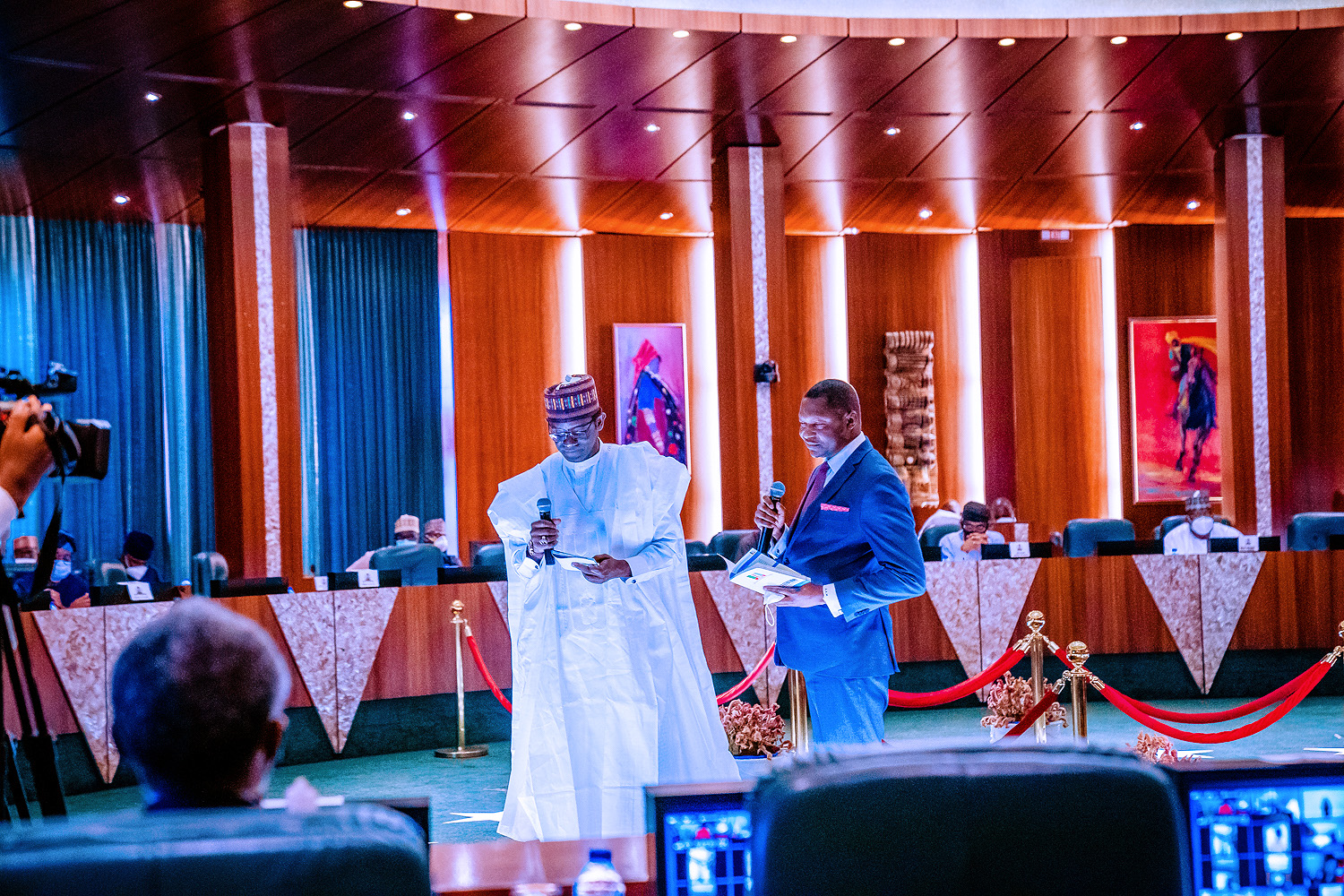 On Thursday, at its virtual meeting, the National Executive Committee (NEC) of the ruling All Progressives Congress (APC) appointed a 13-member National Caretaker Committee to run the party.

This followed the dissolution of the National Working Committee (NWC) led by Adams Oshiomhole.

Below are the profiles of some of the National Caretaker Committee members.

Mai Mala Buni: He will serve as the chairman of the Committee: Mr Buni is the current governor of Yobe State.

He had served as national secretary of the party before his election as governor in the 2019 general elections.

Mr Buni, 52, served as Chairman of the ANPP in Yobe State and thereafter as the special adviser to former Governor Ibrahim Gaidam on political and legislative matters.

John James Akpanudoedehe: He will serve as the secretary of the NCC. Mr Akpanudoedehe is a former senator for Akwa Ibom North East (1999-2003) on the platform of the PDP and a former Minister of State for FCT in the administration of late President Umaru YarÁdua.

Before then, he served as Chairman of Uyo LGA. He also served as the Chairman of Godswill Akpabio Campaign Organisation in 2006/2007.

Mr Akpanudoedehe holds first and a second degree in Sociology and Anthropology from the University of Calabar.

Ken Nnamani: Mr Nnamani is the representative of the South-East geopolitical zone in the NCC.

He was Senate President between 2005 and 2007 during which the upper legislative chamber achieved some level of independence.

Mr Nnamani, 72, who represented Enugu East Senatorial District, served as Chairman, Senate Committee on Federal Character and Governmental Affairs, as well as a member of committees of privatisation, FCT and Finance.

Although still a member of the PDP on whose platform he was elected a senator, in October 2016, Mr Nnamani was appointed the Chairman of the 24-member Constitution and Electoral Reform Committee by the APC federal administration. The committee submitted its report in May 2017.

In January 2017, he resigned his membership of the PDP on whose platform he was elected senator and joined the APC.

David Lyon: He represents the South-South geo-political zone. Mr Lyon was the governorship candidate of the APC in Bayelsa State in the November 18, 2019 election. He was declared winner of the election but was disqualified by the Supreme Court a day before his inauguration on grounds that his running mate, Degi Eremienyo Wangaga, submitted a fake certificate to INEC.

Born in December 1970, Mr Lyon joined politics in the Third Republic as a member of the defunct National Republican Convention (NRC). He once served as a councillor in Southern Ijaw LGA and later joined the PDP when the current democratic dispensation began in 1999.

Mr Lyon however defected to the APC in 2015 and emerged as the party’s governorship candidate in 2019.

Governor Isiaka Oyetola: He will represent the South West zone in the committee. Mr Oyetola is the governor of Osun State. He assumed office in 2019 having won the September 22, 2018 governorship election on APC ticket.

Before he became governor, Mr Oyetola, 65, served as the Chief of Staff to his predecessor, Rauf Aregbesola.

Governor Sani Bello: The Niger State governor is the representative of the North-Central zone in the committee.

He was first elected as governor in 2015 and was re-elected in 2019 on the platform of the APC.

Born in November 1967, Mr Bello, holds a degree in Economics from the University of Maiduguri. He is the eldest child of a former military governor of the old Kano State, Sani Bello, a retired colonel.

Tahir Mamman: A professor of law and Senior Advocate of Nigeria, Mr Mamman will represent the North East Geo-political zone in the NCC.

He is currently the Vice Chancellor of Baze University in Abuja.

The 66-year old Mamman, who hails from Adamawa State, contested for the APC governorship primary in December 2014 but lost to Mohammed Bindow, who later became the governor.

Abubakar Yusuf: Mr Yusuf will represent the Senate in the committee. He is a two-term member representing Taraba Central Senatorial District. He is the Vice Chairman of the Senate Committee on Cooperation and Integration in Africa and NEPAD.

Born in December 1956, Mr Yusuf holds a degree in Economics from Ahmadu Bello University, Zaria and a master’s degree from East Anglia University.

Akinremi Olaide: Mr Olaide is the representative of the House of Representatives in the committee. Mr Olaide, 48, represents Ibadan North Federal Constituency of Oyo State.

Stella Okorete: Mrs Okotete, who hails from Delta State, is to represent women in the NCC. She is the Executive Director (Business Development) of Nigerian-Export Bank (NEXIM).

She graduated in International Relations and Diplomacy from Benson Idahosa University and holds a Diploma in Law from the Rivers State University of Science and Technology.

Until her appointment as NEXIM executive director, Mrs Okotete had served as the Special Assistant and Adviser to the Delta State Governor on Millennium Development Goals (MDG).

James Lalu: He represents the physically challenged in the committee. He hails from Plateau State.

Mr Lalu served as senior special assistant to former Governor Jonah Jang for eight years. He also served as a member of the Board of Plateau State Disability Rights Commission. Mr Lalu later emerged the chairman of the Commission following his appointment by Governor Simon Lalong in 2017.

Ismail Ahmed: He will represent the youth in the committee. Mr Ahmed is a lawyer and has served as the interim chairman of the APC Youth Forum (APYF). He was a member of the defunct Congress for Progressive Change (CPC), a party founded by President Muhammadu Buhari.

Buhari felicitates with Gbajabiamila at 58