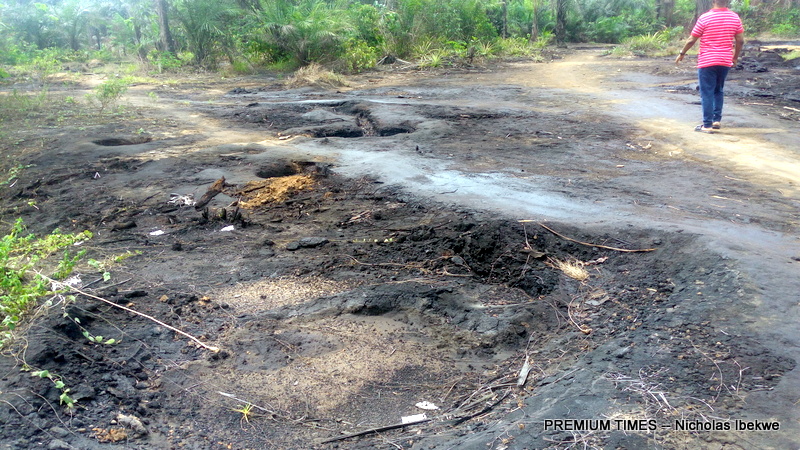 Oil spill near a farmland in K-Dere, Ogoniland

The Nigerian government has said the ongoing remediation project of the hitherto polluted Ogoniland, which was launched in 2016, has created 775 jobs for qualified Nigerians.

The minister of environment, Mohammad Abubakar, stated this on Wednesday while briefing journalists after the Federal Executive Council (FEC) meeting.

The minister said he presented the ministerial performance report at the cabinet meeting, listing some of the achievements of the ministry and the proposed plans for the new budgetary calendar year..

He said a total of 57 sites impacted with hydrocarbons are currently being cleaned up, and that more are being planned for remediation.

He said; “There is also a programme to train 400 women in areas of agriculture, aquaculture and poultry as a way to improve the living standard of the people.”

But the minister’s claims have been faulted by various stakeholders including youth organisations, civil societies and community groups.

These groups include the Ogoni Youth Federation (OYF); Gbo Kabaari, a group of Ogoni elders, and Youth and Environmental Advocacy Centre, among others.

In many of its statements issued on the development, the Gbo Kabaari described the cleanup activity as a fraud, saying none of the emergency interventions recommended in the UNEP report, such as comprehensive medical examination of everyone that has consumed the contaminated water or eaten its aquatic sources of food, has been provided.

The group lamented that the Integrated Contaminated Soil Management Centre in Bori, a hydrocarbon remediation and research centre, has been overtaken by weeds after the celebrated groundbreaking ceremony in 2017.

In its own statement issued on Tuesday to mark the fourth anniversary of the commencement of remediation work in Ogoni land, the advocacy centre described the cleanup activities within the last four years as a waste.

“Advocacy Centre, however, regrets to note that four years down the line, neither the black crude nor emergency measures has been cleaned up or implemented by HYPREP in Ogoniland,” the statement signed by the centre’s executive director, Fyneface Dumnamene, noted, adding that; “Four years down the line, Ogoni people are still drinking polluted water and could be exposed to contracting coronavirus disease (COVID-19) as they do not have clean and/or running water to wash their hands regularly as recommended by Nigeria Centre for Disease Control (NCDC).”

The leader of the OYF, Yamabana Legborsi, told PREMIUM TIMES that his organisation has also taken the remediation implementation agency, Hydrocarbon Pollution Restoration Project (HYPREP), to a federal high court in Rivers State over what it described as lack of transparency and accountability in the agency’s operation and particularly the award of contracts.

Following the invitation of the Nigerian government, in 2011, the United Nations Environmental Programme, UNEP, carried out an assessment of the oil pollution in Ogoni and surrounding communities.

The study found an unprecedented concentration of benzene, a carcinogen, in the outdoor air and drinking water in the area, among other similar discoveries. The global agency’s report stated that the contamination of Ogoni and neighbouring communities was so severe that clearing the pollution will take up to 30 years. It recommended an initial capital injection of $1 billion to be paid by the Nigerian government and oil companies to fund the cleanup.

After dilly-dallying for five years, in June 2016, President Muhammadu Buhari, represented by his deputy, Yemi Osinbajo, flagged off the cleanup amidst fanfare at Bodo.

Meanwhile, the minister added that apart from the government’s achievements in Ogoniland, his ministry is committed to planting 25 million trees in collaboration with the state governments.

Mr Abubakar said out of 774,000 jobs that the president has approved to be created, the ministry of environment as one of the implementing agencies is to employ 200,000 skilled and unskilled labour, and another 2000 through the erosion department.

He said the ministry is also creating jobs in the area of waste recycling through reduce, reuse, repair and recover waste.

He said; “It is no longer fashionable to just produce, use and dispose because the planet is getting too choked up with pollutants. We are very big in recycling.

“Finally, we are big in erosion control which you all know is a big problem in the south East. As you know, the South East is more prone to erosion because of the geologic nature of the area.”

He said post COVID-19, the ministry is working to reduce the emission from carbon dioxide from generators and other gaseous emissions causing climate change.

He said about 4,000 jobs will be created in this area, and their main mandate will be to keep tap on emissions including vehicular emissions.

The minister said the ministry is also targeting to create 32 jobs from recycling of engine oil from motorcycles and other vehicles to produce diesel, which can in turn be reused.

On the green bond project, which is to produce clean energy, he said the proceeds will be used to produce solar energy for tertiary institutions. He said already 20,000 jobs has been created.