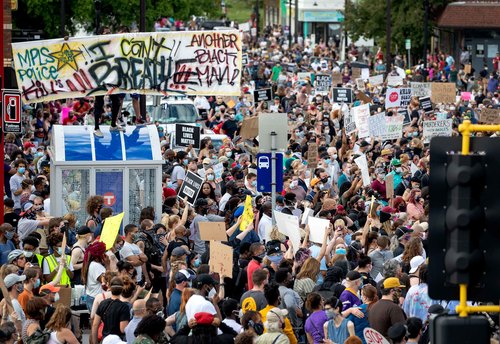 Protesters gather calling for justice for George Floyd on Tuesday, May 26, 2020, in Minneapolis. Four Minneapolis officers involved in the arrest of Floyd, a black man who died in police custody, were fired Tuesday, hours after a bystander's video showed an officer kneeling on the handcuffed man’s neck, even after he pleaded that he could not breathe and stopped moving. (Carlos Gonzalez/Star Tribune via AP)

As chaos spreads across cities in the United States, President Donald Trump has vowed to return order to American streets using the military if widespread violence does not stop.

“If a city or state refuses to take the actions necessary to defend the life and property of their residents,” Mr Trump said in his Monday night address, “then I will deploy the United States military and quickly solve the problem for them.”

My fellow Americans – My first and highest duty as President is to defend our great Country and the American People. I swore an oath to uphold the laws of our Nation — and that is exactly what I will do… pic.twitter.com/pvFxxi9BTR

Demonstrations broke out across cities in the U.S. last week over the death of an unarmed black man, George Floyd, in police custody.

Private autopsy says Mr Floyd died of suffocation after a white policeman pinned him to the ground for almost nine minutes.

Since his death a week ago, protesters have run amok in some states, setting police vehicles and offices on fire, forcing their mayors to declare curfews. This is even as thousands of National Guard personnel are being deployed to states.

There have also been reports of wide looting and vandalism. In some cities, authorities have used force and journalists have been attacked.

Mr Trump described himself as “your president of law and order,” whose first and highest duty “is to defend our great country and the American people. I swore an oath to uphold the laws of our nation and that is exactly what I will do.”

He said he would use his entire presidential power — and if need be, invoke a law last used in 1807 — to ensure violent protests end, declaring he would deploy “thousands and thousands of heavily armed soldiers, military personnel and law enforcement officers” to bring order.

Later, Mr Trump walked across the park to St. John’s Episcopal Church, which was partially burnt in a Sunday evening protest, bible in hand, helicopter hovering in the sky, for a photo opportunity.

His critics say he did this to douse the accusations of being holed up in the White House over the weekend.

But Mr Trump said justice would be served for George Floyd, because himself, along with many other Americans, was “rightly sickened and revolted” by video showing the incident.

In an update released by the medical examiner in Hennepin County, Minnesota, on Monday, George Floyd’s death was ruled as homicide, caused by the abrupt loss of heart function while being “restrained by law enforcement officers.”

A private autopsy launched by Mr Floyd’s family also said he “died from asphyxiation caused by sustained neck and back compression that led to a lack of blood flow to his brain.”

Apart from demanding justice for Mr Floyd and ending racism worldwide, protesters are calling for police reform in the United States, a security outfit that Economist newspaper said killed 1099 people in 2019. A black man is three times more likely to be killed than a white man, it said.

Only Nigerian firms to bid for 57 marginal oil fields — DPR