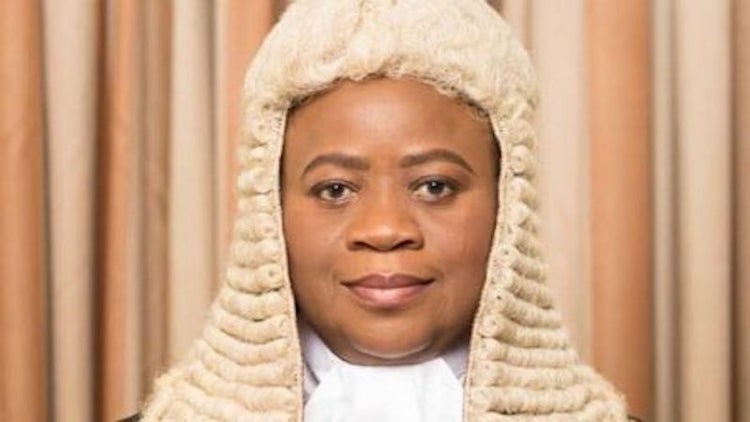 The President of the Court of Appeal, Monica Dongban-Mensem. [PHOTO CREDIT: Thisday Live]

President Muhammadu Buhari has extended the appointment of M. B. Dongban-Mensem as the Acting President of the Court of Appeal (PCA) with effect from June 3 for a further period of three (3) months.

This is pursuant to Section 238(4) and (5) of the Constitution of the Federal Republic, Mr Buhari’s spokesperson, Garba Shehu, said.

Mrs Dongban-Mensem was sworn in as acting court of appeal president by the Chief Justice of Nigeria, Tanko Muhammad, on March 6.

The swearing-in followed Mrs Dongban-Mensem’s appointment by President Muhammadu Buhari after Justice Zainab Bulkachuwa retired as she clocked the statutory mandatory retirement age of 70 years as Justice of Appeal Court.

Swearing her in, Mr Muhammad urged Mrs Dongban-Mensem to continue to discharge her duties diligently, noting that hardworking and discipline earned her the new position.

“As a seasoned judicial officer, there is nothing to tell her but just to work very well.

“She has been doing her job satisfactorily well and it is as a result of this hard work, character, and attitude that enticed the Court of Appeal and the National Judicial Council to uplift her as Acting President Court of Appeal.

“I urge you to continue to with your charisma, both attitude and ability, to carry out all the tasks and assignments you are given to.

“Our expectation will never fall short of this kind of testimony from the public. Please continue to bear that testimony and the sky will be your limit,” Mr Muhammad said.

Mr Muhammad urged her to carry along her colleagues, pointing out that consultation was important in discharging her duty.

Mr Lalong said the appointment was an indication that the judiciary is taking its rightful place.

Mrs Dongban-Mensem, who is from Shendam Local Government Area of Plateau, was the presiding justice of the Court of Appeal, Jos division.

Mrs Dongban-Mensem, in 2015, headed a five-member appeal panel that upheld the ruling of the governorship election tribunal in Rivers, which ordered the sacking of Governor Nyesom Wike of the Peoples Democratic Party and a rerun within 90 days.

Mrs Dongban-Mensem received LL.B and LL.M degrees from the Ahmadu Bello University, Zaria. She is the daughter of a retired appeal court judge, M.B. Douglas-Mensem.