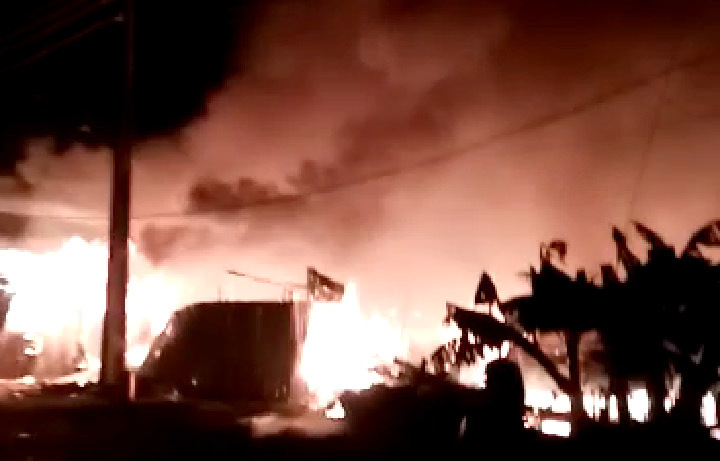 Another fire outbreak in Lagos

Another fire outbreak in Lagos

Barely one week after a fatal explosion at the Abule Ado area of Lagos, another fire outbreak occurred in the early hours of Saturday at L Close, 7th Avenue Festac Town, Lagos.

The fire which started at 2 a.m. affected many shops and buildings in the area, witnesses told PREMIUM TIMES.

Shakiru Amodu, the spokesperson of Lagos State Fire Service, told PREMIUM TIMES that shanty buildings in the area were engulfed by the fire.

“The fire started around 2 a.m. but we got the call around 2:27 a.m. We were able to completely put out the fire after two hours of combating it, precisely 5: 35am,” Mr Amodu said.

Mr Amodu said the fire outbreak was as a result of careless handling of combustible materials and it took a combined effort of the Lagos State Fire Service and the Federal service stationed at Festac to put it out.

“It was due to careless handling of combustible materials, people were doing some things over the night before the fire emanated from them.”

“We are taking time to do proper enumeration of the number of structures affected because it was a shanty area,” the spokesperson said.

“We are also trying to conclude on the cause of the fire and the careless attitude that led to it, they are still trying to hide some facts from us, but generally, it is careless handling of combustible materials,” he added.

PREMIUM TIMES earlier reported how a fatal explosion occurred at Abule Ado area of the state last Sunday, causing the death of no fewer than 20 persons and destruction of properties.

The Nigerian National Petroleum Corporation (NNPC) said that the explosion occurred when a truck hit gas cylinders stacked in a gas processing plant located close to the pipeline.

Hundreds of people whose properties were destroyed by the fire became displaced, while many were injured in the fire. The fire also rendered the community uninhabitable due to the level of destruction.