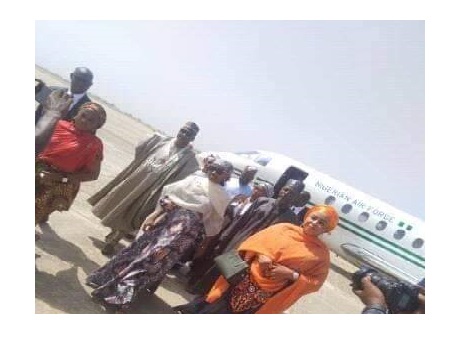 Presidency, PDP disagree on use of presidential jet by Buhari’s daughter

President Muhammadu Buhari’s family and any other person he authorizes can use the presidential jet, a presidential aide has said.

The aide was referring to the use of the presidential jet by Mr Buhari’s daughter, Aisha, for a private assignment in Bauchi State.

But the main opposition party, PDP, has condemned Ms Buhari’s use of the presidential jet.

The Senior Special Assistant to the President on Media and Publicity, Garba Shehu, in a statement on Saturday, defended the use of the presidential jet by Ms Buahri, saying her trip followed due process.

The president’s daughter was on a “study tour” of Bauchi Emirate as part of her fieldwork for her ongoing Master’s programme in Photography, PREMIUM TIMES learnt.

Ms Buhari completed her first degree in June 2019 at the Ravensbourne University, London. She was part of the university’s convocation ceremony on December 4. She is studying for her Masters at the same university.

Ms Buhari, a first-class graduate in photography and youngest daughter of the president, was criticised by many Nigerians for using the presidential jet for a private function.

In response, Mr Shehu said: “It’s true that a member of the First Family was flown to Bauchi yesterday on a mission duly authorised. It wasn’t an impromptu or improper trip because it followed normal procedure.

“The normal practice in existence for a long time is that the Presidential Air fleet is available to the President and the first family and four others.

”These four are the Vice President, the Senate President the Speaker and any other person(s) authorised by the President,” he added.

The PDP in a statement made available to PREMIUM TIMES on Saturday described the action as provocative, condemnable, and completely improper.

The opposition party added that the use of the presidential jet was a slap on the sensibilities of millions of Nigerians.

”Moreover, the rules do not grant the President any powers to transfer any paraphernalia of office or privileges of his position to any of his children,” the opposition party said.

”Our party holds that Mr. President should apologise for approving that his daughter uses the presidential jet just for the purpose of allegedly taking photographs in a Durbar event in Bauchi State.”

Nigerians spent N7 billion on movies in cinemas in 2019