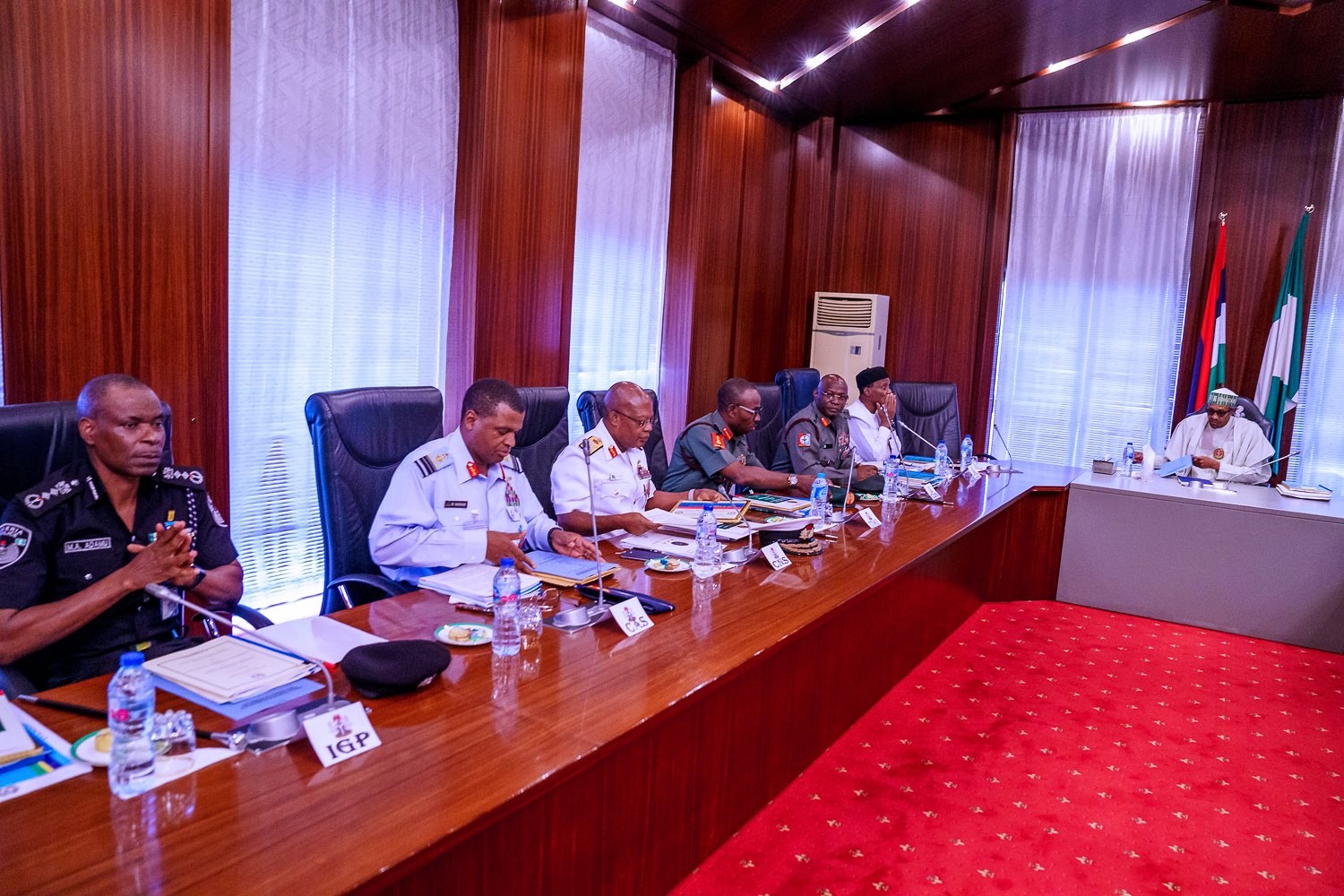 FILE: President Buhari receives Security Briefings from (now ex-) Service Chiefs and other heads of the security agencies at the Presidential Villa in Abuja. [PHOTO: Presidency]

President Muhammadu Buhari on Monday in Abuja presided over a meeting of the security council where he directed security chiefs to ensure peaceful and stable socio-economic environment across the country.

Addressing State House Correspondents after the meeting, Chief of Naval Staff, Ibok Ekwe-Ibas, a rear admiral, said the meeting appraised the nation’s security situations in 2019 with emphasis on ongoing internal and regional operations.

“Mr President has directed that the council and the members of armed forces ensure a peaceful society in 2020.

“To that effect, we are more than determined to continue from where we stopped in 2019 and to ensure that we sustain our various operations to ensure a secured Nigeria for all of us,” he maintained.

He revealed that the meeting resolved to assess to security developments in areas where relative peace had been restored with a view to withdrawing the military to concentrate on other emerging threats and concerns in the country.

He said: “With respect to operations within the country, it was generally agreed and noted that the security agencies have done their very best in ensuring that the deliverables are made clear.

“You will recall that the various operations in the country in the northeast, northwest, north central, the southeast as well as the southwest where all members of the armed forces are taking part as well as the intelligence agencies have ensured that we all enjoyed a better holiday period that has just been observed.

“We also recalled that in those areas where the military have been able to achieve desired objectives, from the first quarter of next year, the civil authority will be preparing to take back those responsibilities as the military draws back its forces from those areas.

“This will enable the military to focus its attention on other emerging threats and areas of concern.”

On maritime security, the Naval boss disclosed that a lot had been achieved in the protection of the nation’s maritime environment.

“It also observed that in the maritime environment a lot has been done to ensure that our resources are protected.

“The outcomes of the operations there are have seen to the arrest of about six vessels that were involved in stealing of the nation’s maritime resources,” Mr Ekwe-Ibas said.