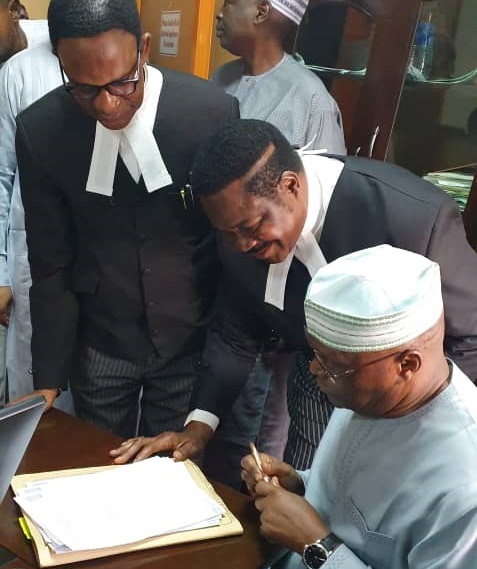 Atiku Abubakar sign his deposition in support of a N2.5 billion libel suit against an aide to President Muhammadu Buhari

Former vice president, Atiku Abubakar, on Tuesday, appeared before the registry of the Federal Capital Territory High Court in Maitama, to sign his deposition in support of a N2.5 billion libel suit against an aide to President Muhammadu Buhari.

Mr Abubakar had filed a libel suit against Lauretta Onochie, who is Mr Buhari’s special assistant on social media.

Photographs of the former vice president and his legal team were sent to PREMIUM TIMES on Tuesday by his lead lawyer, Mike Ozekhome.

“The former Vice President was physically at the Registry to sign his witness deposition (on oath) before the Commissioner for Oaths, on the case he instituted against Lauretta Onochie,” Mr Ozekhome wrote in the accompanying text.

“The Waziri is claiming amongst others, the sum of N2.5bn only from the Presidential Assistant on Social Media, as general, aggravated, punitive and exemplary damages against her.

“Atiku is claiming this sum from her for her defamatory story published on her twitter handle and Facebook page, in which she stated that Atiku was on the UAE watch list.”

Mr Abubakar filed the suit against Mrs Onochie on June 26. He also demanded a retraction and an apology from Ms Onochie.

Mr Abubakar, who ran for president in February, asked the court to stop Ms Onochie from making further publications considered as denigrating his character.

He asked the court for the following orders:

“An order of this Honourable court compelling the Defendant to make a retraction of, and apology to, the Claimant, for the said offensive twitter and facebook publications on the same platforms, also to be published in three national newspapers with wide circulation within the country and also broadcast on AIT, Channels and NTA television stations, consequent upon the untold embarrassment, public ridicule, odium, obloquy, derision, marital disharmony, mental agony and psychological trauma which the Defendant’s said defamatory twitter and facebook publications have caused the Claimant.

“An order of this Honourable court compelling the Defendant to write to the Claimant, a letter of unreserved apology for the said offensive twitter and facebook publications which were widely circulated vide the Defendant’s twitter/facebook handles and also published globally online on the social and other print media, consequent upon the embarrassment, ridicule, derision, marital disharmony, mental agony and psychological trauma which the Defendant’s said defamatory twitter and facebook publications have caused the Claimant.

“An order directing the Defendant to pay to the Claimant, the sum of N2,500,000,000,000.00 (Two Billion, Five Hundred Million Naira) only, representing general, aggravated, punitive and exemplary damages over the untold embarrassment, derision, public ridicule, odium, obloquy, marital disharmony, mental agony and psychological trauma which the Defendant’s publications have caused the Claimant.