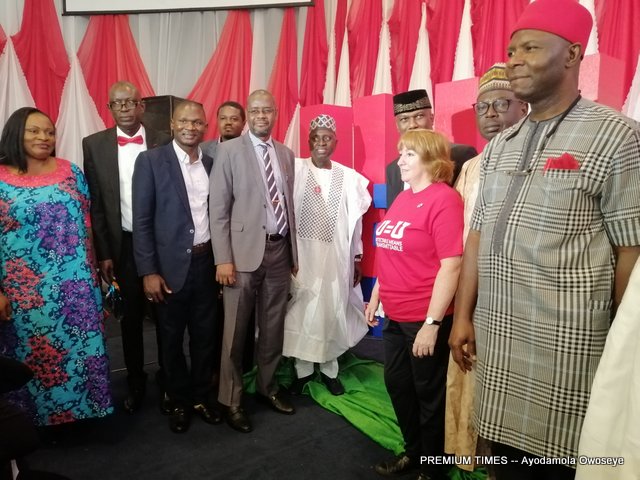 The unveiling of the U=U HIV campaign in Abuja

To become HIV-free, Nigeria needs to combat the transmission of the epidemic among the vulnerable communities, UNAIDS has said.

In an interview with journalists in Abuja on Monday, the Country Director of UNAIDS, Erasmus Morah, said new cases of HIV are still being transmitted among the vulnerable groups.

He said this can only be stopped if the government makes testing and treatment available to them.

Mr Morah was speaking against the backdrop of the newly launched HIV prevention campaign tagged U equals U (U=U) means Undetectable =Untransmittable.

The campaign was launched by the Federal Ministry of Health and National Agency for the Control of AIDS (NACA) in collaboration with the U.S President’s Emergency Plans for AIDs Relief (PEPFAR).

The launch was part of the preparations for the celebration of World AIDS Day (WAD) on December 1. WAD is celebrated to raise awareness on the deadly disease and encourage people to go for testing and to be placed on treatment if tested positive. The theme for this year’s WAD is “Communities Make the Difference.”

The U=U campaign is to tell the success story of viral load suppression among people using antiretroviral.

This means that someone living with HIV who is on treatment and virally suppressed cannot transmit the virus to a sexual partner.

Though the development is revolutionary, Mr Morah said Nigeria will be able to celebrate better when it tackles the issues of the left behind people who are yet to be tested.

Mr Morah said Nigeria needs to know the source of the newly transmitted cases as this will be the best place to start proffering solutions.

He also lamented that Nigeria still has a huge challenge of Mother to Child Transmission.

He said the question Nigeria needs to answer is ‘where are the new infections coming from?’ He said the last HIV survey done in the country gave new data on the people living with HIV and their demographic background.

“Among what we found out is what we in the UN call key populations and these are sex workers, men who have sex with men, and injection drug users. We need to start talking about the vulnerable groups, those people who take the risk, bring to the front what is usually hidden.

“The biggest challenge for mother to child transmission is that many mothers do not go to health facilities and at this point, many mothers are been missed.

“We know that we cannot make any progress about this epidemic unless we bring everything onto the table,” he said.

However, the Director-General of NACA, Aliyu Gambo, said Nigeria has been able to gain grounds in controlling the epidemic.

He said there has been a reduction in the national prevalence of HIV in Nigeria. This, he said has dropped to 1.4 per cent from 2.8 per cent among adults aged 15 to 49 years.

Mr Gambo said Nigeria was able to achieve this feat through the collaborative support of international partners, civil society organisations and among others.

He, however, said much still needs to be done and solicited for the support of all Nigerians to eradicate the disease from the country.

He urged the communities made up of the Networks of People Living With or are affected by HIV, women and young people, peer educators, and counsellors to come together and encourage people living with AIDS to continually use antiretroviral as a means of suppressing the virus.

“The efforts of the communities are more than ever needed to ensure that HIV remains on the political agenda and galvanise international and national funding for HIV to ensure the UNAIDS 90:90:90 goals are achieved and sustained,” he said.