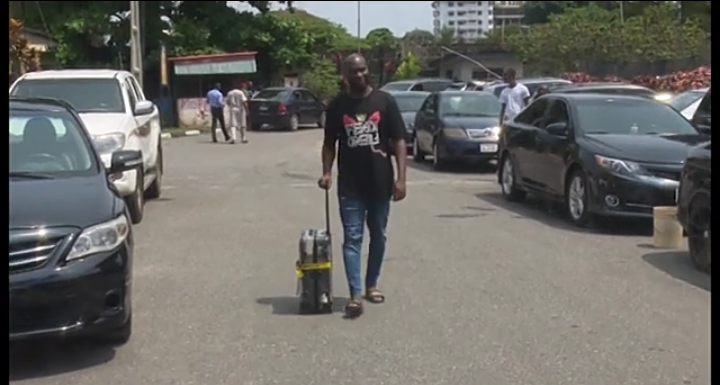 Ismaila Mustapha (Mompha) being arrested by the EFCC

The Economic and Financial Crimes Commission on Tuesday provided details of how Ismaila Mustapha was arrested last weekend.

Mr Mustapha, more famous as ‘Mompha’, was arrested at the Murtala Muhammed International Airport in Lagos while trying to depart Nigeria for Dubai on October 18, the agency said in a statement.

The statement came hours after PREMIUM TIMES reported news of Mr Mustapha’s arrest by anti-graft operatives on allegations of fraud.

Mr Uwujaren earlier confirmed the arrest but told PREMIUM TIMES addition details were underway. Shortly after the close of business on Tuesday, the EFCC disclosed that it received intelligence reports about Mr Mustapha’s alleged fraudulent activities and closed in on him just as he was preparing to depart Nigeria.

He had been based in Dubai for several years where he reportedly runs a money-changing business, according to his social media claims.

The EFCC punctured Mr Mustapha’s business as a ruse, saying he had been using bureau de change as a cover for illicit trade and money laundering enterprise.

Mr Mustapha “perpetrates his fraudulent activities under the guise of being a bureau de change operator,” the anti-graft body alleged.

“Investigations have also revealed” Mr Mustapha has been using his money-changing business, which he jointly owned with his siblings, “as a decoy to launder his proceeds of crime,” officials said.

Mr Uwujaren said Mr Mustapha had “volunteered useful information to the operatives and has admitted being reasonably involved in the first two cases he was alleged to be involved.”

The EFCC credited “actionable cross border intelligence received from collaborative law enforcement agencies about his alleged involvement in the criminal activities” for the arrest, adding that the intelligence “further strengthened our suspicion.”

At the point of arrest, five wristwatches with a total worth of over N20 million were recovered from Mr Mustapha, who would be charged to court as soon as investigation is concluded, EFCC said.

It was unclear whether Mr Mustapha had contacted his lawyers. PREMIUM TIMES could not immediately confirm whether he has a spokesperson.