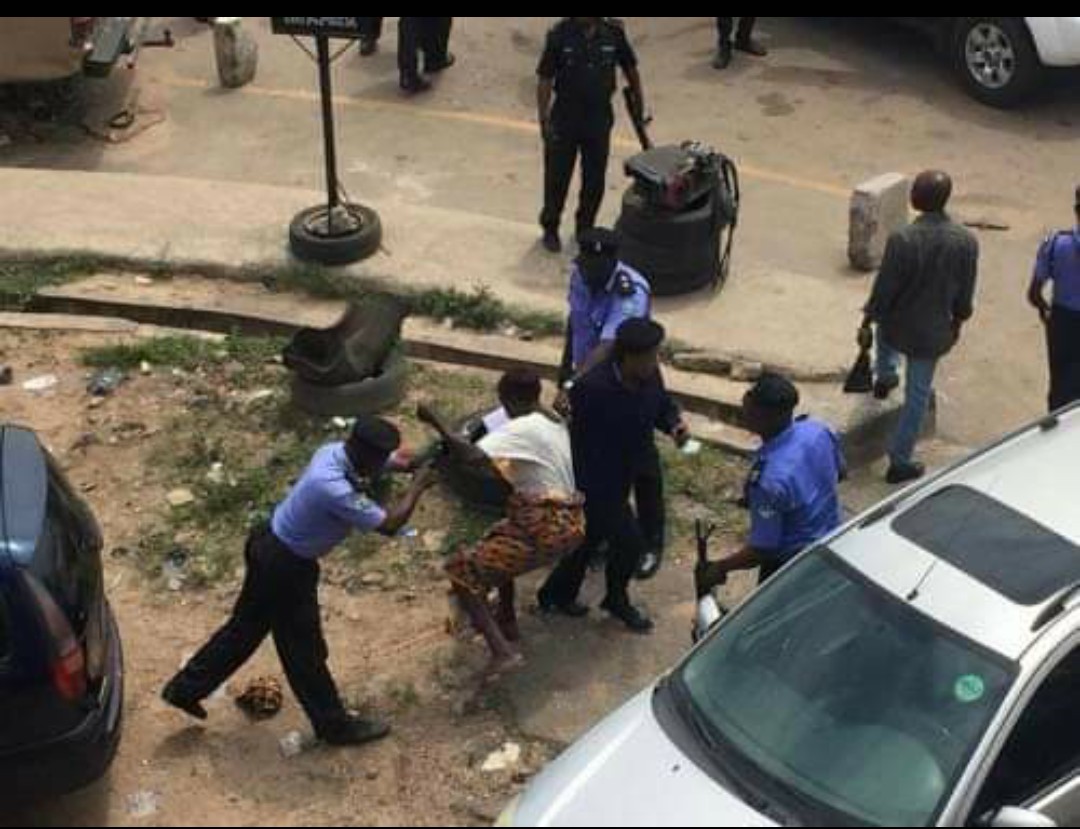 A 70-year-old fufu seller, Sariyu Akanmu, who was brutalised in Osogbo, Osun State, by the police during #RevolutionNow protest last week, has spoken on why she joined the protest and how she was attacked.

PREMIUM TIMES reported how protesters across some states in Nigeria expressed their displeasure over the challenges faced by citizens including unemployment, insecurity, poor infrastructure and lack of access to basic social amenities.

Prior to the protest, the lead campaigner, Omoyele Sowore, was arrested by the State Security Service (SSS) at his Lagos residence.

Mr Sowore has since remained in the custody of the SSS based on a court order.

Despite Mr Sowore’s arrest, other organisers of the protest went ahead with it.

This newspaper also reported how police in different states brutalised protesters, including journalists covering the protests, and arrested some of them.

Among those brutalised in Osogbo was Mrs Akanmu.

She spoke to PREMIUM TIMES at her one-room residence.

The woman who lives in her husband’s family house said she was hawking fufu— fermented and cooked cassava – when she saw protesters around Olaiya/Fagbewesa junction on Osogbo.

“I heard the protesters talking about suffering in Nigeria and particularly unemployment. I have kids who are yet to secure jobs many years after graduation. I became moved by their demands,” she said in Yoruba.

“I was dragged from the protest and beaten by two police officers. One of them hit me with his boot. My cloth got torn and was left helpless,” she said. Mrs Akanmu said it took the effort of people around to help her clean up as she returned home.

Mrs Akanmu said she could not visit any hospital because there was no money to foot the bill. She has since then remained indoors.

She also narrated her childhood experience.

“I would have been educated myself but my father was against the girl-child education. He believed that sending a female to school will lead to unwanted pregnancy. This was what led to me selling fufu,” she shared.

She told PREMIUM TIMES she has been hawking fufu for several decades since she was a child.

Her earnings go to meeting her daily needs.

“The competitive fufu sale in Osogbo makes me wake up as early as 5 a.m. to start the mixing of raw cassava. I step out of my house by 10 a.m. every day and I won’t return until 5 p.m. due to the many distant locations I have to reach before making maximum sales,” she said.

At her home, Mrs Akanmu sleeps on a mat and has no electricity.

“I used to have a bed but it got burnt in a fire accident that happened over 10 years ago. And since then, I have been managing a hand-sewn cement-nylon as a mat,” she said.

When asked what she expects a good society to be, she said in Yoruba: “a good society should have good roads, regular power supply, employment opportunities, and most importantly, accessible education. I wish the government, just like Awolowo did in his days, will provide free education.”

She said her children graduated from the university but could not get jobs. One is now a carpenter while the other is a brick layer.

She has not received help since the police attack, but said she hoped the community will change for good.

Mrs Akanmu told PREMIUM TIMES that the brutalisation she got from police during last week’s protest would not stop her from identifying with the “oppressed”.

She vowed to participate in future protests if notified.