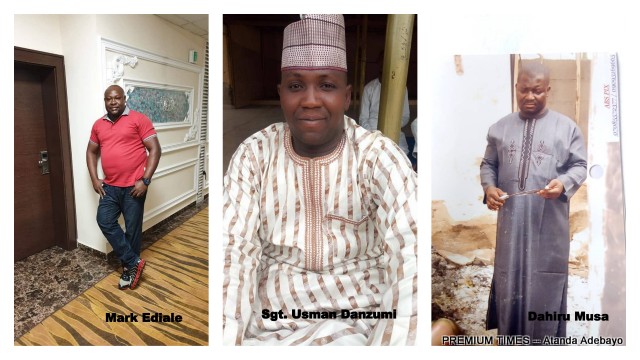 The Force Headquarters on Thursday paid an emotional tribute to the three officers killed by Nigerian soldiers while on an operation in Taraba State.

The inspector and two sergeants were amongst a team of crime-busting detectives who came under fire while transporting a suspected kidnap kingpin in a police bus on Tuesday evening.

Several other officers of the police team, which was led by an assistant police superintendent, were also injured in the gunfire.

On Thursday night, the police released the names of the officers that were fatally shot by soldiers and praised their record of courageous service to the nation.

The police spokesperson, Frank Mba, named the officers as Mark Ediale, an inspector from Edo State; Usman Danzumi and Dahiru Musa, both sergeants from Taraba State. They were all of the celebrated Intelligence Response Team (IRT).

“The gallant, outstanding IRT team attacked by soldiers in Taraba State consists of some of the most disciplined, proficient and hardworking police investigators in the service of the Nation.

“Until their untimely death in the hands of soldiers of 93 Battalion Takum, Taraba State, these officers have participated in several high profile and high risk arrests, rescue missions and investigative operations,” police said.

The officers took part in the arrest of Nigeria’s most famous kidnap suspect, ‘Evans.’

They also contributed to the arrest of 22 Boko Haram suspects blamed for the 2014 kidnapping of the Chibok School Girls in Borno State.

The were also a part of the team that arrested Abdulmalik Umar, a Boko Haram commander, and other suspected terrorists.

Inspector-General Muhammad Adamu has sent condolence messages to the families, friends and professional colleagues of the fallen heroes, reassuring them that their death will not be in vain.

“The IGP equally calls for calm among Nigerians as efforts are in top gear to unravel the mystery surrounding this bizarre crime,” Mr Mba added.

The army on Wednesday night said the officers were killed because they did not properly identify themselves and soldiers mistook them for kidnappers.

A joint investigative panel had been raised by the military and the police. But the police have continued pushing out strongly-worded accusations against the Nigerian Army.

What the weather would look like across Nigeria on Friday – NiMet