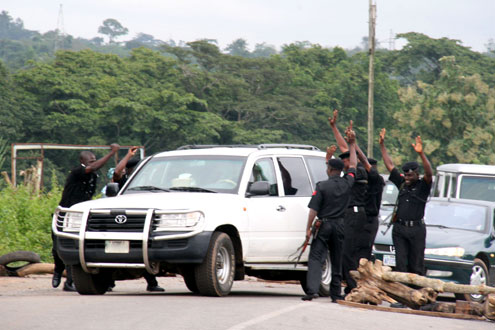 Gunmen on Monday shot dead a police inspector, identified as Lasisi, while he was on patrol duty along Isua-Ise Akoko Road in Akoko South East Local Government Area of Ondo State.

The attackers, whose identity was not known, emerged from a nearby bush and opened fire on policemen attached to Isua Divisional Police Station as they manned a checkpoint.

Police Public Relations Officer, Femi Joseph, confirmed the incident and said the men of the command were already on the trail of the hoodlums while an investigation into the matter had begun.

“Our men are already combing the bush and I want to assure you that they would be arrested very soon,” the police spokesperson said.

A source said the other policemen at the checkpoint managed to escape unhurt.

“The policemen were always on that road for the past one year to check the activities of the bandits in the area,” he said.

“But it was unfortunate today (Monday) that some hoodlums just came from nowhere and opened fire on the policemen at the checkpoint.

“While Mr Lasisi was killed other policemen at the checkpoint ran for their lives.”

The source also disclosed that after killing the policeman, the hoodlums went away with his gun.

The police source also said the remains of the deceased was deposited at the morgue of the Ipe Akoko General Hospital.