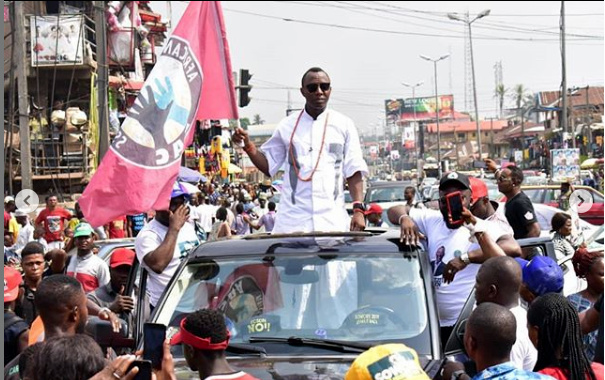 Security agents believed to be personnel of the State Security Service (SSS) have arrested Omoyele Sowore, the publisher of the news website, SaharaReporters.

The statement said, “Operatives of the Department of State Services have arrested pro-democracy activist and the convener of #RevolutionNow Protests, Omoyele Sowore.

“It was gathered that Sowore was picked up at his apartment in the early hours of Saturday.

“Sowore posted a distress tweet at exactly 1:25 am with an eyewitness confirming that his phone was forcefully taken from him.

“He also tweeted ” Ja p”, confirming his phone must have been seized while trying to raise the alarm about his arrest.

“His arrest and detention are not unconnected to #RevolutionNow, a series of planned protests against bad governance in Nigeria scheduled for August 5, 2019.

The publisher’s  lawyer, Inibehe Effiong, later posted on Facebook, “Mr Omoyele Sowore is currently in the custody of the SSS. His phones have been confiscated. This is a panic response from a decayed regime that is so sacred of its own shadow.

“Buhari’s despotism is now in full force. Nigerians are now preoccupied with the shenanigans of a morally bankrupt, economically backward and politically inept administration.

“The SSS which is supposed to be actively involved in curtailing insecurity across Nigeria has been turned into a tool of intimidation for a corrupt, clueless and incompetent government.

“Let it be known that this irresponsible and highly reckless action will not deter conscientious and enlightened Nigerians from fighting for a better country.

“The #RevolutionNow Movement has come to stay and no dictator can stop it.”

The SSS could not be reached for comments as at the time of publishing this post at 4:56 AM Saturday.

Mr Sowore was the presidential candidate of the African Action Congress (AAC) during the 2019 general elections.

He was also the leader of #Take It Back, a political movement which says it wants to rescue Nigeria from corruption and misgovernance.

Mr Sowore’s activism began while he was a student of geography at the University of Lagos. He later led the Student Union in that university.

After his youth service, the activist moved to New York for a graduate degree at Columbia University.

In 2005, he established SaharaReporters with which he has become a consistent thorn on the bodies of Nigerian authorities since then.

In 2018, he formally joined partisan politics, forming the African Action Congress on which platform he sought Nigeria’s number one office.

After he lost that election, Mr Sowore vowed to remain consistent in holding the Muhammadu Buhari government accountable.

NLC has no plan for protests