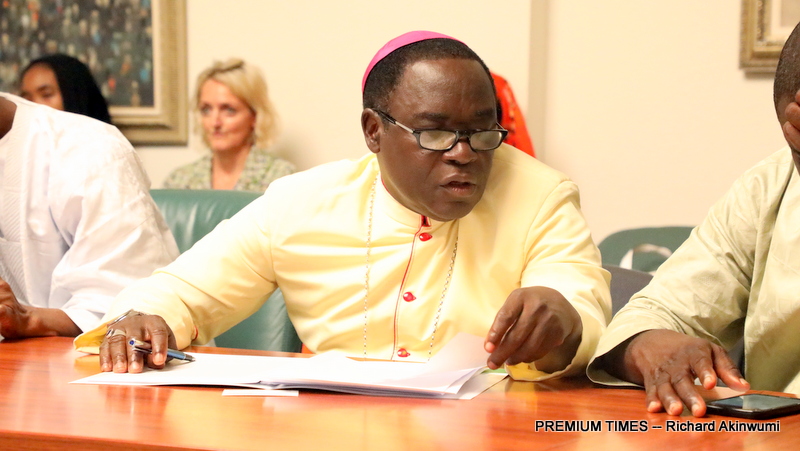 The Catholic bishop of Sokoto, Matthew Kukah, has warned against blanket demonisation of herdsmen, especially of the Fulani stock, warning that such actions could be preamble to a breakout of violent confrontation against the Fulani.

Mr Kukah spoke Tuesday at a colloquium on fake news and hate speech organised by the Olusegun Obasanjo Centre for African Studies, an arm of the National Open University of Nigeria (NOUN).

He said Nigerians “have to be very careful” before the situation degenerates beyond control.

He likened the uproar and profiling of the Fulani to what happened to the Igbo leading up to the Nigerian civil war between 1967 and 1970.

“If it is Fulani today, yesterday it was the Igbos,” he said.

Reacting to the recent controversy on the use of picture of a herdsman on the Nigerian passport booklet, Mr Kukah said he was almost swayed by the fake news, before he got a copy of the passport himself.

The cleric displayed his passport to illustrate the content and debunk the insinuations that it carried only a picture of a herdsman.

“When I look at my passport, it has the coat of arm and map of Nigeria. Then right in front of the data page where all my information is, I have the Bini. I am not a Bini man, but I am eminently proud of this. I didn’t even know it was here, because I had to go through the passport page by page.

“When I opened the passport the first thing I saw was Zuma Rock, then I see Tiv dancers. Who gave them permission to put Tiv dancers? Then I got to next page, before I came to this poor Fulani man who is standing with his cows.

Suddenly, this is the only thing we have chosen.

“Why is it exciting? It is exciting because this is the time for us to ‘hate’, literally tag every Fulani as a herdsman. We are on a very dangerous precipice,” he said.

Mr Kukah said it was time for those in the position of leadership to tame the situation.

“Those who lead us should better stand up and tell us where we are going,” he said.

The Catholic priest also urged Nigerians to be each other’s keeper and avoid ethno-religious profiling in dealing with each other.

To further tame the spread of hate, Mr Kukah called on media to sieve through in choosing who to give audience to avoid persons who propagate hate and mischief.

He lamented increase in hate speech in the polity which, he said, will not augur well for the society.

“What we see are labels over crimes. The moment you start talking about labels, you are breeding hate speech,” Mr Adamu said.

In her contribution, former journalist and politician, Chris Anyanwu, also bemoaned “too much of this hate and bile stuff” warning that it could consume the country if not properly tackled.

“We have to be careful not to use our own hands to set our own house on fire and someone will sit there in Russia laughing,” she said.

Ms Anyanwu, a former senator, said the media has a big role to play in reversing the trend, but lamented poor quality of journalism currently in the country.

She said the rise of “brown envelope” in journalism has bred poor attitude to work thus some reporters rely on press releases churned out by newsmakers.