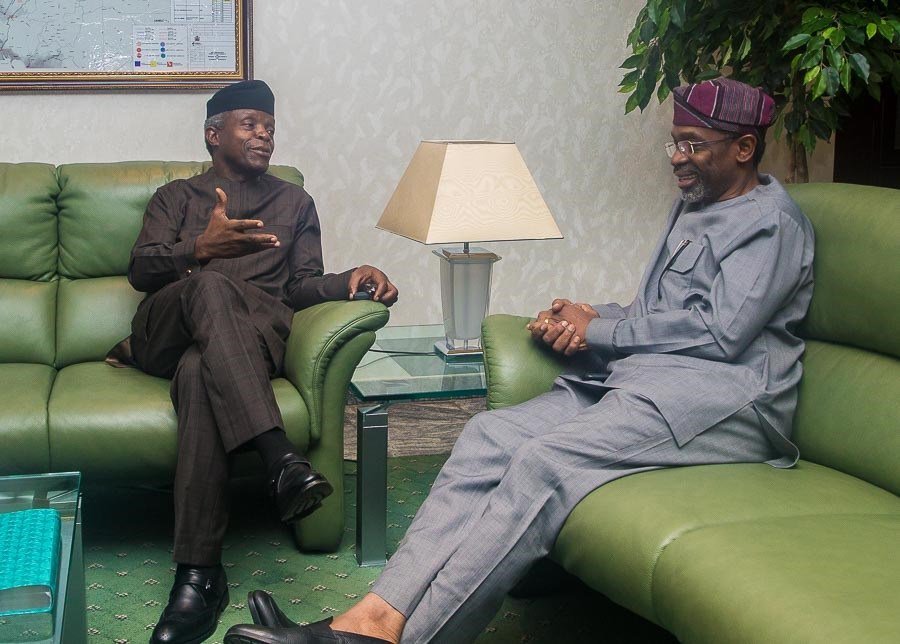 Vice President Yemi Osinbajo and the newly elected Speaker of the House of Representatives, Femi Gbajabiamila, on Monday held a closed door meeting at the Presidential Villa, Abuja.

The Speaker’s position contradicts that of the National Chairman of the All Progressives Congress (APC), Adams Oshiomhole, who in April vowed that members of the opposition will not head special and standing committees of the Senate and the House of Representatives.

Speaking at a dinner hosted by President Muhammadu Buhari for elected APC lawmakers, Mr Oshiomhole said the decision was because the APC had learnt from the ”mistake” of 2015 when members not loyal to the party were allowed to assume leadership positions in the National Assembly.

Mr Oshiomhole said the decision was sequel to the fact that most of those who decamped from the APC were rejected by Nigerians during the election and “even those who led it were uprooted by the Oto’ge movement in Kwara State.”

“We cannot as a party which has a comfortable majority, entrust critical committees in the hands of the PDP or opposition.

“If Nigerians wanted them, they could have voted them. In the days of PDP, every committee were chaired by PDP members,” he said.

Mr Gbajabiamila said the meeting with the vice president was all about moving the country forward.

He said the meeting centered on Nigeria and charting a roadmap on how to tackle the problems confronting the nation.

“Those were the issues we discussed; it was not a personal visit; but you can call it a hybrid between personal and official; but mostly official, addressing the issues of the problem.

“We discussed on how the executive and the legislature can collaborate to make life better for Nigeria and Nigerians.

“Committees will be unfolded in the next few weeks and you will see how we intend to carry the opposition along; I am not letting anything out of the bag but you can be sure that they will be carried along.

“It is going to be a reformed house; the reforms are going to be dished out piecemeal so as not to shut the system.

“But there will be reforms that will be for the benefit of the country. We see how it goes,’’ he said.

The speaker said members of the 9th Assembly expected the cooperation of all arms of government, including the executive, journalists and their constituents.

Mr Gbajabiamila, who was a frontline candidate of the All Progressives Congress defeated his rival, Umar Bago, to emerge the speaker of the 9th assembly