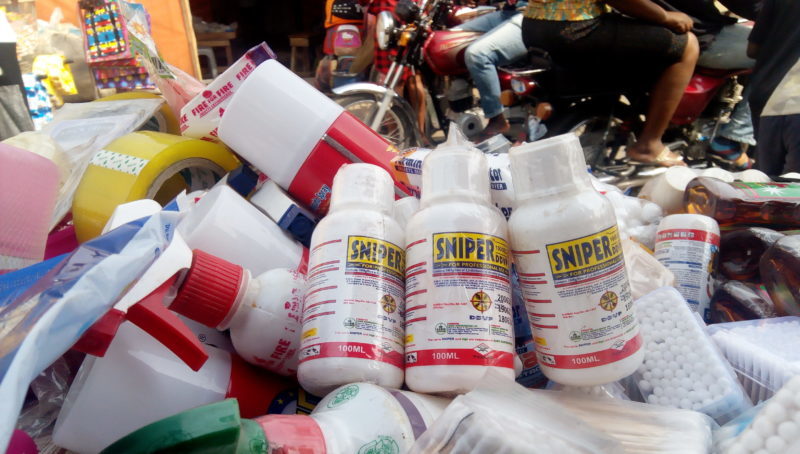 The Nigerian government may direct a change in the package of ‘Sniper’, an agro-chemical that has increasingly become a choice killer for persons contemplating suicide, an official said.

The National Agency for Food and Drug Administration and Control (NAFDAC) said it is partnering with other relevant bodies on this as part of plans to discourage the use of Sniper as a tool for suicide.

This is in response to calls for a check on the proliferation and ease of access to Sniper in markets and streets across the nation.

According to Vanguard Newspaper, the Director General of NAFDAC, Christiana Adeyeye, said Sniper containers “could now be made very difficult to open, or may be turned into a spray rather than the liquid contents it is known for.”

The suicide rate has increased in Nigeria with Sniper among the agents popularly used.

Notable among the reported incidents is that of a 400-level student of the Department of English and Literary Studies, University of Nigeria, Nsukka, Chukwuemeka Akachi.

There was another case of a pastor in a popular Pentecostal church who recently committed suicide after consuming the deadly substance.

That was before Ayomide and Ajani Damilola of the University of Lagos were reported to have killed themselves using the insecticide following the accusations that they stole clothes in their hostel.

Another 32-year-old banker and mother of two, identified as Peace, of Ughelli, Delta State, committed suicide over her husband’s alleged infidelity. She also took Sniper.

The ease of access to Sniper despite its wrong use has become a worry for many Nigerians.

Bottles of Sniper can be picked up easily on the streets as they are sold openly in the market.

The World Health Organisation (WHO) estimates that the method used for 20 per cent of global suicides was through pesticide self-poisoning and they mostly occur in developing countries.

Suicide victims appear to find gulping the liquid content of the agro-chemical inside a white container an easier route out.

But experts argue that it is easier to die by a bullet on the forehead than to face the agony that follows after drinking sniper.

Mrs Adeyeye also discouraged the use of Sniper and other agro-chemicals for the preservation of food as they contain substances harmful to the human body.

“We also decry poor handling of foods in Nigeria by producers and sellers, because the populace and consumers are being exposed unduly to health risks from contaminants.

“The use of unapproved insecticides such as Sniper for the preservation of grains by unauthorised persons, the use of containers contaminated with hazardous chemicals such as fertilizer bags for grains or chemical drums and jerry cans for food storage are classic examples of a common practice among the market men and women due to ignorance,” the NAFDAC chief said.

Why Nigerians use Sniper indoors

Sniper is a DDVP, 2,2-Dichlorovinyl dimethyl phosphate compound, marketed in Nigeria by Swiss-Nigerian Chemical Company, as a synthetic organophosphorus. Many Nigerians have, however, converted it to an indoor insecticide.

Sniper is predominantly used as an insecticide because of its effectiveness in killing insects better than well-established brands of insecticide.

The demand is also fuelled by its affordability. A 100ml of sniper goes for between N200 and N300 while its competitors cost as much as N750 for 100ml.

“However, Nigerians may be paying a heavier price with their health in the long term, if the trend is left unchecked”, a microbiologist, Fatima Ahmed, explained in a previous report by PREMIUM TIMES on sniper use.

“The instruction on Sniper says apply diluted portions to crops and there’s a ‘withdrawal’ time in which the crop should not be consumed so the active ingredient degrades to minimal level before consumption. Now compare this minute concentration to drinking from the original sniper bottle,” she noted in the report.

According to her, health experts have raised concerns over the indiscriminate use of Sniper pesticide in the control of mosquitoes, cockroaches and other household insects.

“They warned on its dangerous effects, especially to respiratory organs and even carcinogenic risks. A person may be exposed to the associated risk of Sniper through inhalation, absorption via the skin, ingestion, and eye contact.”