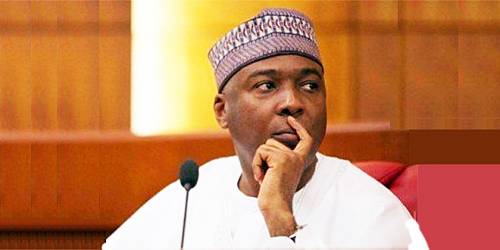 Nigeria’s immediate past Senate President, Bukola Saraki, has come under online attacks after being accused of taking ownership of a Twitter handle belonging to his former office.

The account @SPNigeria, verified by Twitter, was created in June 2015. It was created for the purpose of information dissemination from the office.

The move generated a backlash among Nigerians.

However, following comments from followers, the handle was later changed to @SP8thNGRSenate.

The new handle has all the contents earlier contained in the former handle archived in it.

This development instigated criticisms from Nigerians.

In a tweet, the special assistant to President Buhari on Digital/New Media, Tolu Ogunlesi, clamoured for a proper hand over of the handle.

“I’m confused – how can you personalize a verified account set up for the Office of the Senate President of Nigeria? The proper thing is to hand over @SPNigeria to new President and then convert the archived ABS page to @SPNigeria8thSenate or something similar,” he tweeted.

Also, a social commentator, Kayode Ogundamisi, berated the former Senate President for holding on to the handle.

“So it appears @bukolasaraki is not ready to release the official @Twitter handle @NGRSenate to the 9th Senate.

“Now we have to deal with a new handle @SPNigeria,” he tweeted via @ogundamisi.

The duo was replied by Olu Onemola, one of Mr Saraki’s aides who argued that it was important to preserve the digital record of the former Senate president.

He later tweeted that the Twitter handle @SPNigeria has been transferred to handlers of the new Senate president.

“The @SPNigeria created for the Office of the Senate President, has now been transferred to the new holders of the office. While the archived account which will not be tweeted from again or utilized in anyway will have the handle @SP8thNGRSenate.

“It is important to note that throughout this process I have been talking to people on the new Senate President’s Online team and we have had no issues. They are now managing the @SPNigeria handle.

“I take full responsibility for wanting to preserve the activities and achievements of @BukolaSaraki which were recorded on the handle in question. It was inline with practices adopted by other institutions during transition period,” he tweeted.

Few hours after Mr Onemola’s tweet came first tweets from the @SPNigeria after it was transferred to the new Senate President.

“@SPNigeria is now under the control of the office of the Senate President and fully active,” the account tweeted.

Even though the account has been transferred to the new Senate President, @SPNigeria will have to build from scratch.

A check by Friday noon showed that the account has only 6, 228 followers with 24 tweets since being handed over.

This is a far followership distance from the former account which followership and contents have now been transferred to Mr Saraki.

The @SP8thNGRSenate has over 218, 000 followers as at last check by Friday afternoon.

The account is considered a public property by Nigerians and as such they want it to remain a preserve of the office and not the occupier.

“Why change of handle?This is not mature. So you want to tell us if there was a website domain for the senate,so the website too will change; common . let’s stop all this and grow advance.The 9th senate should continue with the old handle . we all knew when they resume office,” a Twitter user Olasupo Tayo tweeted via @tayota_rapper.

He tweeted, “The decision to archive the @SPNigeria handle of the former Senate President was aimed at having a handle that preserved his official online activities and records for the public to view in the future.

“This does not in any way stop the current occupant of the Office from utilizing the @SPNigeria username. A notable example is: when Obama left office, the @POTUS account was transferred to the Trump team — while @POTUS44 was created as an archive of all Obama’s activities.”

Alleged $8.4m fraud: Ajudua swore with son’s life not to defraud me – Bamaiyi

Buhari felicitates with Abdulsalami Abubakar at 77