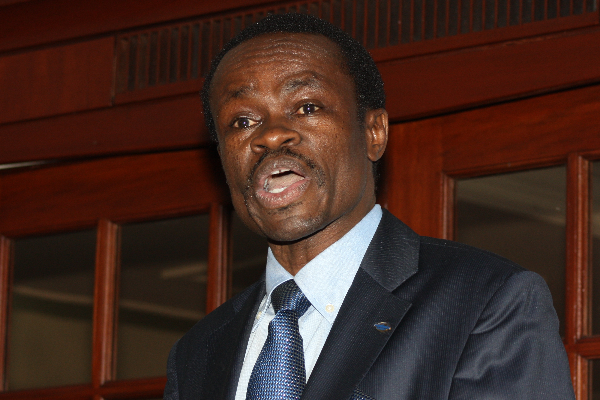 A former director of Kenya’s Anti Corruption Commission, Patrick Lumumba, says the fight against corruption in Nigeria is not achieving enough in the area of convictions.

The summit, themed “Curbing Electoral Spending: A panacea to Public Corruption”, held at the Congress Hall of Transcorp Hilton Hotel.

In attendance were guests from the diplomatic community and government, including the President of Rwanda, Paul Kagame; U.S Ambassador to Nigeria, Stuart Symington; Head of the EU Delegation to Nigeria and ECOWAS, Ketil Karlsen; Nigerian state governors and some of their predecessors; former ministers; military and paramilitary chiefs; among many others.

Mr Lumumba spoke after a presentation by the acting chairman of the EFCC, Ibrahim Magu.

In his presentation, Mr Magu said the commission has secured an estimated 1,207 convictions since under the President Buhari’s administration in 2015.

Mr Lumumba, who is widely regarded as an Anti-corruption evangelist, acknowledged the efforts of the EFCC but said the number of convictions is not sufficient.

”We are here gathered here in Abuja, Nigeria to remind ourselves that corruption, especially in the political arena, is dangerous for Africa and dangerous for any country.

”From the videos played on the screen that was played, we have seen monies recovered from individuals who are in other countries, but convictions are not sufficient,” Mr Lumumba said.

He said beyond the convictions, the government should also be “educating the populace and creating an environment where the children of darkness who are the perpetrators of corruption would not have the oxygen to breathe.”

Mr Lumumba said Africans have accepted the fact that corruption can undermine their democracy,

”And I say this because we now realise that corruption can undermine democracy, also realise that when we do not have schools, facilities, and when our young men and women are dying in the Sahara and in the Mediterranean sea is all because of corruption.

”Most important we now recognise that Africa cannot survive if corruption is what we embrace.”

He said corruption has invaded the electoral processes in Africa and especially in its political arena.

”It is not lost on me that conflicts normally emerge after our elections, and corruption has invaded our electoral process and competition in the political arena in many African countries is bad competition

”And therefore it is my hope this symposium would remind us that our future generations will only be safe if we wean ourselves from the menace of corruption.

”I am also glad that I am speaking in the presence of Paul Kagame. The presence of Mr Kagame stands out, some of his few detractors would not want to believe it.

”But he is among the few heads of states who are in the forefront in the fight against corruption. And if any doubts; you should visit Kigali, the cleanest city on the continent. Today Rwanda is the gold birth of how governance ought to be.”

“It is us who must morally inspect our hearts and ourselves,” he added.

How foreigners participated in corrupting Africa

The former Kenyan anti-corruption chief also took a swipe at countries which had kept mum on the scourge of corruption in Africa.

”To all our friends from distant lands; from the United States and other parts of Europe, for a long time, you have also been part of our problem,

”Because for a long time, our leaders from Africa would bring the money to your country and you asked no questions.

”I am glad you are beginning to ask questions and that is why we are agitating to recover our monies in millions.