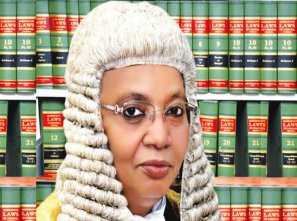 A new chairperson has been appointed to head the presidential election petition tribunal at the Court of Appeal in Abuja.

The new head, Mohammed Garba, a Court of Appeal judge, takes over from the court’s president, Zainab Bulkachuwa, who recused herself after the opposition party, PDP, said she was likely to be biased.

The Peoples Democratic Party and its presidential candidate, Atiku Abubakar, accused Mrs Bulkachuwa of having suspicious ties to the ruling APC.

Mrs Bulkachuwa’s husband is an APC senator-elect, who was elected under controversial circumstances.

The judge was also criticised for her comment at the inauguration of the tribunal, where she was quoted as saying elections disputes were bound to happen regardless of the credibility of the process.

After being pressured to step down, Mrs Bulkachuwa said she was leaving the post on “personal ground”.

Her replacement, Mr Garba, who hails from Zamfara State, was until his appointment to the Court of Appeal, the Chief Judge of the Zamfara State High Court.

The PDP and Mr Abubakar are challenging the victory of President Muhammadu Buhari of the APC in the February presidential election.

How Nigeria’s financial inclusion targets, SDGs have fared so far