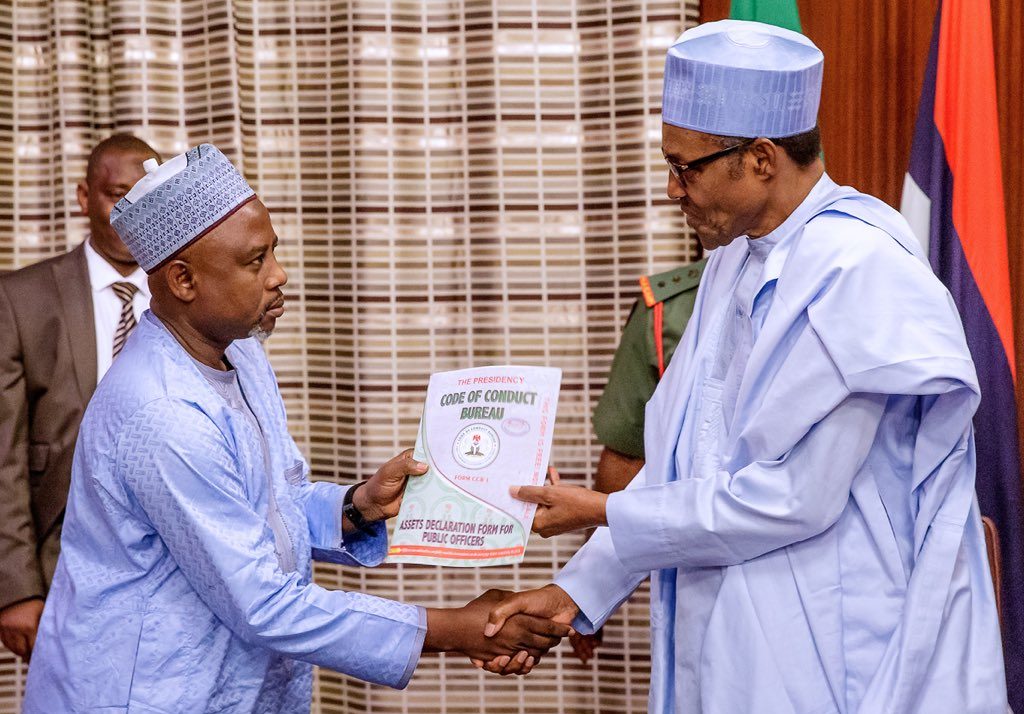 President Muhammadu Buhari has received a new set of Code of Conduct forms after winning reelection for a second term during the presidential election in February this year.

It is mandatory for elected and re-elected public officials in Nigeria to fill the forms providing details of all asset owned and acquired.

The new set of forms were presented to Mr Buhari on Monday in his office at the Presidential Villa by the board of directors of the Code of Conduct Bureau led by its chairman, Mohammed Isa.

Mr Buhari in a brief remark said he was pleased that he was meeting with the CCB board for the first time since their appointment.

“I have never met you before. I thank you for accepting to be in this very important institution and I thank you very much for serving me my forms which I must fill constitutionally before my second term of office.

“I think we cannot overemphasise the importance of your office because Nigerians are notorious for cutting shortcut in serving and accounting for public responsibilities and we are trying to impress our nation and the world that this administration is based on accountability.

“It is only institutions like yours that will bail us out from the efforts that we have been making to make sure that people in public office do not abuse that public office and that those who come in and those that are leaving in certain positions make sure that they hold the integrity of the office and of the country generally,” Mr Buhari said.

The president, who will be sworn in for the second term on Wednesday this week, said he will “quickly fill this form and dispatch it back to you so that at the end of 2023, I believe there are a lot of people that will like to take it back on me.

“So please, make sure you keep it safe because there are people who believed they shouldn’t be questioned which they are being questioned and some of them are already in trouble. I expect them to fight back and this is one of the instruments. So I hope you will keep it when I finish.”

Speaking earlier, Mr Isa thanked the president for appointing them to head the CCB.

He also congratulated Mr Buhari on his victory at the polls.

He said their mission at the villa was a constitutional requirement for all public officers based on paragraph 11 subsection 1 of part 1, Fifth Schedule.

“Mr President, it is in view of this that we found it pertinent to present ourselves and also present the forms to Mr President and the Vice President for an end of tenure and beginning of new tenure in office,” he said.

Those at the brief event included the Minister of Justice and Attorney-General of the Federation (AGF), Abubakar Malami, Chief of Staff to the President, Abba Kyari, and Special Adviser to the President on media and publicity, Femi Adesina.