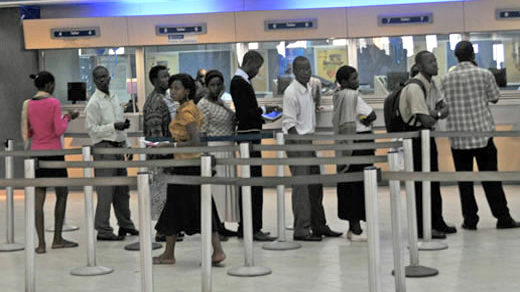 Why we don’t keep our monies in banks – Unbanked Nigerians

“I don’t have an account, and I can never have one till I die. My pocket and my car are secure enough for me, no matter how much I have,” an Abuja resident, Ibrahim Gombe, told PREMIUM TIMES.

Mr Gombe, who is into ‘different businesses’ including working as an estate agent, said after he gets his commission in cash from clients, he keeps his money in his car or at home.

“I am a very temperamental person. If I open an account and ATM ‘swallows’ my card or I have to queue to withdraw my own money, I might misbehave, so it’s better I stay on my own, I see no need to open an account at all,” he said.

Mr Gombe is like many more Nigerians who don’t see any value for them in the nation’s banking system.

While many low-income people like Mr Gombe, believe having a bank account is a sheer waste of time, others who would love to truly have an account have been constrained by the various requirements from the bank

According to a 2018 Access to Financial Services (A2F) survey conducted by Enhancing Financial Innovation and Access (EFInA), 36.6 million adult Nigerians out of the 99.6 million (36.8 per cent) total adult population are financially excluded, with 44.1 per cent being male and 55.9 per cent female.

As part of the plans to become one of the world’s largest economies, Nigeria introduced the National Financial Inclusion Strategy (NFIS) in 2012 as a key operator to achieve this.

The goal of the strategy is to increase the number of Nigerians with access to financial services from 30 per cent to 80 per cent by 2020.

Opening a savings account in some of these banks has been categorised into three tiers.

To open this account, all that is required is a passport photograph. But the highest that can be in this account at a time varies from N200,000 to N300, 000, depending on the bank.

Once the deposit in the tier1 account exceeds the stated amount, the account becomes inaccessible to the owner as it automatically becomes a tier 2 or tier 3 account.

For this, a valid identity card is needed and also utility bills.

The issue of financial inclusion is pertinent more in the northern part of the country, where the rate of financial exclusion doubles that of the southern parts.

According to the survey, while the North-west and North-east have 62 per cent and 85 per cent financially excluded adults respectively, the South-west has 19 per cent, and the South-south, South-east and North-central recorded exclusion rates of 23, 29 and 31 per cent respectively.

Some traders, like Hassan Aliyu, prefer to send money to their families through drivers or anyone that visits them from the village, just like decades ago.

Mr Aliyu, an orange trader in Abuja’s largest marker, Wuse, said, “I prefer to send money to my family in Katsina through a driver who comes from my village, or the driver gives them the money while I pay him once he gets to Abuja.”

Isiaka Kazeem, who sells pepper also in Wuse market, said he would have loved to open an account ”but he doesn’t trust the banks with their initial requirements.”

“They will tell you to open with just a passport photograph until you want to withdraw your money, they will then tell you to bring all sorts of things to access your own money.”

For Taura Ibrahim, a gateman in a private residence in Wuse part of Abuja, he was discouraged by what he considers bank requirements.

“I would have loved to open an account but for the various requirements I cannot meet, my house does not have a meter, so I have no utility bill.”

Similarly, another trader in Wuse market, Dahir Yusufu, said: “I went to the bank to open an account a long time ago. The list of their requirements discouraged me from going back there.”

Mr Yusuf said since then he has decided ”to be keeping his money like his colleagues.”

The complaints of people like Mr Yusuf continue despite a 2013 intervention by the Central Bank of Nigeria (CBN). The bank, in 2013, introduced the tiered Know-Your-Customer (KYC) framework to simplify the requirements for opening and operating bank and mobile money accounts for low-income earners.