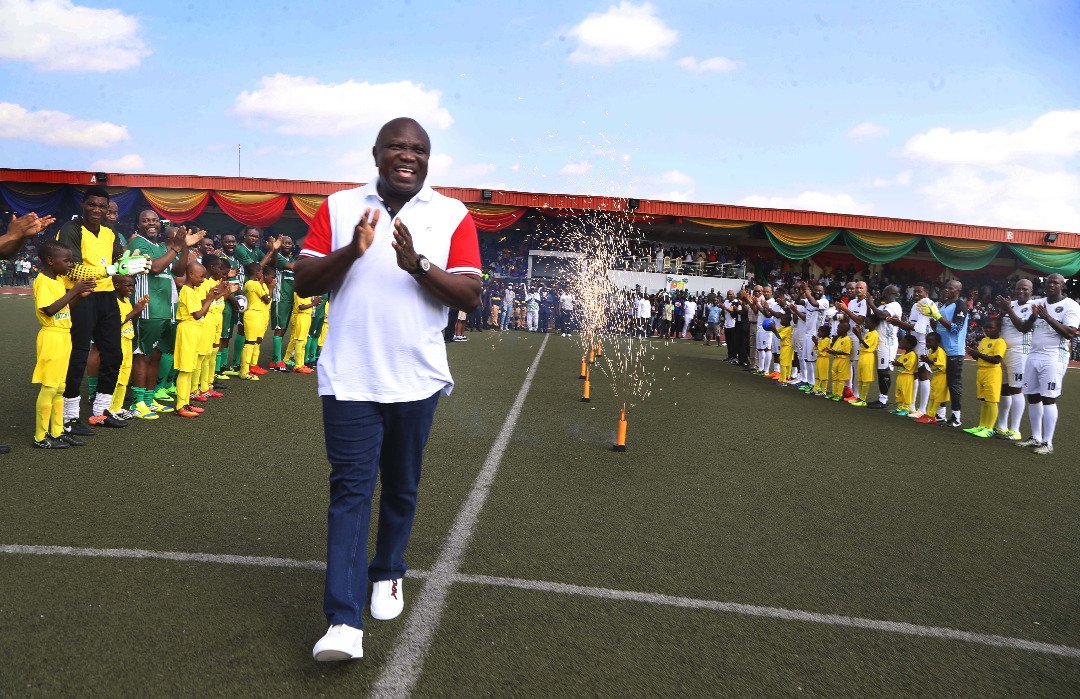 Football legends from Nigeria and other African countries converged today at the Agege Stadium to play a testimonial football match in my honour; to mark the end of my tenure as the Governor of Lagos State. [Photo: @AkinwunmiAmbode]

The Agege Stadium in Lagos buzzed with excitement on Saturday as top African and Nigerian football legends honoured the Lagos State Governor, Akinwunmi Ambode, with a testimonial match as he gets set to exit office.

Watched by a capacity crowd that thronged the Agege Stadium, Kanu Nwankwo opened the scoring in the first half before Titi Kamara drew the African legends level within a space of two minutes. A foul in the penalty box by Taribo West on El Hadji Diouf was converted by Titi Kamara which put the African stars 3-1 at half time.

In the second half, Garba Lawal fired in a free kick from the edge of the 18-yard to half the deficit for the Nigerian Legends. But a cheeky penalty from El Hadji Diouf put the African legends 4-2 up.

With the game heading for its final minutes, Obafemi Martins charged through the defence of the African Legends and scored a rebound with a header, while a stoppage-time goal by comedian AY ensured both teams shared the spoils, with the game finishing in a thrilling 4-4 draw.

Before the game, Governor Ambode was given a guard of honour by both teams as he walked through with fireworks display before he was given the honour of performing the official kick-off for the match.

Earlier, there was a novelty match between an U-15 side from Lagos and their counterpart from Kebbi State, with the visitors running away with a 5-0 victory.

Governor Ambode was also inducted into the Hall of Fame by the Nigeria Supporters Club (NSC) for his unwavering support towards sports development and especially football in Nigeria.

The president of the NSC, Rafiu Ladipo, while presenting the award to the governor said he would forever be remembered for his giant strides in sports development especially in the State.

The event was also spiced up by music performances by top Nigerian artistes, including 2Baba, Small Doctor, among others.

Speaking to journalists after the match, Victor Ikpeba said Governor Ambode deserved to be commended and appreciated for what he had done for Lagos, saying that he would be greatly missed.

“It’s (been) a long time that we witnessed the fans come out in numbers for this kind of game and it just shows that the fans still appreciate their former greats in African football,” he said.

“It’s great for Lagos State today; we are all excited. It’s not about the result, but just coming together to have this fantastic game. Credit to Ambode; we are going to miss him. We wish him all the best in life in the future.”

Also in a letter addressed to the governor, four times African Footballer of the Year, Samuel Eto’o, expressed regrets for his inability to participate in the match, saying that he was glad to have been invited as he holds the governor in high esteem.

“I hold you in high esteem, the love and support I get from Nigerian football lovers and fans in Nigeria at large. It would have been a pleasure attending this celebration. I love you Governor Ambode, I believe the event will be a success and I give you my warmest regards,” he said.