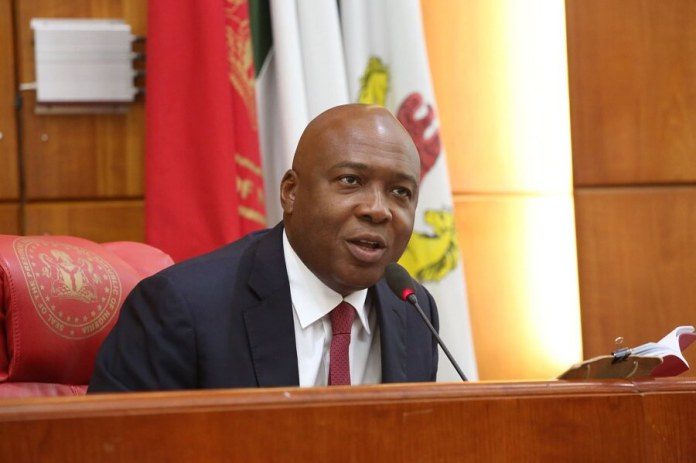 Senate President Bukola Saraki has described recent moves by the Economic and Financial Crimes Commission (EFCC) to probe him as politically motivated and a witch-hunt.

Mr Saraki said the anti-graft agency was only investigating matters that were already settled.

The Senate President was reacting to fresh moves by EFCC to probe his earnings as Kwara State Governor, a position he held from 2003 to 2011.

In a letter to the Kwara State Government, the EFCC demanded a breakdown of Mr Saraki’s income, as well as his entitlements as governor of the state.

The anti-graft agency is investigating Mr Saraki for an alleged case of conspiracy, abuse of office, misappropriation of public funds, theft, and money-laundering.

On Monday, the EFCC in a statement, said the current probe of Mr Saraki was not in connection to his recent appointment as International Human Rights Commission (IHRC) ambassador, as reported by some media houses.

In a statement signed by Yusuph Olaniyonu, his media aide, Mr Saraki said the latest move by EFCC is “less than noble and a mere witch-hunt exercise, aimed at settling scores, laced with malicious and partisan motives.”

The statement, released on Tuesday, noted that the tenure of Mr Saraki as Kwara State governor, had been investigated and the new exercise was only a repetition.

“At this point, we need to remind members of the public that Dr Saraki’s tenure as Kwara State Governor has been investigated several times since his last months in office in 2010 till date. In fact, at a point, as incumbent governor, he voluntarily waived his immunity and submitted to investigation and yet nothing was found against him.

“Also, members of the public should be reminded that during the proceedings of his trial at the Code of Conduct Tribunal (CCT) between 2015 and 2018, it became clear that the evidence relied upon was from investigations conducted by the EFCC on his tenure as governor and that is why the lead witness for the prosecution was an EFCC agent, Michael Wetkas. Yet, the CCT in its judgement dismissed the 16 charges filed against Dr Saraki and that verdict was upheld by the highest court of the land, the Supreme Court.

“This new investigation into his activities as governor of Kwara State is a repeat performance. The EFCC is fishing for evidence that they did not get in the past investigations which has spanned almost nine years. However, we need to remind the commission that Dr Saraki is not an outgoing governor. Since 2011, tens of governors have been in and out of our various State Houses. Likewise, hundreds of senators and representatives have been in and out of the National Assembly. To single out one individual for persistent investigation can only be logically and plausibly interpreted to be a witch-hunt. This is definitely no fight against corruption. It is a battle waged against a ‘political enemy’. It is a ‘label to damage’ plot.”

The statement noted that the EFCC wrote the Clerk of the Senate to demand documents including: “the Certified True Copies of the following: i) All Cash Books, Payment Vouchers, Contract Award Letters, Evidence of Contract Bidding, Agreement and Certificate of Contract Completion from 2015 to date. ii) Certified True Copies of all Financial Retirement made within the same period. iii) Any other information that may assist the Commission in its investigation”.

Mr Saraki said that the documents requested are handled by the bureaucracy of the National Assembly and has nothing to do with him.

He added that his actions on the non-confirmation of Ibrahim Magu as EFCC chairman was borne out of public interest and not personal grievances.

“Some people who have called Dr Saraki about the EFCC statement have wondered whether this is the commission’s way of settling scores by blaming the non-confirmation of its acting chairman, Mr Ibrahim Magu, on the leadership of the Senate. For those who reason in this direction, our response has always been that the decision not to clear Magu was not a personal issue between both men. It was an institutional decision which was taken on a day that the public freely follows the proceedings through live coverage on television. This was done to avoid accusations that some people seized the process to deliberately deny Mr Magu fair hearing.”

Mr Saraki said his tenures as Kwara governor and in the Senate, were run with transparency and accountability.

The Senate President also made particular reference to a report by EFCC which gave Kwara State under his tenure ‘a clean bill of health’, alongside five other states.

He boasted of taking necessary legislative measures to reduce corruption during his tenure as Senate President.

“It is to the credit of the Senate President and his colleagues in the Eighth National Assembly that there has not been any case of bribery scandal or misappropriation in the procurement process.

“While we do not wish to obstruct the EFCC in the performance of its tasks, we reiterate our position that the cIs
ommission should be professional, ethical, transparent and consistent. It cannot be deemed professional when the agency is not consistent in the application of its rules and the laws to all cases and individuals.

“The recent onslaught against the Senate President by the anti-graft agency is definitely a case of different laws for different folks,” the statement added.