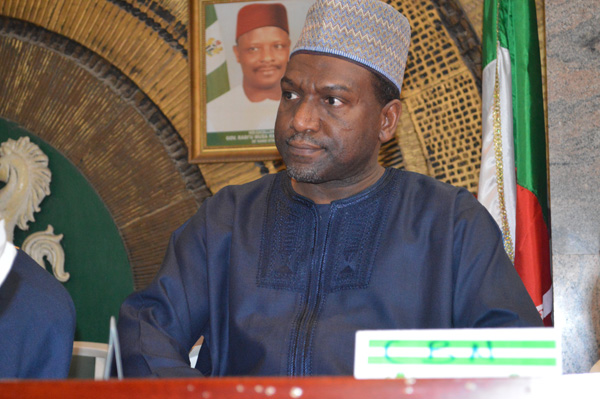 An Italian contractor, Marco Zoccoli, has threatened to drag his country into a dispute with a Nigerian businessman, Sani Dangote.

Mr Zoccoli is accusing Mr Dangote of betrayal of trust, rights infringement, and breach of contract.

The development is coming four years after both men entered into a business partnership.

Mr Dangote, a relative of Africa’s richest man and billionaire Aliko Dangote, is the owner of Dansa Agro-allied Limited, MPS Nigeria Limited, and vice president of the Dangote group.

The Italian also accused Mr Dangote and his company of abusing his fundamental rights by withholding his passport for over two years and threatening to throw him out of Nigeria without full payment for a three-year contract between both parties signed in September 2014.

Mr Zoccoli, who was first introduced to PREMIUM TIMES by his wife, Ijeoma, spoke to this newspaper in an exclusive interview. His wife acted as translator.

According to his accounts, Mr Zoccoli joined Mr Dangote’s company after the Nigerian businessman expressed interest in working with him.

“I was working in a company, Woodmill, when I met Alhaji Sani Dangote. He invited me over to his office in Lagos and we discussed the proposed contract. After we agreed on the terms of the contracts, I was made to move to Calabar. The contract was for three years, September 2014 to October 2017.

“His company, MPS Limited, was involved in the production of timber and they were having issues because, in Calabar, you can only sell finished wooden products. So he approached me to help with the production of wooden doors for the Nigerian market.

He said Mr Dangote promised to match the salary in his previous employment with the one he was to be paid in the contract. According to Mr Zoccoli, the Nigerian businessman also promised to increase his salary over time.

However, a few months into his employment Mr Zoccoli said he noticed a disturbing development that attracted several changes in the terms of his contract and personal life.

“According to the terms of my contract, I was employed by a company known as MPS Nigeria Limited. However, I was given a work permit which appeared as though I was employed by Dansa Agro Allied Limited,” Mr Zoccoli told PREMIUM TIMES.

“MPS deals with the production of timber and Dansa Agro Allied deals on plantation. I worked as Managing Director of a branch of the MPS for Mr Dangote’s organisation. I also did the concrete work foundation for the installations during the time before the machines for my work was brought,” Mr Zoccoli added.

According to Mr Zoccoli, Mr Dangote’s company went back on its plan to install some important machines after purchasing the same through the Italian, for over a year.

“I brought the machines to Nigeria in January 2015. But rather than move them from the port in Lagos to Calabar, the company left them at the port till 2016.

“Not only did they abandon the machines, but they also left them under the heat of the sun and the rain,” Mr Zoccoli said.

When the company eventually decided to install the machine, following threats by Mr Zoccoli to resign from the contracts, the Italian said, a majority of the workers had embarked on industrial action because the company had a reputation for owing its workers.

Consequently, Mr Zoccoli said, he was forced to join in offloading the machines with three other staff and ended up with a complication in his spine.

“Something happened. I was trying to move away from a coming object when I was hit by another. I went home and massaged the place with balm and hot water, thinking it was mild. But the following day, I could not move. I was taken to the hospital and told that five of my vertebral disc had dislocated,” Mr Zoccoli said.

Despite the health challenge, Mr Zoccoli said he continued the work after his treatment at a Lagos teaching hospital which was partly funded by Mr Dangote’s company.

“During this time, my salary had stockpiled. They would pay me for one month and fail to pay for the next two months. They had also been paying me 50 per cent of the agreed salary, but I told them I would no longer take 50 per cent,” he said.

Mr Zoccoli said he agreed to be paid half because the company had suggested that it would start making the full payment when the installation was completed.

Also, Mr Zoccoli explained that the company collected his passport to help him renew it when it was due in 2015. However, the Italian contractor added that Mr Dangote’s company refused to return the passport under the guise of maintaining a company policy, Mr Zoccoli said.

He also alleged that the promise for full payment of his salary was not fulfilled by Mr Dangote’s MPS Limited. Mr Zoccoli added that weeks after completing the three-year contract, Mr Dangote’s company asked him to either renew the contract or be prepared to return to Egypt.

“They also made very stringent conditions in the document for renewal of contracts. They slashed my salary and said I would no longer be entitled to an official car, among other things,” he said.

Mr Zoccoli said he reacted to the seeming threats by reporting the matter to the Italian embassy and the Nigerian Police Force. That action resulted in a lawsuit instituted by the police against the company. The lawsuit was, however, frustrated by poor prosecution and consequently discharged in August 2018.

“The prosecution evidence is inconsistent as to the timing of the alleged seizure. Furthermore, there are inconsistencies on the timing of Macro’s employment with the second accused person,” said the Port Harcourt Division of the magistrate court, where the case was heard.

Although Mr Zoccoli’s international passport was later returned to him in October 2018 following intervention by the Nigerian immigration authorities and the court, Mr Zoccoli said he has not been paid 19 months’ salary, despite repeated requests for the payment.

The Italian contractor said he was disappointed by the actions of Mr Dangote and his company and may involve his country if efforts to amicably resolve the issue fail in Nigeria.

“If things continue like this, I may have to involve my country,” Mr Zoccoli said.

When PREMIUM contacted a human resource official at the company simply identified as Liyatu, she denied knowledge of the matter.

“I just want you to know that those people are telling lies. That case was taken to court and struck out,” the caller who refused to identify himself said in a telephone interview with PREMIUM TIMES.

Efforts by this newspaper to contact the head of communication, Dangote Group, Anthony Chiejina, failed.

Mr Chiejina did not respond to calls or text messages sent to his phone line, regarding the matter.

Also, this newspaper contacted Dansa Agro Allied’s office in Lagos but did not get a further response to the allegations by Mr Zoccoli.