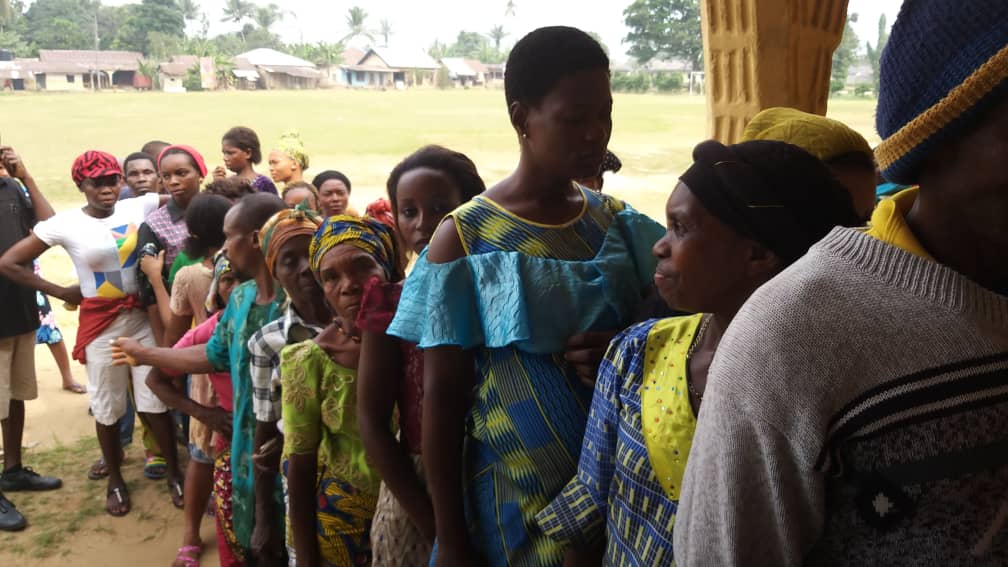 10.22a.m Polling Unit 013, Ward 4, Ibiono Ibom Western, accreditation and voting is about to commence. Voters are lining up, ready to cast their vote.

As Nigerians prepared last year for the ongoing general elections, some political leaders mooted the idea of forming a political party that presents the voters an alternative to the two establishment parties, the ruling All Progressives (APC) and the main opposition Peoples Democratic Party (PDP).

Former President Olusegun Obasanjo was one of those involved in the initiative after President Muhammadu Buhari ignored his advice not to seek reelection.

Mr Obasanjo, who in the run-up to the 2015 elections publicly tore his membership card of the PDP, also said he would not return to the party. Instead, he would rally the newbreed politicians into a “Third Force” to challenge the APC and PDP at this year’s election.

But Mr Obasanjo soon abandoned the project and endorsed the candidature of his estranged former deputy, Atiku Abubakar, after the latter won the presidential primary of the PDP in Port Harcourt, Rivers State.

But an unusual suspect on Saturday emerged the “Third Force” from the presidential elections, as it was credited with the highest number of votes after the APC and PDP.

From the result of the poll announced by the Independent National Electoral Commission (INEC), the total number of invalid votes recorded nationwide is also higher than the total votes cast in each of 33 states and the Federal Capital Territory.

With 1,289,607 votes out of the 28,614,190 total votes cast at the poll officially declared invalid, PREMIUM TIMES spoke with stakeholders on the reasons and implications of the invalidation of such a large number of votes.

The APC won the election with 15,191,847 votes, while the PDP emerged runner up with 11,262,978 votes. The other 71 parties polled only three percent of the total votes cast in the election, their combined total way below the total of invalid votes.

It is, therefore, safe to say invalid votes emerged from the poll as the third largest political party in Nigeria.

The increasing number of invalid votes in the Nigerian election has become a source of worry to many stakeholders in the country.

A large number of invalid votes has been recorded in almost all the recent elections in Nigeria.

In the 2019 presidential election, the margin of victory was about 3.9 million votes and higher than the number of invalid votes. It is the reason that INEC did not call for a rerun. But in a tight race, the invalid votes would have been enough to determine the outcome.

The Director, Centre for Democracy and Development (CDD), Idayat Hassan, and Samson Itodo, the Director of YIAGA Africa, attributed the high incidence of voided or invalid votes to inadequate voter education in Nigeria.

They urged government, the electoral commission and political parties to do more enlightenment campaigns for voters on the voting process.

They also want the size of the ballot papers increased to enable voters thumbprint properly in their preferred party’s box.

“For the fact that anyone can be a candidate doesn’t mean all the parties should get to the ballot paper,” he said. “Parties that are weak in terms of institutions and don’t even comply with the rules of their own party should be excluded.”

Before this cycle of elections, the National Orientation Agency took sensitisation campaigns to the 774 local government areas of the country to enlighten voters on how they can exercise their franchise by voting correctly.

Also, the Independent National Electoral Commission (INEC) and even media houses ran jingles and lectures to educate voters. But it would appear that these efforts did not reach a large audience.