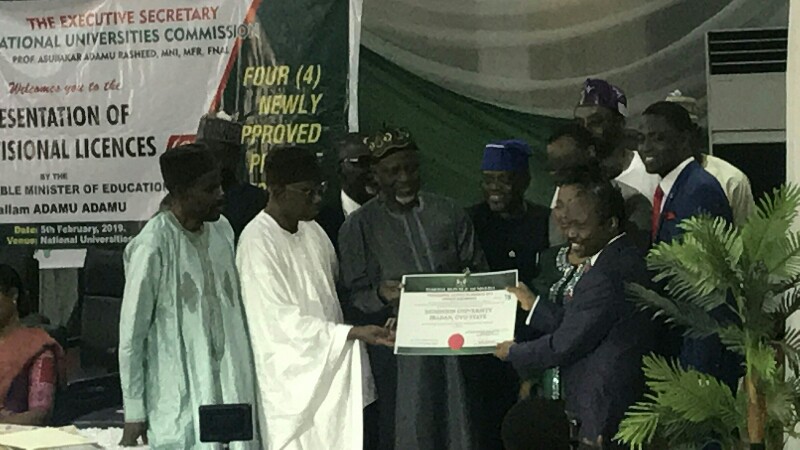 The Executive Secretary NUC, Abubakar Rasheed, the registrar JAMB, Ishaq Oloyede presenting the license to the Proprietors of Dominion University.

The Federal Executive Council gave approval for the new private universities in January.

On Tuesday, the Minister of Education, Adamu Adamu, presented the licences at the NUC headquarters in Abuja.

“For the avoidance of doubt, the provisional approval for the four universities to operate is intended to create room for effective mentoring and qualitative growth within the first three years of operation,” Mr Adamu said.

“During the probationary period, the four universities will be attached to older generation federal universities for academic and administrative mentoring to be moderated by NUC.”

The minister, who was represented by the Registrar of the Joint Admissions Matriculation Board, Ishaq Oloyede, said substantive licences would only be issued to the universities if they are adjudged as being well-governed after three years of probation.

The minister urged the proprietors of the universities to ensure that admission of students is carried out through JAMB.

“It is also advised that upon commencement of academic activities, the proprietor should sustain funding towards improving the infrastructure, equipment for teaching, learning and research as well as human resources,” he said.

The executive secretary of NUC, Abubakar Rasheed, said the four universities had gone through stringent assessment leading to the final approval by the Federal Executive Council.

According to him, the four universities being presented licence today have been under scrutiny since 2002.

Mr Rasheed said the present numbers of universities in Nigeria is inadequate to meet with the nation’s annual demand for access to university education, considering the increasing population of the country.

“However, the commission is not ready to sacrifice access on the altar of quality and that is why we will keep on beaming our searchlight on the governance of your private universities to ensure adherence to best practices in support of quality university education delivery,” he said.

He said there are procedures to take before opening a university. About fourteen steps must be taken, he said.

He said the commission has over 200 applications to process for new private universities in the country.

“In the last one or two years, we have been trying to make the steps easier without compromising more stringent steps required,” he said.

Speaking with PREMIUM TIMES, the chairman, Board of Trustees of Trinity University, Samuel Olatunji, said the institution intends to define education into a very valuable transformative tool in order to resolve the increasing challenges of the sector.

“Our focus will be to ensure that we get rid of the challenges and we will ensure that culture attributes must be part of our learning because character is major in life,” he said.

REQUIREMENTS FOR THE ESTABLISHMENT OF A PRIVATE UNIVERSITY IN NIGERIA

Interview of Promoters to Ascertain their Seriousness (Step 2)

Collection of Application Forms (Step 3)
Following due consideration of the application in writing, individuals or corporate bodies seeking to establish a private university are expected to send a representative to come to the Commission with the prescribed payment to collect a set of ten (10) application forms in person. Upon collection of the forms, copies of guidelines and other requirements are also given for proper guidance. Other clarifications are also sought and given as appropriate.
Submission of Application Forms and Relevant Documents (Step 4)
The completed application forms are forwarded with a non-refundable processing fee in Bank Draft addressed to NUC along with one or more of the following documents, if ready:
* Draft Academic Brief;

* Certificate of Incorporation/Registration of Proprietors (accompanied with Articles and Memorandum of Association);

* Deed of Assignment/Certificate of Occupancy;

* Letter of Available Liquid Cash; and

* Bank Guarantee of Funds to the tune of N200 Million from a reputable Bank.

It is usually advised that the last two documents should not be procured by the applicant until processing of the application has reached an advanced stage. Submission should also be at the instance of the Directorate of Establishment of Private Universities (DEPU).

Interactive Meeting of DEPU with the proposed university (Step 5)

Normally, DEPU invites the members of the Planning & Implementation Committee of the proposed university to NUC for an interactive meeting as a prelude to the first verification visit to its campus site. During the meeting, the process of documentation and other matters bordering on university governance are discussed and many grey areas are resolved. The meeting also affords the proposed university the opportunity to interact with the Executive Secretary/Chief Executive of NUC and his Management team for words of advice and encouragement. Also, a seminar presentation is delivered to avail the prospective Proprietors of the basic philosophy of universities and their societal roles.
Completion of Submission of Outstanding relevant documents (Step 6)

The Proprietors of the private Universities who had submitted part of the relevant documents are expected to make full submissions at this stage. The relevant documents include the draft Academic Briefs, draft Masterplan and the draft University Law.
Intensive Review/Analysis of Documents by experts in Relevant NUC Departments (Step 7)

First Verification Visit (Step 8)
DEPU undertakes a verification visit to the proposed university to review their documents with them on a one-on-one basis and to assess the level of preparedness in terms of documentation. During this visit, inspection of physical facilities is also undertaken to ascertain their adequacy for the proposed Colleges for the first phase. In addition, courtesy calls are paid to the government establishments that provide infrastructural facilities such as electricity, water and telecommunication including the traditional rulers and local government headquarters of where the proposed university is located. These visits are undertaken to solicit the support of the host community for the proposed university and also let them know that a university is being proposed in that area. This visit is considered very important as it reveals whether the Proprietor is committed to the project and is a prerequisite to the final verification visit.

Revision of Documentation by Proprietors based on Report by DEPU of NUC (Step 9)
Following the first visit, the proposed university is expected to revise its documents and undertake the modifications of its facilities to reflect the prescriptions given during the visit. The revised documents are forwarded to NUC for assessment of compliance. If found that progress has been made in that direction, the second (final) verification visit is scheduled to the proposed university.

Second Verification Visit (Step 10)
This is expected to be the final visit to the proposed university, depending on the level of compliance with the given prescriptions. As a result, the documents are reviewed along with the Planning & Implementation Committee with a view to perfecting them to bring them to an acceptable level. The evidence of available liquid cash documents is inspected and analyzed by the financial expert on the Committee. The Bank Guarantee of Fund to the tune of N200 million will also be sighted along with other legal documents for eventual submission to NUC. Final inspection of physical facilities is also carried out to ascertain whether they are in consonance with the approved NUC norms.

Security Screening of Proprietors and Board of Trustees (Step 11)
The purpose of screening the proprietor (Promoter) and members of Board of Trustees of the proposed universities is to enable the Government to ascertain the credibility of those who are sponsoring the university project and to ensure that they are not persons of questionable character.

Approval By NUC Management (Step 12)
DEPU, on return to NUC from the final verification visit, writes a comprehensive report with scores to the NUC Management for its consideration and further necessary action.

Approval By NUC Board (Step 13)
The NUC Management, upon receipt of DEPU report on the proposed university, considers and makes appropriate recommendation to the University Development Committee (UDC) of the NUC Board for its consideration after which the latter submits it to the Board for ratification. The Board, thereafter, forwards its recommendation to the Federal Government through the Honourable Minister of Education for its consideration and approval.

Trump to focus on immigration in State of the Union