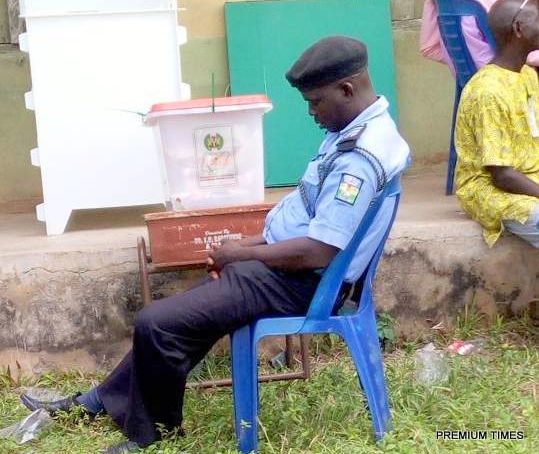 Security personnel on duty during elections

The Civil Society Legislative Advocacy Centre (CISLAC) and Transparency International -(DSP) on Wednesday expressed concerns over the roles of security agencies in the Nigerian general election.

They recommended measures that would make the agencies neutral during the elections.

The groups made the call in Abuja at the launch of a document titled “Preliminary Report Findings On the Involvement of Nigerian Security Services in the Electoral Process: Guardian or Threat to Democracy?”

The Director of CISLAC, Auwal Musa, expressed worry over the role of security agencies in past elections.

“I must express unreserved worry over the unhealthy role security agencies have played in recent past as it affects elections since the return to democracy in 1999,” he said.

He said while it is important to note that the role of security agencies are essential in the process of election, “the abusive deployment of security personnel to intimidate perceived oppositions gives a perception of insecurity.”

He, however, commended them where they had diligently carried out their duties “without fear or favour.”

He encouraged all relevant security authorities to prevent breaches of fundamental human rights while also helping to protect and preserve democracy.

“The report also shows how security agencies have also participated in snatching ballot boxes and, of course, supporting politician to engage in some kinds of unorthodox practices.”

He said the trend is worrisome and expressed hope that something would be done to arrest the situation before it becomes “a little of more concern to the international community.”

References were made to the case of Ekiti State in 2014, in which the report showed how security agencies became active participants “and actually manipulated the process and nothing was done about it.”

It also revealed the risk of the involvement of security agencies in the electoral process. It said the involvement weakens the efficacy of the police, “while downgrading the military, in particular, to a police force, a job they are not trained to perform.

“Overall, it will compromise their professional credibility and deepen partisanship within their ranks,” Mr Hashim said.

“Pumping money into solving security challenges may have the undesired effect of sustaining insecurity, not to mention that a mere minority in the society benefits from such spending at the expense of the majority. The same massive spending ends up fuelling corruption as these funds get diverted to private pockets.

“The electorate would, in the long run, become socialised to an atmosphere of insecurity during elections that when there is no need for it, as in the post-2015 experience, they try to create it.

“There is also the possibility of engendering weak public confidence in security agencies and the political process.”

The report made recommendations on how to protect the professional integrity of the security agencies during elections.

Some of the recommendations are:

“The use of para-military organisations and security services, beyond the Police, in the electoral process is unnecessary as instances of pre-election tension do not always translate to crisis on election day.

“Elections should be treated as any ordinary exercise Nigerians engage with and efforts made to de-prioritize it above other civic activities. Therefore, the responsibility of providing security and safety should be a daily priority that should not be given any undue attention during elections.

“In the interim, if the Nigerian government must use other agencies, in addition to the police, the roles of the various agencies — Immigration, Prisons, Customs, DSS, NIS, the Armed Forces, etc.—should be clearly spelt out to avoid overlap of functions and for easy identification, and punishment, of breaches, wherever they occur.

“All security breaches by security agencies must be openly and strictly punished. Jail terms of not less than ten years without an option of a fine should be served any security officer or INEC staff or any individual that compromises electoral integrity in any form.”