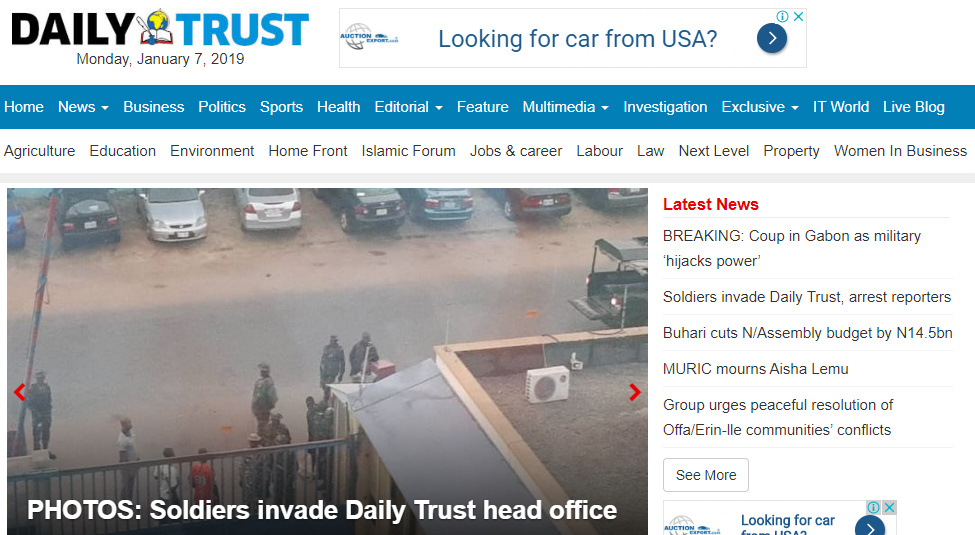 Several Civil Society Organisations (CSOs) and opposition leaders have condemned the invasion of Daily Trust offices and arrest of its journalists by the Nigerian military on Sunday.

PREMIUM TIMES reported how Daily Trust offices in Abuja, Kaduna, Borno and Lagos were raided. The armed soldiers, who stormed these offices, arrested the newspaper’s journalists and went with some of the media outfit’s gadgets.

This is not the first time under the Muhammadu Buhari administration that security agencies will carry out attacks on the press.

Reacting to the incident ‘, Amnesty International, via is official Twitter handle, said: “Nigerian authorities have obligation to protect freedom of the press @daily_trust as provided by the constitution & International human rights laws. #FreePress #Nigeria” – amnesty international

Also, the International Press Centre (IPC), in a statement signed by its director, Lanre Arogundade, described the development as a “fresh threat to freedom of the press.”

“A senior editorial staff of the organisation confirmed the military onslaught on the media establishment, stating that staff had been ordered out of the premises, laptops and computers seized and operations halted. No reason, he said, was given for the action.

“IPC considers this development as a fresh threat to freedom of the press as well as the freedom and individual liberties of journalists and other media professionals working in Daily Trust.

“The action of the military is also a threat to democracy with the presidential elections, less than two months away.

“The military is bound by the laws of the land and cannot, in any circumstance, be allowed to resort to extra judicial measures, no matter its grievances”, he said.

Another accountability platform in Nigeria, SERAP, in its condemnation on Twitter, said: “Attack on @Dailytrust offices and arbitrary arrest of their reporters, is an attack on Nigerians’ freedom of expression and media freedom and an affront to basic principles of human rights and rule of law central to democracy.

“@SERAPNigeria urges @HQNigerianArmy to immediately release all journalists of @daily_trust and reopen the media house. Assault on the media will further undermine Nigeria’s democratic credentials and the rule of law.

The presidential candidate of the opposition People’s Democratic Party (PDP), Atiku Abubakar while reacting, said: “I have received with concern, news of the sealing of Daily Trust corporate headquarters in Abuja. Freedom of the press is the bedrock of our democracy and nothing should be done to compromise it.

“If Daily Trust as an institution or any of its staff is in breach of the law, I recommend that due process be followed and not a resort to the jackboot,” Mr Abubakar advised.

In his reaction, the former governor of Ekiti State, Ayodele Fayose, compared the development to dictatorship.

“Before us is a full-blown dictatorship & I warned! Now in a democracy, Army invaded @daily_trust office, took its staff away! Ain’t we back to Buhari’s tyranny of 1984 when under Decree 4, journalists must not report information considered embarrassing to govt?”

Before us is a full-blown dictatorship & I warned! Now in a democracy, Army invaded @daily_trust office, took its staff away! Ain't we back to Buhari's tyranny of 1984 when under Decree 4, journalists must not report information considered embarrassing to govt?

“There is no legal basis for the action of the Nigerian Army against @daily_trust. The military’s action is a coup against democracy. This reckless act of impunity and tyranny must be condemned unequivocally. Press freedom is guaranteed by Sections 22 and 39 of the Constitution.”

There is no legal basis for the action of the Nigerian Army against @daily_trust. The military's action is a coup against democracy. This reckless act of impunity and tyranny must be condemned unequivocally. Press freedom is guaranteed by Sections 22 and 39 of the Constitution.

Before now, there have been several other attacks on the media and journalists by security agencies and operatives.

In 2018, a reporter with the News Agency of Nigeria (NAN), Taiye Edeni, was brutalized by security operatives, at the venue where President Muhammadu Buhari commissioned the Kaduna dry port.

Also, a Nigerian newspaper publisher, Daniel Elombah, who publishes elombah.com, was arrested around 4:30 a.m. on January 2, 2018, in his residence by SARS.

PREMIUM TIMES general assignment correspondent, Samuel Ogundipe, was also arrested and detained by police also in 2018, for carrying out his duties.

PREMIUM TIMES’ head office in Abuja was raided, the publisher, Dapo Olorunyomi, alongside Evelyn Okakwu, the newspaper’s judiciary correspondent, was arrested on January 19, 2017, over a story the army chief Tukur Buratai, felt uncomfortable with.

Timothy Agbor of The Point Newspaper and Toba Adedeji of the Osun Defender were also recently brutalised on duty in 2017 by police operatives while covering a protest by Nigerian Union of Local Government Employees at the Osun State House of Assembly.

Lagos pastor confesses to having 10 sex tapes with ex-lover