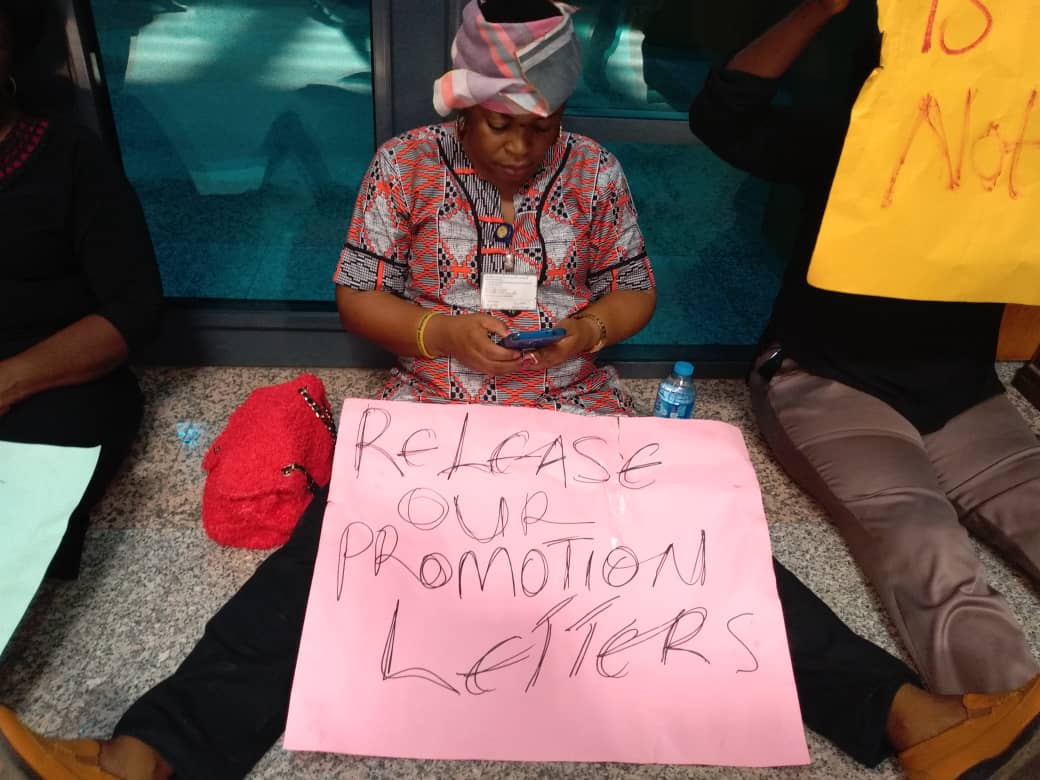 Workers protesting at the National Assembly

The Clerk of the National Assembly, Mohammed Sani-Omolori, has faulted the decision of the workers to shut out lawmakers from the chambers.

Mr Sani-Omolori said he had made several moves to forestall a face-off between the management of the legislature and the workers which manifested in a protest on Tuesday.

The workers, under the umbrella of Parliamentary Staff Association of Nigeria, blocked the entrance of both chambers of the National Assembly, preventing lawmakers from entering.

Among other things, they demand the implementation of Consolidated Legislative Salary Structure (CONLESS), enforcement of promotion and training of staff.

They vowed not to allow lawmakers hold plenaries until they received notification of payment.

The workers also accused Mr Sani-Omolori of denying them their entitlements for up to eight years and blocking the enforcement of CONLESS.

While the protest was still ongoing, Mr Sani-Omolori showed up at the National Assembly noon on Tuesday.

“It is a matter that has been on for some time. They are despondent and we have also tried to explain to them that the payment of… There was an increase and we approve an increase payment for them which was captured in the 2018 budget. But as it is today, it is a common knowledge about the level of implementation of the 2018 budget, especially the new addition which has not been implemented. The money is not released, there is no way we can effect the payment.”

The Clerk said it is wrong for the workers to stop elected lawmakers from sitting.

“We told them it is wrong (to stop lawmakers from entering chambers). We tried to prevail on them to do things in the correct way. As a matter of fact, I wrote to them. I don’t know whether you have seen my response. I also had series of formal and informal consultations with their leadership all through yesterday in a bid to make them back out of what is clearly an act that is not in tune with even their own rules. As you can see, here they are.

“I am worried that a situation where you think that people should be able to look at things properly and then they are not looking at it, that is my worry.”

Mr Sani-Omolori enjoined the workers to be patient.

“I still insist they need to be patient with the system. Like I said in my reply to them, in an unprecedented manner, the presiding officers acceded without hesitation to their request for this percentage. It was agreed with them. It was bargained and we came to that agreement and they captured it in the budget. So how is it within their powers if the money is not released?

“And in any case, the reality on the ground is that it is not even the National Assembly that is suffering from the non-release of funds, it is confronting everyone. I think we all have to be patient with the time and the system,” he said.

At 2.15 p.m., when this report was compiled, the protest was still ongoing.