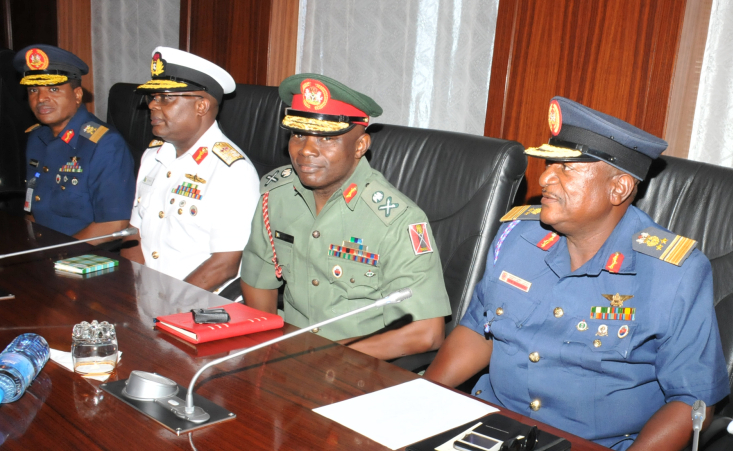 The Nigerian Presidency has described the appearance of service chiefs at Sunday’s launch of President Muhammadu Buhari’s campaign manual as “mistaken assumption.”

Mr Buhari on Sunday presented his campaign document at an event tagged “Next Level 2019” which held at the State House Conference Centre, Abuja.

The nation’s military chiefs were reportedly at the event but left early.

Pictures of the service chiefs went viral on social media with most commentators condemning the “politicisation of security agencies.”

Punch Newspaper also allegedly published a report on the appearance of the military top brass leading to an explanation by the presidency.

The spokesperson to President Muhammadu Buhari, Garba Shehu, in an email to PREMIUM TIMES Monday evening said,
“Punch should have asked what brought the Service Chiefs to the “Next Level 2019” event at the State House, only to leave before it got underway”.

Mr Shehu said the military chiefs were “mistaken in their assumption that this was a non-political event, to showcase the achievements of the administration, the success of which they are a part.”

He also said hardly were they seated “did the Minister of Defence, Brigadier General Mansur Dan AlI (Rtd) ask them to leave as this was a political gathering.”

Mr Shehu added that the military chiefs “quickly left, even before the arrival of the President and for the event to get under way. The fuss over this in therefore absolutely unnecessary.”

EXCLUSIVE: 10 Nigerian banks paid over N1 billion as emoluments to top directors in 2017