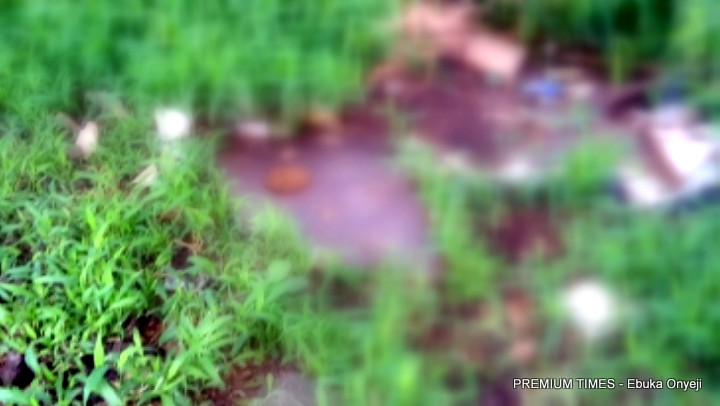 pile of shi*ts in a valley beside Wuse zone 3 walkways.

Abuja, Nigeria’s capital, is gradually turning into an open field where people defecate without restraint, recent checks by PREMIUM TIMES have shown.

Beneath the good roads, exotic cars and gigantic edifices the Federal Capital Territory is adorned with, are long shadows of irritating sights of human excreta.

Passing bodily wastes in open areas has become a norm that thrives in many parts of the city, especially in the slums and suburbs.

The United Nation Children’s Fund, UNICEF, says of the 25 per cent or 46 million Nigerians who defecate openly, 33 million of them are living in rural areas.

In Abuja, the menace is more prevalent in slums such as Mpape, Kpaduma and Dakibiu due to obvious reasons. They are overcrowded informal settlements with no permanent structures, little or no access to potable water, inadequate sanitation and no drainage or waste management system. Many houses in such areas do not have toilets.

However, it has become more worrisome that these eyesores are increasingly becoming a common sight in major streets in highbrow areas of the Nigerian capital.

Market places, motor parks, green areas, drains, under bridges and bus stops in Abuja have become easy to reach toilets in the absence of alternatives.

In no particular order, PREMIUM TIMES brings you five notorious spots where people defecate openly in the heart of Abuja

One spot that has surprisingly and unbelievably gained notoriety for this indiscriminate act of open defecation is the walkway before the head office of the Nigerian Customs service at Wuse Zone 3.

One will wonder where such horrible stench is emanating from when passing through this road directly opposite Neighborhood Market, a stone throw from the Customs Office.

Until you look behind the trailer containers painted yellow and black and parked along the walk ways… Bingo!!! Mounds and mounds of faeces of different sizes, shapes and varieties both fresh and old is all you will see.

Even the valley below also serves as a valley of convenience. The fact that this is an area that houses many major government agencies, popular markets, plazas, fast food joints and also a route to other major areas in the city makes it more appalling.

Still, authorities have done little or nothing to check this menace.

From 6 p.m. upwards, people can be seen squatting behind the containers and or below the valleys. They even do it in the walkways, on many occasions.

The streets within the popular Utako Park in Jabi, where public transport vehicles going in and out of the city converge, are some of the places you do not want to pass in the morning.

As it is, one can hardly walk through the streets facing the two hind gates of the park and have a breath of fresh air. The foul stench from faeces and urine that attacks passers-by leaves the environment undesirable.

Though there are four public convenience houses at strategic points inside the park – owned and managed by private individuals – yet people working in the park resort to making use of the streets and walk ways as places to empty their bowels.

They are unwilling to pay the N30 fare in the park’s public toilets. Ironically, a remote office of the Abuja Environmental Protection Board (AEPB), whose main responsibility is to keep the nation’s capital clean, is situated right opposite these scene of squalor.

A female official of AEPB in the office said their mandate is not to keep the area clean but to catch hawkers.

She said they have repeatedly tried to stop people from passing bodily waste in the area but have been threatened with knifes and sharp objects by touts in the park.

“Sometimes they will even do it in front of our office and if we talk they will threaten us with knives and sharp objects. There is no way we can control them without police or security operatives. Our supervisor at the office is aware of this. Even the FCTA came here and saw what is happening. We want to put a signpost there but will they even obey?”

It is common to start perceiving offensive odour when caught up in the traffic, waiting to board a public transport or alighting from one or even walking along the ever busy traffic light at Jabi garage junction directly opposite Con Oil filling station.

The stench is not far-fetched. Look closely below a dwarf fence along the walkway before the traffic light. There are piles of faeces and traces of urine.

These body by-products look fresher in the early hours of the morning as it is mostly done during the night.

People usually cover their noses with their hands or handkerchief to avoid inhaling foul odour while passing through mostly lonely parts of the popular Wuse Market, the biggest in the city.

This is especially worse in the early hours of the day as the environment may have been fouled during the night.

Though there are public toilets inside the market and there are no traces of body wastes inside the premises but gardens, walkways and shadowy corners surrounding the market provide spots for quick convenience.

Underground stairs, leading to other routes in the market area have been turned to public latrines. Be careful while passing through such routes or you might step on one.

Gwarimpa express is a stop away from Kubwa express when coming from Wuse. “Driver, stop me at Gwarimpa express”, a passenger who wants to alight at this bus stop would say. Before this stop is a long pedestrian bridge that connects other parts of the popular Gwarimpa estate and that is why the stop is known as Gwarimpa express.

There is a big gutter on the right side of the road and many have turned it into a safe spot for convenience. You can see piles of faeces while passing or waiting for a commercial vehicle at the bus stop.

Other areas such as Area One Roundabout in Garki, Okonjo Iweala Street in Utako, Julius Berger Bus stop, Mabushi Roundabout, to mention just a few, are common spots where people answer the call of nature in the heart of Abuja.

Why Open Defecation is increasingly prevalent in Abuja

Abuja residents have pointed out that the absence of public toilet facilities, failure of some house owners to provide toilets, limited land space and deep-rooted social norms are factors responsible for this menace.

More worrisome is the fear among residents that the act of indiscriminate defecation coupled with the rains which is at its peak might result to in outbreak of diseases in Abuja if not checked.

Earlier in August, the Federal Capital Territory Administration (FCTA) announced that seven deaths were recorded from the outbreak of cholera in four communities in Abuja. Two deaths were recorded in Kubwa village, one at Sauka, another two deaths at Mpape and two at Ushafa while 58 cases were listed in the recent outbreak.

The FCTA attributed the outbreak to little or no access to potable water, inadequate sanitation, no drainage or waste management system and rampant open defecation in many communities in Abuja.

When presented with findings of this report, Muktar Ibrahim – head of information & outreach program unit of the AEPB, the agency responsible for keeping Abuja clean, said, “There is a law against open defecation and the FCT is doing a lot to stop such incidences by ensuring that all public places especially, plazas, bank, fuel stations, eateries make their conveniences open for public use.

“Some of these locations lock up their rest rooms so we have been going round to ensure that they have functional toilets that are also open for use.”

He also attributed the growing menace of open defecation to influx of people into Abuja which have stretched the capacity of the city to cope with the population.

He said a committee had been set up by the FCT administration to probe the situation.

However, health experts are more concerned with the overwhelming health challenges posed by this menace. They say a gram of faeces contains approximately 10 million viruses, one million bacteria and a thousand parasite cysts.

A top UNICEF official, Zaid Jurji, linked open defecation with many cases of cholera, diarrhoea, and typhoid fever in the country. He noted that over 88 per cent of diarrhoea cases, the fastest killer of children under the age of five in Nigeria, is caused by open defecation.