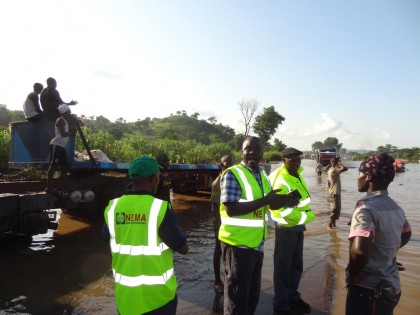 Mustapha Maihaja, Director General, NEMA, made this known on Saturday in Abuja during a meeting of NEMA with stakeholders to assess the reports from the fact finding committees after visiting the flood prone states.

Mr Maihaja said that the agency has immediately swung into action in case there are more worrying indications of a looming flood.

He said that reports from the fact finding committees are worrisome as some states including Niger, Kogi, Delta and Anambra have already started witnessing flooding.

“We are here today to assess the already alarming situation, with declaration of red alert done on Sept. 7.

The declaration further culminated to the constitution of six committees that went round twelve states.

“NiMet has reported that from today to the next 72 hours, there would be continuous rain in the North, the Central and the Southern States of Nigeria.

“NHISA has reported also that today, the levels at the measuring stations, at the confluence of the Rivers Niger and Benue at Lokoja is 10.98 meters.

“This confirms that the volume is still increasing and with the threatening inflow at Lagdo Dam, with the level as at yesterday recorded at 21.4 meters when compared to the highest level.

“They will be forced to discharge at 21.6 meters that means we are left at 0.2 meters to get to that level and the continuous inflow makes it more worrisome,’’ Mr Maihaja said.

Mr Maihaja said that it was on that note that stakeholders under the coordination of NEMA have activated a National Contingency Plan, a policy document, which gives NEMA the power to establish operational structure.

Mr Maihaja said that EOC A, will be responsible for operations in the following States; Kebbi, Niger and Kwara States.

He said that EOC B will be responsible for operations in Edo and Kogi States, while EOC C will be operational at Amambra and Delta States.

Mr Maihaja said that the NEMA situation room was also being activated for collecting data, analyzing the data for information sake to guide the operations of the national EOCs and the Zonal EOCs.

He said that the nation would be given regular information and updates on further developments.

The News Agency of Nigeria (NAN) reports that on Friday, President Muhammadu Buhari ordered Maihaja to declare a “national disaster’’ in the event that anticipated flooding turns a reality in some parts of the country.

The president’s directive follows a warning from NHISA that Rivers Niger and Benue have almost reached the levels that resulted in the 2012 flooding.