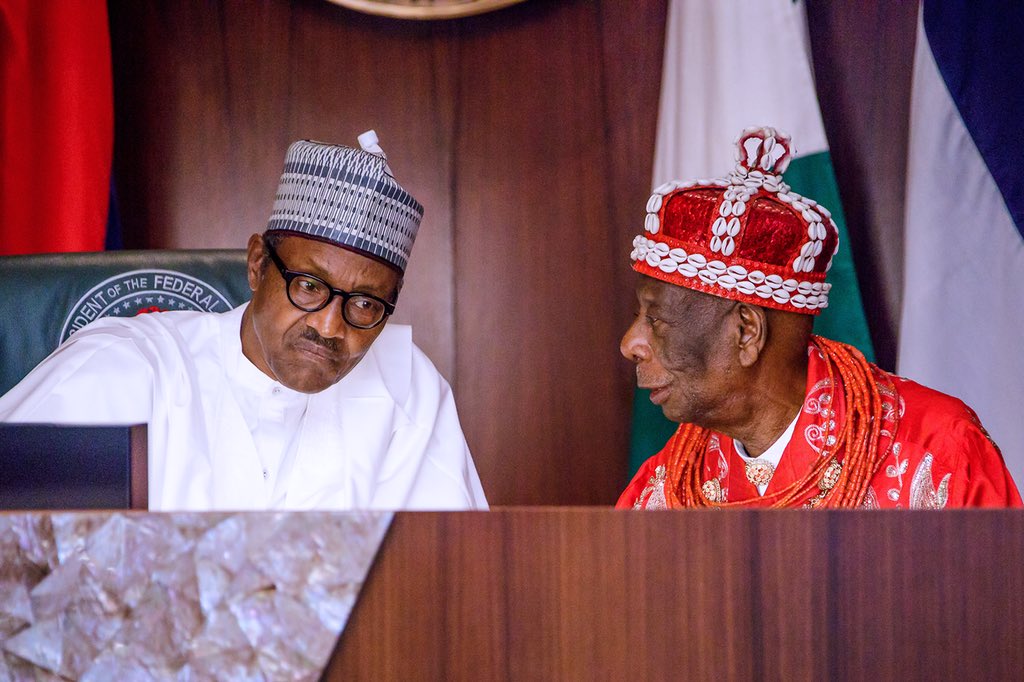 An Ogoni monarch has conferred a new chieftaincy title on President Muhammadu Buhari, a presidential aide has said.

An Ogoni king, G.N.K. Ogininwa, announced the title of “Meni-Doo-Lenu’’ for the president when he led a delegation of the Niger Delta people to see Mr Buhari in Abuja, Femi Adesina said in a statement sent to PREMIUM TIMES.

The title means“the King of Doing Good Things in Ogoni-land.”

Ogoni-land in Rivers State is one of the major oil producing areas of Nigeria. The community is well known for its various problems with oil major, Shell, which extracted oil from the community for decades.

Ken Saro-Wiwa, the playwright activist killed by the Sani Abacha military dictatorship was killed for championing the cause of the Ogoni.

His matter was among the issues the Ogoni leaders raised with Mr Buhari.

President Muhammadu Buhari Friday in Abuja assured Nigerians that the country’s resources will be retained and utilised for the benefit of all citizens, with a strong focus on infrastructure.

“We will not abuse the trust. What belongs to Nigeria stays in Nigeria and will be utilised by Nigerians,’’ Mr Buhari told a delegation of Ogoni leaders from the Supreme Council of Ogoni Traditional Rulers and elected leaders of MOSOP at the State House.

The president said the challenge of infrastructure in Ogoni-land would have been long resolved with more focus and commitment to improving the lives of the people, instead of the award and re-awarding of contracts without implementation.

President Buhari urged the leaders to prevail on their youth and sensitise their communities more on the benefits of the clean-up process, especially with the involvement of the international community.

“Certainly I am aware of the challenges in Ogoni-land. But I want to appeal to you as institutionalised leaders to speak more to the youth. With patience, we will prevail together in restoring the environment, especially with involvement of the international community,’’ he said.

The president noted that the degradation of the environment over the years had undermined the economy of the Ogoni people, adding that commercial farming and fishing will pick up after the restoration.

“We are working hard to change the situation. I know that if we had power in the country, many Nigerians will create and face their businesses,’’ he said.

In his remarks, the leader of the delegation, King G.N.K. Ogininwa commended the president for the achievements recorded in restoring security and the economy, while calling for more federal government attention on the plight of the people in Ogoni-land.

“Through you, Mr President, we will achieve great things in Ogoni-land,’’ he added.

Mr Ogininwa conferred the title of “Meni-Doo-Lenu’’ on the president, meaning the “the King of Doing Good Things in Ogoni-land’’.

A member of the delegation, Walter Ollor, presented a list of the needs of the Ogoni people, which includes a national recognition for the Ogoni 12, which includes Ken Saro-Wiwa, improved security and establishment of a Centre for Environmental Excellence.